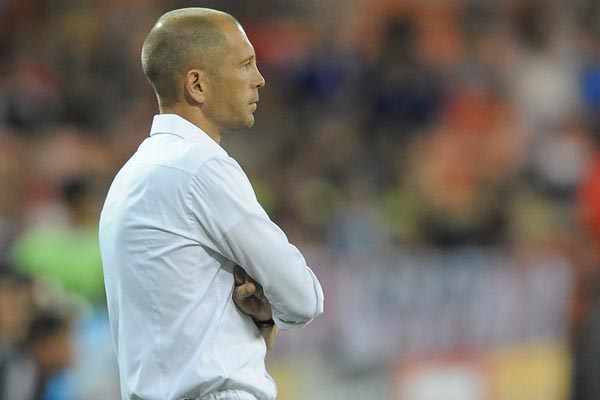 The 2015 MLS playoffs resume after the international break with the opening legs of the conference semifinals. Prior to the interruption in the schedule, most of the talk concerned the payrolls and designated players still involved in the 2015 MLS postseason. Both numbers are smaller than anyone expected, with MLS once again caught up in differing visions for how to build squads.

Among the remaining teams is FC Dallas, notable for spending more on youth development than on bringing in first team players. In the East, the New York Red Bulls went from a club spending on big name players to winning the Supporters’ Shield without them. Whether or not the 2015 playoffs will serve as an indictment on how MLS clubs conduct their business is an open question, but the biggest payrolls didn’t get this far.

This season looked like a potential disaster for New York. With no replacement for Thierry Henry and firing their popular coach before the start of the season, the expectations weren’t high for this version of the Red Bulls. Instead, under new sporting director Ali Curtis and his pick for head coach Jesse Marsch, New York turned into the best team in the Eastern Conference. Sure, it’s an expansion season with both of those teams in the east, but that doesn’t downplay the work the Red Bulls put in.

Much of that was producing opportunities for striker Bradley Wright-Phillips. Seven goals separates Phillips in 5th-place on the scoring chart with Lloyd Sam, the next Red Bull, in 17th. It’s no secret where New York’s production comes from. Though Phillips was ten goals lower than last season’s league leading performance, he did enough to help New York win games. Getting the balance right between points and individual production is nothing new in MLS.

For Columbus, this was a team that hung around long enough to end up 2nd-place in the East. There was no clear advantage between the two in the regular season. New York won 2-1 at Columbus way back in week three. That was the same score when Columbus won at home on July 4th and New York won at home on October 3.

Columbus coach Gregg Berhalter has done an excellent job understanding what MLS is right now. He’s not trying to push a vision of what MLS might become and he’s certainly not falling into the trap of thinking it’s still what it was even a couple of seasons ago. That’s a clear advantage for a club that doesn’t have to risk over or under spending on its squad. Berhalter found a sweet spot this season, and it might be enough for a title. That’s a win for Columbus, of course, but it should also have other clubs rethinking their direction in a league with limits.

What this means in the 2015 Eastern Conference finals is no clear advantage for Columbus. This should be a close series that New York wins.

The Western Conference is tough to call this season. Picking FC Dallas to finish in 1st-place meant overlooking the money spent by the Sounders and the Galaxy. It also meant downplaying the Galaxy as defending champions even without Landon Donovan. Any combination of that went too far in flattering FC Dallas. We all get it by now. FC Dallas spent in player development and they’re playing the players they’ve developed. It’s not an unfamiliar model for clubs around the world.

What it means right now is a competent strategy for getting to the 2015 MLS Cup final. They’ve already knocked out the big spenders in the semifinals in a playoff scenario where the Sounders already took care of the Galaxy. Portland had an easier semifinal, but that might have told us more about Vancouver than the Timbers. It’s the Whitecaps penciled in as the biggest playoff disappointment. For Portland, they still have plenty to prove.

Right now, Dallas is all upside. They won the West and showed they can take a series against a team with high profile and high cost veteran players. Getting to the MLS Cup final in 2015 isn’t as crucial for this club as it is for those high payroll teams. There’s nothing for Dallas to prove. They’ve already ticked the appropriate boxes to call this season a success. They’re also the team that should advance to the 2015 MLS Cup final.