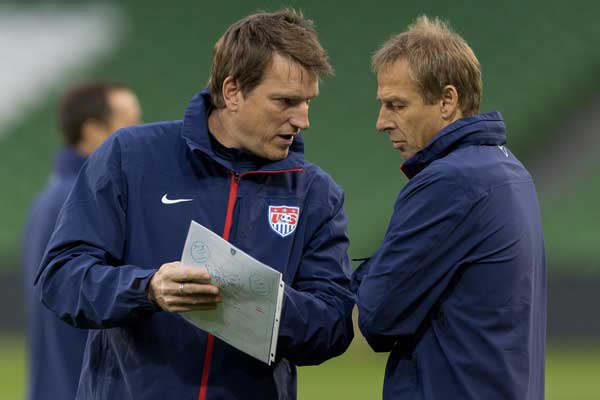 By Charles Boehm – WASHINGTON, DC (Jan 7, 2016) US Soccer Players – Jurgen Klinsmann has broken plenty of new ground in his time at the helm of the USMNT. But the past year or two featured some striking similarities to the reign of his predecessors, particularly in terms of the “second-cycle syndrome” that seemed to hang over the program for so much of 2015. Now we’ll watch and wait to see whether 2016 brings evolution, or merely deja vu, starting with the annual January camp that begins in Carson, California this weekend.

After some tinkering with its purpose and format, Klinsmann has brought this year-opening event back towards its original roots. Youngsters and less-familiar domestic faces are being given a chance to impress, including a big chunk of the Under-23 group that faces a tough Olympic playoff series vs Colombia in March.

“It will be more an identification camp. It will be more a developmental camp,” Klinsmann explained in remarks distributed by US Soccer for Wednesday’s roster release. “We want to give those players a head start into their very busy year 2016, but we also want to make it clear to them that it’s a huge opportunity that you have here to understand what it takes to step it up and to become an international-level player.”

In general terms, the USMNT’s MLS contingent is being offered a chance to trim down an offseason break that Klinsmann has questioned. Iceland and Canada will provide worthy, if manageable, opposition in the friendlies that await at month’s end. Yet, perhaps it remains that the more things change, the more they stay the same.

Much of the chatter among US fans this week centers on striker Jordan Morris, who has officially turned pro after leading Stanford University to the NCAA national championship last month. Morris must decide between accepting a Homegrown Player deal with the Seattle Sounders or trying his luck in Europe. He’ll report to January camp later than the rest thanks to a “training stint” with German club Werder Bremen.

It’s more than just keen interest in the next destination of one of the USMNT’s most promising young players. It’s the fact that Morris is the subject of some head-turning quotes from Olympic coach and top Klinsmann assistant Andreas Herzog to the German media that reopen the “MLS vs. Europe” debate yet again.

Leaving little doubt that he and Klinsmann played a role in arranging Morris’ junket, Herzog told both Kicker and Bremen-area publication Die Kreiszeitung that “our goal is to get as many players to Europe as possible” and suggested that Morris could be a worthwhile free transfer for the Bundesliga club.

“It would be a good deal for both sides,” Herzog told Kicker. “Bremen gets a promising, certainly not quite finished player … I trust him to make the leap.”

Nearly four years ago I wrote a column about this topic in which I noted that Bob Bradley – though he hardly ever spoke openly of it – was every bit as eager to chaperone his national teamers on to bigger and better leagues as Klinsmann. Sometimes Bradley helped showcase their abilities with timely call-ups and match appearances. Not unlike the active role Klinsmann has taken in counseling the likes of DeAndre Yedlin on their transitions across the Atlantic.

Now, we find ourselves back in similar territory again, albeit with a bit more sound and fury thanks to Klinsmann and Herzog’s recurring series of blunt statements on the matter.

“It’s a new year and it’s still the same old topic we’re talking about,” noted ESPN analyst and USMNT alumnus Taylor Twellman on Wednesday. “Every coach in the entire world wants their players playing at the highest level. He’s not the first national-team coach [to feel that way], nor will he be the last. [But] why are we doing this now?”

Fans can only hope that Herzog and Klinsmann – who just a few weeks ago publicly urged Morris to find a club destination where he’d gain regular playing time – are communicating a more nuanced message in private.

“The way I look at it, it can’t be a general topic,” said Twellman. “You can’t say every player needs to be playing in Europe… I think it’s based on each individual, and I think that’s the way Andreas Herzog and Jurgen Klinsmann should address it publicly. But I’m not shocked. It’s the new year and it’s the same story.”

Herzog’s words naturally prompt another question: Will other players be provided with international exposure in Southern California this month? Who else might gain the attention of European clubs searching for midseason reinforcements in the winter transfer window?

While certainly not a new practice, watching US talent get ushered into the overseas shop window tends to be an intriguing pursuit nonetheless. Perhaps it’s as fitting a way to kick off 2016 as any other.