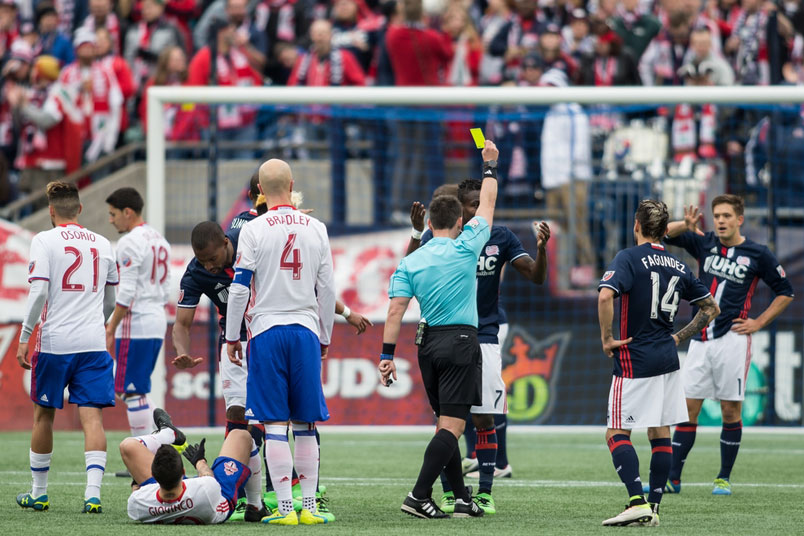 By Jason Davis – WASHINGTON, DC (Apr 20, 2016) US Soccer Players – Peter Walton made his name refereeing in his native England, where he worked his way up from small, local leagues to the Premier League. He spent nearly a decade officiating some of the most intense, competitive, and closely scrutinized matches in the world. He not only came out of the experience no worse for wear, he parlayed his career into role as head of Professional Referees Organization, a new body meant to oversee and improve the level of officiating in North America. It sounds like it should be a cushy gig.

Walton started at PRO on April 2, 2012. Four years later, it seems very clear that the job remains an ongoing effort. Already in 2016, we’ve seen a series of wrong and competitively disastrous calls laid directly at the feet of referees operating under PRO’s auspices. A new push to punish physical challenges has caused a rash of red cards. Michael Parkhurst of Columbus Crew SC was red carded for denying a goal scoring opportunity when he was nowhere near the play in question. Major League Soccer’s disciplinary committee had little choice but to rectify the situation days after the fact. Sunday’s Orlando City vs New England match saw a missed handball and a wrongly called handball. Players, fans, and coaches are in an uproar.

When games are changed by ejections, handballs, and missed calls the people with the most on the line, be it livelihood or emotion, can’t help reacting with passion.

Walton, as the face of the group that’s supposed to make it better, is quite often the main target of the animus. Even when anger is directed at the individual referees themselves and not Walton, it’s Walton that steps out in from to blunt the criticism or attempt an explanation.

Over the past couple weeks, Walton has been a very popular figure within MLS media circles. He’s held a conference call to answer questions about the rise in red cards. He’s been on ESPN discussing controversial calls and defending his referees against withering criticism. We should expect to hear from him regularly throughout the season, explaining just how difficult the job is. That’s because unless MLS referees dramatically improve in short order, we’re bound to see plenty more calls that send managerial blood pressures into the stratosphere and fans threatening to find something else to do with their time if the standard doesn’t improve.

And that’s how Peter Walton, a retired referee, became that more popular man in American soccer circles. It says a lot – and none of it good – that Walton’s phone keeps ringing.

But here’s a question that seems pertinent given the state of refereeing in MLS and around the world and the league’s desperate desire to not only make it better, but use it to change the culture of the competition: Should we blame Walton, or should we feel sorry for him?

Walton is the head of PRO after all. As the boss, it’s fair to suggest that the buck stops with him. PRO exists with the express purpose of making refereeing better. A quick poll of MLS coaches, players, fans, pundits, your choice here… all would likely agree that the officiating hasn’t gotten better. If and when a game turns on a bad call made by a referee who works for PRO, Walton deserves the heat. He asked for it by taking the job.

Walton is also a victim of the circumstance. That circumstance being the shallow pool of talent available to PRO and the deficit of a quality refereeing tradition in North America on which to lean. Further, the game is faster, more athletic, and therefore more difficult to referee than ever before. It’s not just MLS having problems with poor calls. Just last weekend, Premier League leader Leicester City ended up with a controversial draw thanks to a series of questionable calls made by a referee some claim wasn’t ready for that stage.

Walton is keenly aware of the problems modern referees face. He’s joined the chorus coming out of MLSHQ in calling for instant replay. Advocating for technology as a tool to aid referees in making the right decision is easily defensible in a superficial manner, but that doesn’t necessarily mean it’s the right direction for the game of soccer. The issues with instant replay mostly revolve around the rules governing its use. There’s also the consequences for the referees themselves. Instant replay as a catchall isn’t an answer, and instant replay as Pandora’s box should chasten everyone involved.

Walton’s job is hard, but it’s not as hard as that of the referees themselves. Walton would likely say the same. He does have a role to play in developing new referees, and despite problems of recruitment caused by the thankless nature of the job, he can’t shirk that part of his duties.

Whether we blame him or feel sorry for him, what we can be sure of is that the less of Walton we see, the better things must be. So it’s with as much respect as we can muster that we wish Walton a quieter, cushier gig, out of the spotlight and behind the scenes.