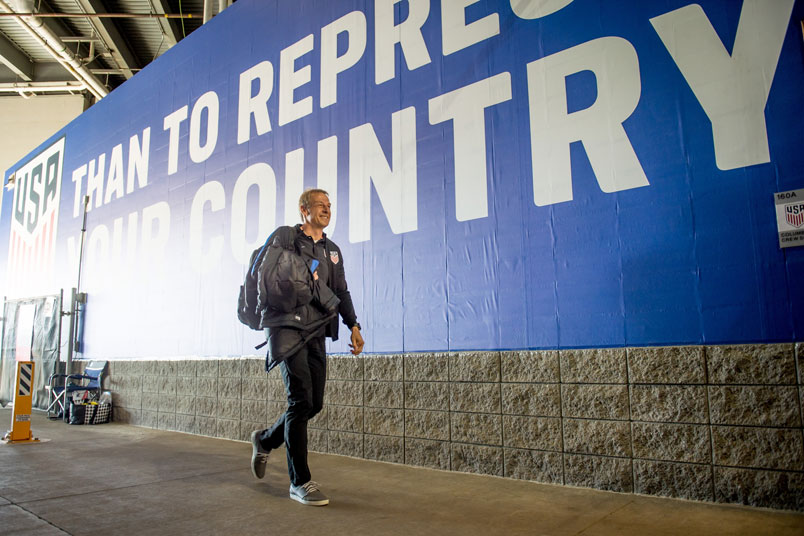 By Jason Davis – WASHINGTON, DC (Apr 27, 2016) US Soccer Players – It’s easy to describe Jurgen Klinsmann’s approach to Twitter as boosterism. The USMNT head coach occasionally sprinkles in a tweet addressing things that fall outside of the scope of his constant cheerleading. He used it to shoot down rumors he’s up for the manager’s job at Everton, as an example. However, for the most part he is committed to the notion that Twitter is there to give virtual high fives to American players around the world.

The question is whether Klinsmann’s tweets carry any weight, or if they’re merely window dressing accentuated by a greater-than-is-necessary number of exclamation points. The man really enjoys throwing them around.

If it really is just virtual jobs well done, than Klinsmann is doing his part to encourage young American players and perhaps spreading the word about their exploits via his significant worldwide soccer profile. No matter how the USMNT fan base and the American soccer media perceive him, Klinsmann’s opinion still matters across much of the football landscape. German and English ears always perk up when the affable figure from their soccer past decides to dispense with his particular brand of wisdom. Detractors often go unheeded because Klinsmann’s playing resume is unimpeachable and his attitude is so infectious.

If there’s more to it, the coach might be publicly acknowledging who is on his radar.  National team coaches are always on the lookout for new talent to bring into the program, and Klinsmann casts a wider net than most. As USMNT boss the German might have a poor relationship with MLS, but he has also been equal opportunity when it comes to picking out potential contributors from below the top level. Miguel Ibarra, Jordan Morris, and even Julian Green stand testament to Klinsmann’s open mind.

If Klinsmann’s tweeting means anything, then Christian Ramirez could be the next under-the-radar name to get that chance. The Minnesota United forward drew Klinsmann’s attention for his game winner against the New York Cosmos on Saturday. That goal came with his team down a man to the defending NASL champions. Ramirez is not a new name to the most attentive USMNT fans thanks to his exploits with MUFC over the past few years in the same team where Miguel Ibarra earned his own call-up into the national team, but he’s not exactly playing under the brightest lights. For Klinsmann to recognize what Ramirez is doing in America’s second division could indicate that he’s eying something bigger for the player.

Klinsmann dropping hints would also be big news for Fabrice “Fafa” Picault, a Haitian-American attacker currently doing good work with St Pauli FC of the 2. Bundesliga. Picault played in the NASL for the Fort Lauderdale Strikers as recently as 2014, making him another product of that competition that Klinsmann is taking an interest in. Picault scored for St Pauli on the weekend in a 1-1 draw against Dusseldorf, prompting the USMNT head coach to tweet his congratulations.

Of course, time will tell if Klinsmann’s social media spotlight is a precursor to a shot with the USMNT for either Ramirez or Picault. Admittedly, it’s a big leap to assume that a soccer coach sharing soccer highlights on Twitter is deep insight into which players he is considering bringing into his international soccer team. Then again, Klinsmann isn’t the typical coach and this isn’t a typical situation. His role as facilitator of the growth of American soccer runs parallel to his task of putting a winning team on the field. Klinsmann has to try to guide them both simultaneously.

If the tweets about Ramirez and Picault lead nowhere, at least Klinsmann is keeping an eye on players like them. Maybe somewhere there is a young American superstar-in-waiting who is pondering the best path for his career, international soccer included. It was probably true for years that if that young player wanted to get into the USMNT, he had to join MLS, a league in Europe (Germany, England, France, but also Sweden, Denmark, Holland), or head south to Mexico. With Klinsmann, that doesn’t necessarily have to be the case. Not every player with potential is going to get a high profile offer from a major European club or find themselves helping a first division team get into European competition.

NASL teams can now point to Miguel Ibarra as evidence that playing in that league means there’s a shot at the USMNT. Christian Ramirez certainly knows that. Now, he also knows that Klinsmann is paying attention.