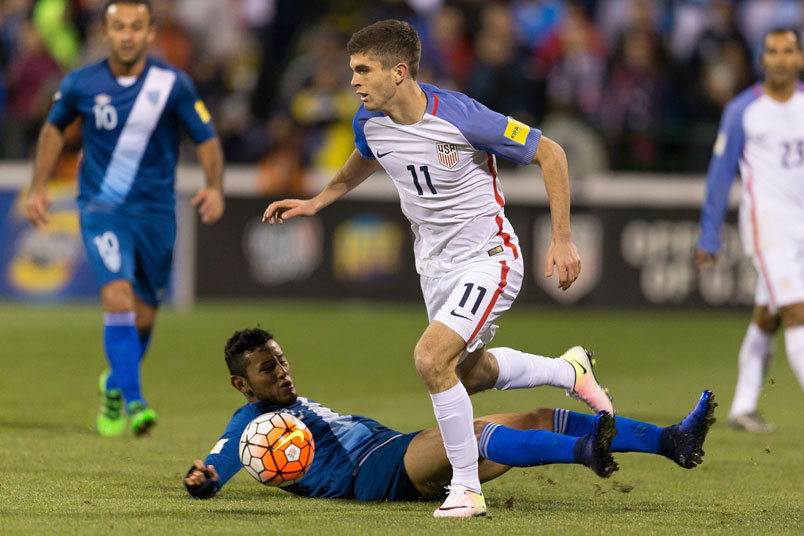 By Charles Boehm – WASHINGTON, DC (Apr 28, 2016) US Soccer Players – USMNT coach Jurgen Klinsmann has repeatedly underlined the historic significance of the Copa Centenario as this summer’s blockbuster tournament draws near. He called it “the biggest competition in the United States since the 1994 World Cup” in a USSoccer.com Q&A.

So it’s interesting to note Klinsmann’s decision to highlight, in nearly the same breath, his eagerness to reward the distinguished efforts of the youngest players in his pool with places on this summer’s squad. It looks like the latest instance of a recurring Klinsmannian tableau: Cultivation of intergenerational rivalry in search of motivation and competition.

Like the bursting blooms of spring flowers, the exploits of fresh-faced kids have yet again renewed the sense of optimism that usually surrounds USMNT fandom. By and large, it’s been a trying year or two for the program. While every goal, highlight, and man-of-the-match performance by a national teamer is celebrated and savored by the supporters, it’s human nature to take a different kind of hope from the achievements of newer faces.

Right now, the kids have given us a good deal to smile about. The hottest spotlight presently falls on Christian Pulisic, of course. He’s hauled himself onto the mighty Bundesliga stage and set records in the process. Whether you see it as the rise of the next American superstar or simply a matter of good timing, the 17-year-old is already more than a deserving member of the Copa America team. He’s a potential starter. Pulisic is still just one game into his USMNT career.

“For Christian, obviously, it’s been a very exciting ride over the past couple of months,” said Klinsmann of Pulisic. “With the statements he sends out there – scoring his first goal for [Borussia] Dortmund, starting a game in the Bundesliga, getting valuable minutes in that very intense environment – he sends messages out toward what happens with the national team as well. He makes himself a case, similar to other players who are trying to get on the right track now, trying to perform with their club teams and knock at the door, breaking into the 23-man roster for the Copa America.”

Klinsmann has repeatedly emphasized the need to pick a full-strength roster to face off against elite opponents like Colombia, Paraguay, and Costa Rica. Yet, his idea of “full-strength” has nearly always included head-turning inclusions, often younger ones. He already seems to be preparing everyone for more of the same when the final lists are due late next month.

Consider as well the coach’s conspicuous praise for the likes of Ethan Finlay and Darlington Nagbe, both players well into their 20s but relatively new to the USMNT setup. There’s also the explicit acknowledgement that Fafa Picault is attracting attention. The scene is set for challenges to incumbency, even as elder figures like Clint Dempsey and Jermaine Jones keep themselves in pivotal positions of importance.

“A couple weeks down the road, we are going to name a 23-man roster which will not be easy for us coaches, but it is just a fact that we can only take 23,” Klinsmann said. “It’s definitely good to see young players like Christian, Jordan Morris or DeAndre Yedlin, who is playing almost every game for Sunderland from the beginning on, coming out really strong and sending statements to their coach in the U.S. that they want to be in the Copa America.”

The calendar may further empower Klinsmann’s desire to stoke internal competitiveness. He will gather his European-based contingent, and possibly parts of the USMNT’s Mexico brigade, in Miami for a camp next month before welcoming his MLS players closer to the tournament’s opener vs Colombia on June 3. They’ll arrive in battle-hardened, end-of-season shape with their club campaigns freshly concluded.

That probably means a rigorous training regimen in Florida’s tropical heat. Klinsmann will use this to help determine who among his foreign legion is ready for June. Then he adds MLS layers who will need to to catch up to speed as quickly as possible.

If all this talk of a cutthroat practice environment makes you fret about the risk of overtraining and injury exposure before the Copa America has even begun, you’re not alone. That’s a concern that only Klinsmann himself can resolve.