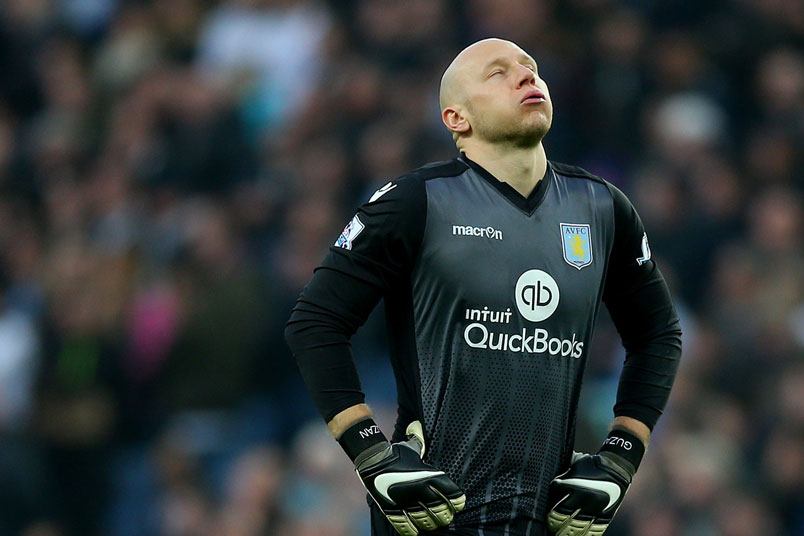 By Clemente Lisi – NEW YORK, NY (May 9, 2016) US Soccer Players – Aston Villa fans staged a unique protest in its final home game of the Premier League season Saturday by throwing beach balls and balloons onto the field with 16 minutes left to play against Newcastle. The protest at Villa Park was to show contempt for the club’s American owner Randy Lerner as the sides played to a scoreless draw. One fan even tossed an inflatable pinata among the multi-colored balls that littered the field. It was the perfect symbol for Aston Villa’s awful season.

Aston Villa was a pinata throughout much of the 2015-16 season – amassing just three wins and rooted to the bottom of the table since October – while its battered fans endured defeat upon defeat, a terrible end for a storied English club. The start of the Lerner era had promised so much, but in the end delivered very little. To say Villa fans are upset is an understatement. Lerner has unsuccessfully been trying to sell Aston Villa since 2014, picking up the nickname “the absentee American.” Reports out of England this past weekend say that a Chinese investment group is interested in buying the team. Whoever is in charge, it will be up to them to return Aston Villa to the top flight.

Lerner was part of a growing number of American owners a decade ago who decided it was wise to invest in foreign soccer clubs. Fans greeted their choice with skepticism, not convinced American dollars were the solution to winning trophies. Aside from Aston Villa, Americans own four other clubs that competed in the top flight this season: Arsenal, Liverpool, Manchester United, and Sunderland.

When Lerner purchased the Birmingham-based club in 2006, he promised success and vowed Aston Villa would “compete at the highest level within the Premiership and in Europe.” Why not? After all, Lerner had experience operating a sports franchise. He ran the NFL’s Cleveland Browns starting in 2002 when his father died and sold the team 10 years later.

Owning an NFL team must have looked easy compared to what Lerner endured as an American with a majority stake in a Premier League club. Lerner himself sounded like a defeated man at the end of the 2013-14 season when he said: “I have come to know well that fates are fickle in the business of English football. And I feel that I have pushed mine well past the limit. The last several seasons have been week in, week out battles.” He put the team up for sale that spring, but there were no takers. A headline in The Guardian from May 2014 summed it up best: “Randy Lerner to sell Aston Villa with the club still on the road to nowhere.”

Owning and operating a baseball or NFL franchise is vastly different from what it takes to run a European club. Soccer’s transfer market is global and much more competitive and complicated than dealing with an American salary cap and draft picks. English fans, meanwhile, are a lot more demanding. In Europe, the home team intertwines with the city’s culture and traditions in a way more akin to college sports in the United States than the pros. Would an American understand and preserve a club’s traditions? Will they hire the right people? What do they know about the game, anyway?

During Lerner’s tenure, the team struggled in the middle of the table – after finishing sixth three straight seasons starting in 2007-08 – before dropping this year. It wasn’t for a lack of money. Lerner spent lots of it when trying to fix the problem, but did make many flawed decisions along the way. A series of bad coaching appointments and the lack of a technical director who could implement a transfer strategy inevitably hurt the team on the field.

Manchester United, perhaps the biggest name in the English game when it comes to sports properties, has also struggled as of late. The fans did not welcome Malcolm Glazer’s arrival at Old Trafford in 2005. Considered one of the world’s most successful – and above all valuable – soccer clubs, Manchester United has not been able to dominate domestically or in Europe over the past three seasons. The club hit bottom in 2013-14 when it finished seventh in its first season post-Sir Alex Ferguson. His replacement, David Moyes, lost his job for failing to get the team a spot in Europe. The team remains a work-in-progress under manager Louis van Gaal.

Arsenal has been in even worse shape. Stan Kroenke, who owns a majority share of the club since 2007, has also not helped bring any silverware to North London. The club has not won the Premier League since 2004 and was in position earlier this season to grab the title before Leicester City was able to complete its improbable Cinderella run. The question now is whether coach Arsene Wenger needs to go so that some real change can take place. The fans think so, calling on Wenger to resign several times over the past few months.

Liverpool has also had mixed results. By his own admission, John Henry said in 2011 that he knew “virtually nothing” about English soccer when his Fenway Sports Group acquired Liverpool. In an article published in The Guardian, David Conn wrote: “That (comment) drilled home how extraordinary it is that American businessmen, from the singular huge country with its own sports, still largely oblivious to football, have bought five of English football’s greatest clubs, Manchester United, Liverpool (twice), Arsenal, Aston Villa and Sunderland.”

Fast forward to today. Liverpool can salvage its season if it can win the Europa League. Manchester United can salvage theirs if they can get into 4th-place and the final Champions League spot this week. Sunderland is in a relegation battle. Sunderland will need a massive rebuilding – and an infusion of cash from owner Ellis Short –to be competitive next season. What this shows for any interested and deep-pocketed American questioning whether to add a European club to their sports portfolio is that it really is different over there. That’s something worth considering in a league that offers hardly any of the financial controls of American pro sports with more pressure to spend money with no guarantee of a return.