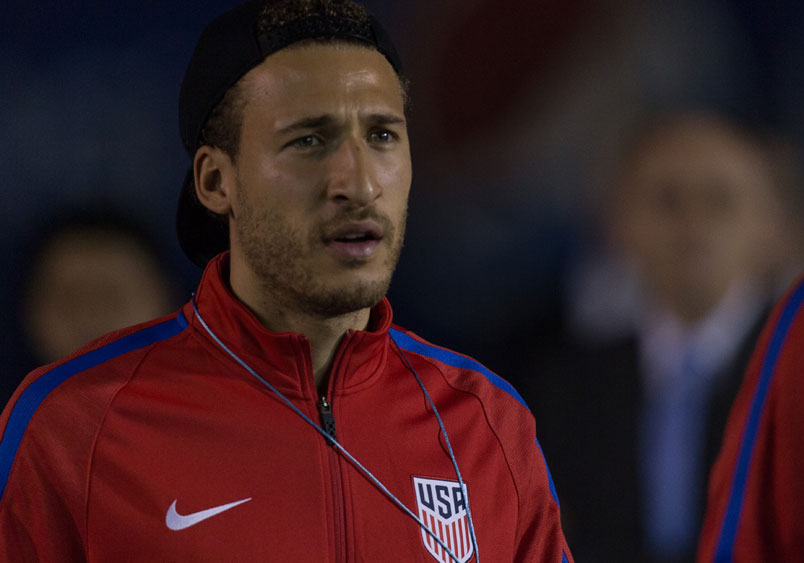 By Charles Boehm – WASHINGTON, DC (May 26, 2016) US Soccer Players – It’s alright to admit it. The US National Team’s 1-0 win over Ecuador on Wednesday night probably didn’t overly impress anybody. The occasion fit firmly into the norm for a pre-tournament warm-up friendly. By nature, they’re modest appetizers just before smorgasbords like the one that awaits in the Copa American Centenario next month.

We can still learn something from these kind of matches, and this one was no exception. With the Copa opener against Colombia barely a week away, here’s a rundown of a few pressing matters that became clearer at Toyota Stadium.

This is something most of us already knew. Remember Dempsey’s selfless, hard-working but ultimately frustrating duty in place of the injured Jozy Altidore at the 2014 World Cup.

Dempsey himself said as much in the lead-up to Wednesday’s game: “In the World Cup [Altidore] went down, I kind of played more of a target role, which is not necessarily my main strength. I like to be like the withdrawn forward and get on the half-turn and stuff like that.”

Jurgen Klinsmann seems to believe otherwise. He once again started “Deuce” at the top of a 4-3-3 formation against Ecuador. The veteran goal scorer is a clever pro who can fill multiple roles on the field, to be sure. However, he seems to do his best work ghosting in between the lines, luring defenders out of position, and seeking out combinations with teammates. It was no surprise that the entire attack developed more coherence once Bobby Wood, a true target man, subbed on.

Darlington Nagbe is ready to carry the load

The evening’s brightest star was probably Nagbe, who sparked the team as a halftime substitute. Not only did he score the game winner and chalk up a perfect 33-for-33 completion mark with razor-sharp passing, he seemed to make everyone around him better. The trusted veteran midfield trio of Jermaine Jones, Michael Bradley, and Kyle Beckerman have more than shown their quality over the years. Yet, Nagbe’s effectiveness in an attacking mid role may have given Klinsmann plenty to chew on over the next week.

For all his talk of proactivity and innovation, Klinsmann remains stubbornly conservative in several respects. That includes his usual insistence on a lengthy trial period for USMNT newcomers. In Frisco, he once again sounded cautious to a fault in his postgame remarks.

“Darlington understands the moment in time. He knows that he has to push the envelope. But now you want to also tell him, listen, you’ve got to make an impression, you’ve got to learn,” Klinsmann said. “We talked about [how] you have to play both ways, you’ve got to grind it out defensively, you’ve got to go into one-against-ones and win balls … He has tremendous talent with the ball at his feet going forward, that’s what we enjoy in MLS every weekend. But now the international side is both ways. And that’s what we’re working on, and he’s getting better and better doing that.”

Hopefully, the substantial tools Nagbe brings to the table will take precedence over some perceived pecking order. Nagbe doesn’t need to “pay his dues” before being considered for a major role. The same may prove true for 17-year-old Christian Pulisic as well.

What’s the center back solution?

Geoff Cameron has been a steady USMNT starter for quite some time now, whether at center back, right back, or even defensive midfield. He should play a major part in the Copa. Given DeAndre Yedlin’s improvement in the fullback role, Cameron appears destined for central work this summer.

Yet he sat this one out, just as he did Sunday’s friendly at Puerto Rico, due to a healing hamstring. It’s understandable when the coaching staff plays it safe with even minor injury concerns at this point. That said, the longer Cameron isn’t participating in full speed activities, the more nervous USMNT fans will get. It would be uncharacteristic for Klinsmann to start him against Colombia if he misses out on all three of this month’s warm-up games.

Steve Birnbaum and John Brooks both showed positive moments on Wednesday. Birnbaum with some eye-catching long passing and Brooks with some composed recovery defending in his own penalty box. The duo have a modest 25 combined caps, however, not logging a great many minutes together.

These decisions will almost certainly have a knock-on effect, too. Klinsmann may find it hard to resist his recurring habit of packing the midfield with defensive-minded players if he considers the center-back situation to be anything less than optimal.

Is fullback fair to Fabian?

Fabian Johnson has shown his value for Borussia Moenchengladbach as an attack-minded left winger this season. For better or worse, Klinsmann appears determined to utilize his versatility with a left back tasking right now, though.

He’s no slouch at that spot. He’s played it plenty in US colors. Johnson at fullback lets Klinsmann move other parts of his lineup around. Still, he didn’t appear entirely comfortable there on Wednesday. It simply may not be a platform that maximizes his many gifts. On the bright side, he did go the full 90 after carrying a groin injury into camp.

Again, it’s a case of one lineup selection affecting another. “FabJo” the fullback could benefit from striking up some chemistry with his colleague on the left side of midfield. The teenage sensation Pulisic came off the bench to make a forceful case for that spot, though Nagbe, Alejandro Bedoya, and Gyasi Zardes are also in the mix.

That last bit is worth remembering for Saturday’s friendly vs Bolivia in Kansas City (8pm ET – Fox Sports 1). These matches are an important time for experimentation and consideration. Klinsmann only has so long to tinker before making some choices and giving his first-choice unit some time to gel. The clock is ticking.