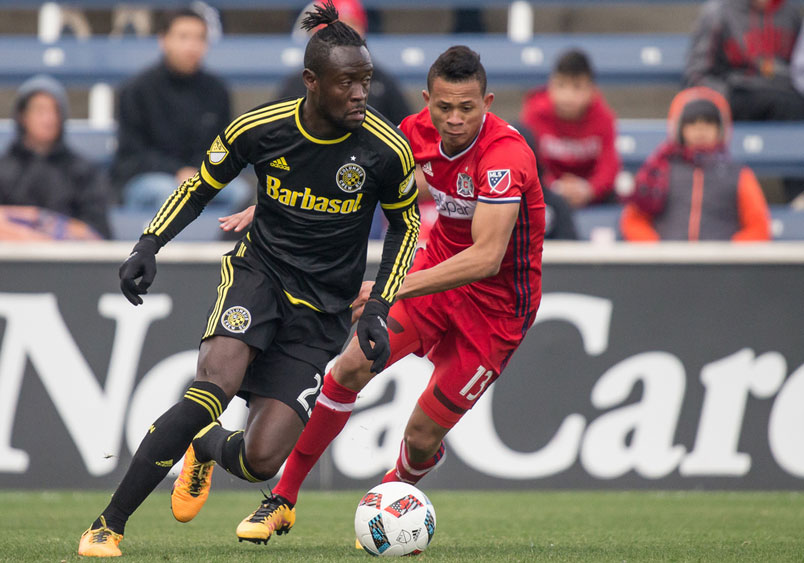 By Charles Boehm – WASHINGTON, DC (May 12, 2016) US Soccer Players – From its conception, Major League Soccer has always revolved around levers of control. A single-entity structure limits and disperses risk for investors. A severe salary cap keeps a tight lid on their player costs. On the field, there’s the constant tweaking of competitive balance via an overly generous playoff format and a convoluted rulebook that promotes parity above all.

So perhaps no one should’ve been surprised this week when one of the league’s most lovable eccentrics talked out of turn. The Crew chose to swiftly mow him down like one of the countless blades of sports turf on his former team’s lush natural playing surface.

Less than five days after an in-game quarrel with his teammate Federico Higuain over who would take a penalty kick vs the Montreal Impact, Columbus Crew SC’s star striker Kei Kamara is now a member of a different team, shipped out of the town that had celebrated his heroics in a run to the MLS Cup final just months before.

In a trade announced at 10:26am ET Thursday morning – but which we’re led to believe was completed before the close of the league’s primary transfer window at 1am ET – Kamara was exiled to New England in exchange for a fat stack of allocation money, draft picks, and sundry other uniquely MLS assets.

The breakdown in Crew SC’s chemistry and unity was obvious, and costly, as a side already struggling for form squandered a 4-1 lead after the PK in a wild affair that ended 4-4 at their MAPFRE Stadium home. But Kamara was the only one disciplined, at least in public. His outspoken criticism of his Argentine teammate in post game comments to the media meant a one-game, club-imposed suspension followed closely by his permanent exit.

Kamara did what the league practically has to beg players and coaches to do. He faced the cameras and microphones and spoke frankly despite the heat and emotion of the moment. Yet for many observers, he broke a cardinal rule about “airing dirty laundry” by expressing his frustrations in the public domain.

To be sure, many current and former pros would echo this sentiment. Columbus coach Gregg Berhalter made clear that he and the club viewed this as the most serious transgression of the whole tableau. It’s not a difficult point to score, given Kamara’s general reputation as a “high-maintenance” player and one about to begin life at his seventh club in a decade-long professional career.

After the trade, Crew SC’s chairman and owner Anthony Precourt dropped a hint about pre-existing issues with Kamara, seemingly confirming the widely-mooted idea that he was a locker-room disruptor. The fact that Kamara and the club had just agreed on a lucrative new contract extension that elevated him to Designated-Player status earlier this year went unmentioned. So the familiar stereotype of the “problematic player” probably counts as conventional wisdom in this case. However, that looks like more of a reach when factoring in the full depth of Kamara’s personality.

We’re talking about the reigning MLS Humanitarian of the Year here, a FIFPro Merit Award winner who helps build schools in his native Sierra Leone, the land whose vicious civil war he narrowly escaped as a refugee adolescent before working his way to the American dream on these shores. He’s generally been embraced by fans wherever he’s gone, not only for his exploits on the field but his kindness and charisma off it. Even his dog, Chelsea, has more than 1,000 followers on Twitter.

The concept of “Kei the cancer” grows even stranger when you read Berhalter’s words about his linchpin striker in a Rolling Stone profile from last year:

The methodical coach Berhalter explains Kamara’s locker room presence as if describing an alien being: “Kei’s a fun-loving guy, a little bit free-spirited, and I think just overall brings a positive attitude to the group – [he’s] a little bit outside of your typical athlete; a little bit looser than most people, just really enjoying every day.”

I suspect that what really booked Kamara’s ejection from a Crew team in many ways built around him is the most dangerous commodity of all: Honesty. Kamara dared to speak as plainly to the public as he did to his teammates on the field.

Conversely, Higuain – whose dispatching of the contentious PK denied Kamara his first-ever MLS hat trick – ducked and denied media requests until his hand was forced on Thursday. Even then, he spoke only in vague generalities, calling the whole drama “not my problem” and refusing to explain why he insisted on taking the spot kick against Montreal.

The aforementioned conventional wisdom would have you believe that Higuain was the “classy” one, the “company man” in all this, and his club would seem to agree. But from a different angle, it’s hard to blame Kamara for facing up to the frustrations that were obviously festering in that locker room, while Higuain steadfastly declines to own up to the feelings that his actions clearly revealed on Saturday night.

As with whistleblowers in other walks of life, the decision-makers decided it was simplest to ship out the odd man out. The Crew’s problems didn’t start with Kamara’s postgame remarks; they trace back to the friction that prompted them. It’s hardly a safe bet that shipping out the most honest protagonist of this scene will fix them.