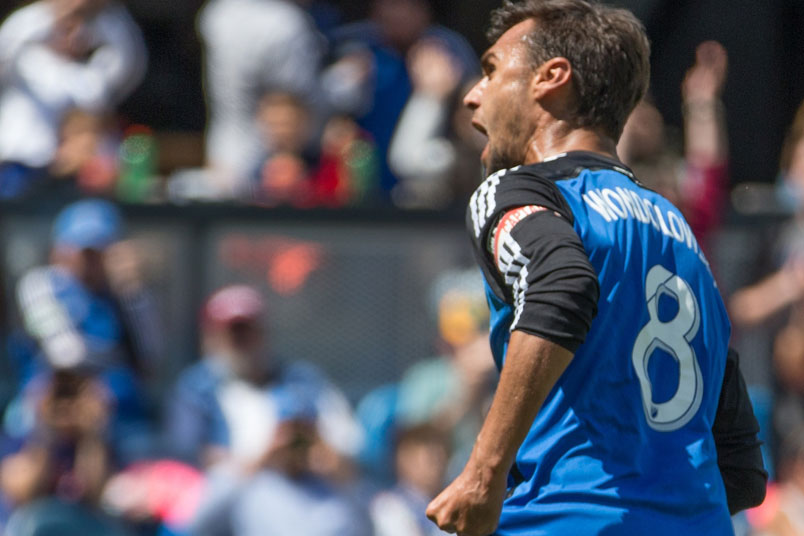 By Clemente Lisi – NEW YORK, NY (May 3, 2016) US Soccer Players – The MLS season is just a quarter of the way through, but there are already signs of what kind of year this is shaping up to be for some teams and players. While Major League Soccer is a marathon where a lot can and will change, a picture is slowly starting to form.

However, as most fans know, sometimes the only thing that one can predict is the unpredictable nature of the league. Take the New York Red Bulls this season. The team got off to a poor start. Scoring goals was a problem. A porous defense allowed too many goals on the other end, the recipe for a tough season. All of a sudden, the Red Bulls turned it around. They’ve won two games, including a resounding 4-0 victory at home Friday night against FC Dallas.

“I feel like we’re in a good place right now,” Red Bulls coach Jesse Marsch said. “Now that doesn’t mean anything because next week we’ve got to throw it all out there again and prove ourselves again. If we get too ahead of ourselves, all of a sudden you start to slip.”

Despite the big win, it’s unlikely the Red Bulls can repeat last year’s showing and win the Supporters’ Shield again in 2016. Here are three teams that have gotten things right this season and are my early contenders to take the 2016 Shield.

It’s not news that Wondo can be key for the Quakes. Already this season, he is back to his best form. He’s in a tie with the Portland Timbers’ Fanendo Adi at the top of the scoring table with seven goals in nine games. Two of Wondolowski’s goals were game winners. With the Quakes on four wins this season, that says all anybody needs to know about his importance. The team also never says die. This season, the Earthquakes have scored in the last 10 minutes of a game in four of its nine matches.

Individual greatness has contributed to team success for several clubs. For example, the Philadelphia Union is off to a great start thanks to CJ Sapong, who has four goals this season. At this rate, he is close to bettering his personal record of nine from 2015. Sapong has recorded one game-winning goal and helped the Union to four wins so far this season. This past Saturday, Sapong had two clear scoring chances against the Earthquakes, but was unable to put them away. The game ended 1-1.

Another strong performer has been newcomer Chris Pontius. The midfielder signed with the Union from DC United in the offseason. He already has four goals. That’s the most goals in a season for Pontius since 2012. He also wins duels and is 51-of-74 (68.9%) and is fifth-best in the league.

The Union, with a game in hand in the Eastern Conference and in second place behind the Montreal Impact, is averaging 1.63 points per game. That’s a very strong pace for a team easily overlooked in the preseason.

In the Western Conference, Real Salt Lake, also in second with a game in hand behind the Colorado Rapids, has an even better PPG with an impressive 2.13. While keeping that pace is very difficult in MLS, teams that finish high in the standings are able to amass high PPG. In 2015, both the Red Bulls and FC Dallas, winners of their respective conferences, both had averaged 1.76 by the time the regular season came to an end.

RSL has been strong both defensively and offensively. Goalkeeper Nick Rimando has been exceptional, while Joao Plata leads the team in goals with four (in addition to his four assists). RSL has scored 14 goals this season, meaning Plata has been part of nearly 60% of his team’s offensive output. Plata will need to maintain his form as the team embarks on five consecutive road games that will test this team.

“I think in our attack we always want to have offensive thoughts first. We don’t want to be playing backwards and sideways we want to be positive with our thoughts,” said RSL coach Jeff Cassar. “But, we are going to be gone (for five games).… At the beginning of the year we wanted to make Rio Tinto a fortress again and three points is what we are shooting for every time.”