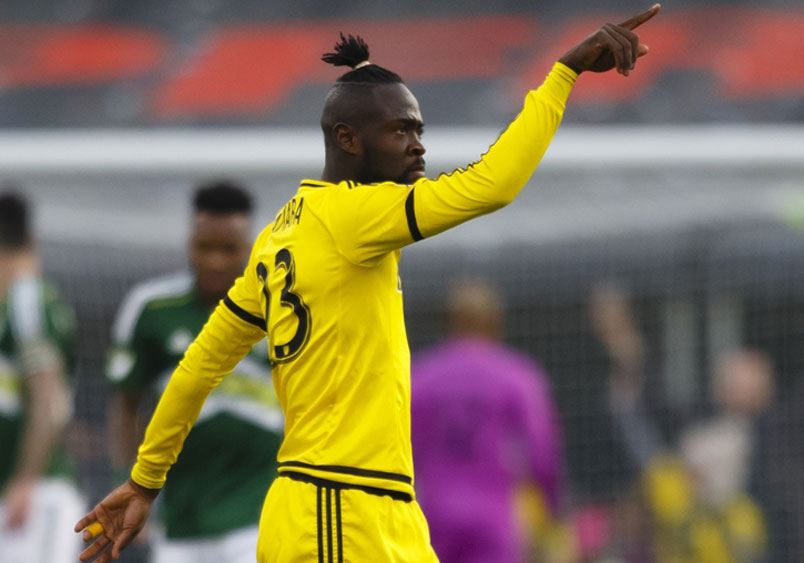 By Jason Davis – WASHINGTON, DC (May 11, 2016) US Soccer Players – Excuse me if I’m a little giddy. Things like what happened on Saturday don’t come around very often in Major League Soccer, and the opportunity to write on this particular subject is enough to cause the hair to stand up on the back of my neck. An honest-to-goodness controversy, created by the comments of one star player about one of his teammates, has erupted in 2016. It’s enough to make you wonder if MLS is actually starting to resemble a real life sports league.

The argument between Kei Kamara and Federico Higuain of Columbus Crew SC over who would take a penalty kick just after halftime was hardly notable. Players often argue over who will take a penalty. Perhaps the only remarkable thing about the moment was the involvement of Didier Drogba and the fact that Columbus held a 3-1 lead at the time. This wasn’t a penalty that would draw Crew SC level or give them the lead. This was a penalty that would add another insurance goal to what was, to that point, a very good day for Columbus in a season that hadn’t had nearly enough very good days.

What was notable, and what prompted the still-roiling controversy, was the honesty of Kamara while speaking to reporters after the match. The man who last year tied for the league lead in goals openly expressed frustration with Higuain, questioned the Argentine playmaker’s worthiness as a teammate, and pointed to a weak relationship between himself and the midfielder both on the field and off. It was an airing of dirty laundry the likes of which is rarely seen in MLS.

“I haven’t really had to depend on Pipa [Higuain] at all,” Kamara said. “How long have I been here? How many goals have I scored? How many have come from his assists? One, maybe two. I don’t depend on him. I depend on, I depend on my outside backs to pass me balls. I admire [Orlando City’s] Kaka and [Cyle] Larin connecting. I admire [Montreal’s Ignacio] Piatti and [Didier] Drogba connecting. How many times have me and [Higuain] connected? It hasn’t been [there]. But I haven’t had to worry about it because I’m scoring goals. But when it comes to something like [the penalty kick], I really have to get mad about it and I’m really upset.”

The last time we saw this sort of personality clash between stars, Landon Donovan was questioning David Beckham’s role as captain in his first year with the LA Galaxy. Kamara vs Higuain isn’t quite the same as Donovan vs Beckham, but it is a big deal. These are two of the leading figures on the defending Eastern Conference champion, a team picked by many (including myself) to go all the way in 2016. A crack of this size in the facade of Crew SC is not only fascinating, it’s potentially debilitating if not correctly handled.

Head coach Gregg Berhalter’s chosen tack was to suspend Kamara for Saturday’s game against the Rapids. Speaking out against a teammate in public is apparently something Berhalter won’t stand for, though it’s worth wondering why the situation reached the boiling point publicly in the first place. At the very least, there should be no question of who is going to take a penalty, regardless of the circumstances.

Word of Kamara’s suspension didn’t hit the wires until after Sports Illustrated’s Grant Wahl reported that Crew SC was actively looking to trade their star striker. A preseason MLS Cup contender, suffering through a rough start but far from out of the running for a chance at a title, trading their leading goal scorer because of a few words said in the heat of the moment? It sounds like madness.

There’s also the small problem of the market for a Designated Player being limited. You can count the number of teams with an open DP slot on one hand. Any team that can do a deal for Kamara will probably be offloading a malcontent/underachiever on Crew SC.

Kamara, for his part, hit Twitter to assure fans that it was “just a rumor.” At least on social media, Kamara acted as though nothing was wrong.

Still, Kamara was none too happy about the suspension and didn’t hold back when asked about the punishment handed down by Berhalter. Instead of the issue being quietly handled internally and then going away, there’s a real chance the story carries over into yet another week of a season already dealing helpings of misfortune to Columbus.

“(Berhalter) told me that this morning, and obviously I didn’t agree to it all,” Kamara said. “I won’t agree to it. But he’s the boss, and if he says, ‘We don’t need you for the weekend. You’re going to have to sit out for the weekend,’ there’s nothing I can do about that.”

For Columbus, the situation presents a significant problem the team must overcome. Berhalter’s approach and ability to smooth out hurt feelings will set the stage for the rest of the season, barring a shocking trade.

For the rest of us, Kamara vs Higuain – or rather “Kamara speaks his mind” – is a welcome bit of drama that adds to the unfolding story of the season. The narrative questions write themselves: Will the rift knock the Crew off track? Will Kamara be part of a blockbuster trade because of his comments? Are the size of MLS egos making it harder than ever for coaches to keep the peace?

Whatever the outcome, it’s certainly worth watching. That’s something that hasn’t necessarily been true for a lot of what we’ve seen so far this season.