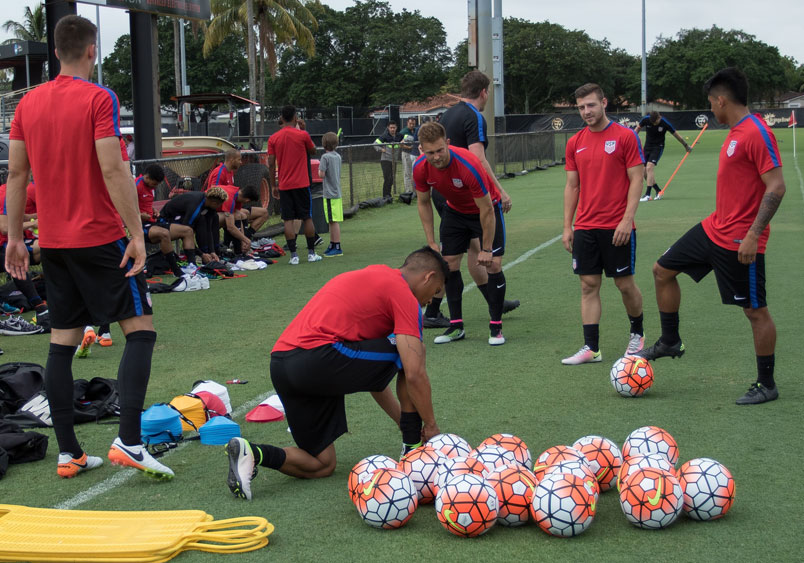 By Charles Boehm – WASHINGTON, DC (May 19, 2016) US Soccer Players – Is it better to get a National Team camp call and then sent home, or never get that call at all?

That’s one way to phrase the relatively rare situation unfolding in Miami Shores this week. USMNT coach Jurgen Klinsmann’s ramp-up towards the Copa Centenario starts with a training camp staffed by a hybrid roster of foreign-based players whose club seasons have just ended.

Klinsmann wants as much time with his players as possible before this summer’s extravaganza, of course. That won’t include MLS players for now. Their release window doesn’t open until after this weekend’s league matches. A few of the USMNT’s overseas options are also still on club duty, with their teams in playoff and cup action.

15 of the 22 called in for this “transition camp” are on the 40-man preliminary Copa America roster. The other seven are youngish or lesser known faces getting a chance to get more familiar with the USMNT setup and vice versa. It’s an intriguing dynamic for both groups.

Some of the 15 Copa-eligible players are close to locks for the final roster. Klinsmann makes that official when his choices become public during Fox’s MLS broadcast on Saturday. They’ve gotten a useful jump on their tournament preparations. For those on the bubble, a week of workouts under the hot Florida sun – one USSF official referred to the transition camp as “a light week,” but that’s a highly subjective term in the Klinsmann era – is a de facto final audition for a Copa invite.

Sure, the coaching staff may already have most, or all, of their tournament roster already in mind. However, there’s nothing quite like getting “face time” in front of the bosses just before they officially file their final decisions.

US Soccer history has several examples of players who were long shots for major tournaments only to become key contributors. Think of Ben Olsen in 2006 or Kyle Beckerman in 2014. Pablo Mastroeni, the only member of the 2002 World Cup squad who didn’t play a minute in qualifying but ended up a starter, might be Exhibit A.

“I didn’t feel like I had any pressure on me to perform,” Mastroeni told USA Today in May 2002. He’d gotten married the previous October and at age 25, had little in the way of international expectations. “If I didn’t make the World Cup roster, I’d be spending some quality time with my new wife at my new house in Colorado.”

Mastroeni would go on to start three of the USMNT’s five matches during the World Cup run.

Goalkeeper Zack Steffen, midfielders Emerson Hyndman and Caleb Stanko, and forwards Paul Arriola, Julian Green, Fabrice Picault and Amando Moreno are the other seven in camp this week. They already know they’ll be Centenario spectators just like the rest of us, a scenario that might otherwise set a scene of tantalizing frustration. Yet here it may prove liberating, as they can throw themselves into the opportunity without the pressure those aforementioned guys “on the bubble” may carry.

These seven may also represent the most compelling aspect of Sunday’s friendly at Puerto Rico. That game that should be fairly one-sided in terms of the score. What it could do is offer a glimpse of the USMNT’s future. All seven bring varied skillsets to the table. All are navigating the complex path of Americans abroad, a favorite topic of Klinsmann’s.

Steffen, Hyndman, Green, and Arriola are U-23s who took part in the ultimately unsuccessful Olympic qualifying campaign. They might gain a bit of extra guidance and attention, given Klinsmann’s past observation about the “lost generation” that suffered a long hangover after their failed 2012 Olympic bid.

Given the team’s topsy-turvy form of the past year-plus, most honest observers – including this one – would admit that they have little to no idea of just what to expect from the USMNT at Copa America. Still, one of the benefits of such a big event is that it infuses every moment of team activities with added significance. Even a week like this, which might otherwise turn into a throwaway exercise.

It doesn’t start on Sunday when the USMNT takes the field. It started when players went directly from their league seasons to international duty. The spotlight is already on, and it only gets hotter.