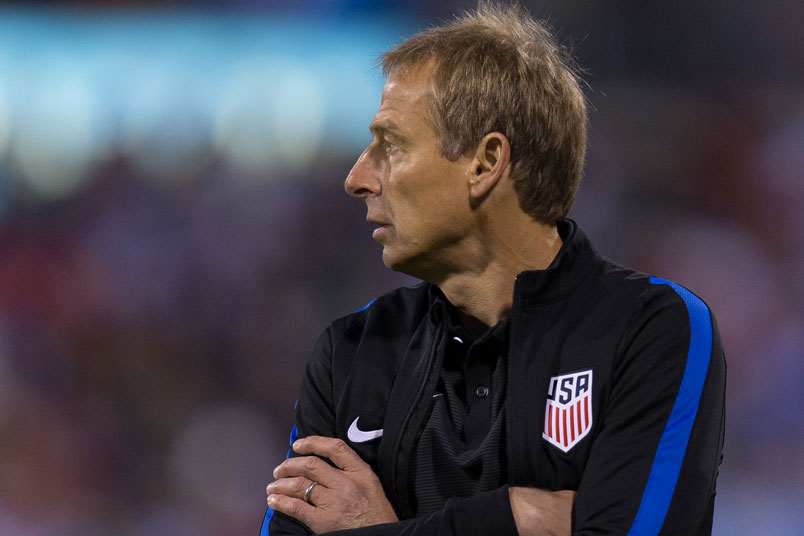 By Charles Boehm – WASHINGTON, DC (May 5, 2016) US Soccer Players – US Soccer released the 40-man preliminary Copa America Centenario roster with fanfare last weekend. It’s only the first formal step of the multi-layered process by which coach Jurgen Klinsmann will whittle down his player pool to a tournament squad of 23, and from there to his starting 11 vs Colombia on June 3, the opening match of one of the biggest events (behind only the 2014 and 2018 World Cups) of his roller-coaster tenure.

Just what kind of decisions do Klinsmann and his staff have to make between now and then? Here’s a position-by-position breakdown.

How many make the cut? Probably three

Tim Howard and Brad Guzan remain the USA’s top two, despite a time of transition for both players. Howard moves stateside to join the Colorado Rapids this summer. Guzan and Aston Villa face a murky post-relegation future.

Beyond the rather large question of which of them will start come Copa time, the USMNT brain trust must decide who joins up next month as the #3. At age 20, Horvath is “one for the future”. Bingham is the trending newcomer after a solid start to his international career in the January camp and Rimando is the trusted veteran. All three play for clubs on a spring-fall season, but both MLS and the Norwegian Tippeligaen are shutting down for part or all of June’s international activities.

How many make the cut? Probably eight

Here’s where it starts to get tricky. Klinsmann’s most recent competitive roster, the group of 28 named for World Cup qualifiers earlier this year, featured nine players listed as defenders, plus Fabian Johnson, who’s logged plenty of time at both fullback slots. So the list of 15 above will probably end up somewhere between seven and nine players.

That probably breaks down into four center backs and four outside backs. Klinsmann’s well-established love of versatility likely means that guys who can also do a job in midfield – think Yedlin, Cameron, Evans… and Acosta, who’s truly a holding/box-to-box mid by nature – will be commodities. The fact that the US coaches passed entirely on standout Americans getting regular high-level minutes like Jorge Villafana, probably because they haven’t spent as much time in recent camps and are thus less familiar, may work against the likes of Lichaj and Chandler.

How many make the cut? Probably eight

As with the back line, nine of the 28 most recently called were midfielders. Though again, at least three of the defenders and forwards on that list are also midfielders are can play the position if needed. Here, another common theme of the Klinsmann era returns: An abiding love of defensive mids. A whopping six of the above are #6s, even if Jones, Bradley and perhaps Morales feel just as comfortable ranging more freely around the center of the park.

This sets the scene for a head-turning snub or two when final rosters are due on May 20. If Klinsmann learned his lesson from previous years where he shoehorned as many as three d-mids into one starting XI (with dubious results), he’ll make some tough cuts in his favorite position in order to augment the USMNT’s wide and attacking-minded options.

Conservative at heart, the boss has generally held just one place for a true attacking midfielder – and sometimes none at all. Given the daunting opposition awaiting in the Copa, this column expects Klinsmann’s caution to show itself yet again, which could spell bad news for playmakers like Nguyen and Diskerud. As previously mentioned, versatility is valued here, which suits Nagbe and Bedoya.

How many make the cut? Probably four

The axe may swing the hardest at the top of the spear, where previous ratios suggest that only five of the above, and quite possibly just four, will punch their tickets this summer. Pulisic is really a midfielder, while Zardes can roam up top or out wide, and both have been in solid form lately. Altidore and Dempsey are fundamental, though both will have to stay healthy over the next few weeks of MLS play for that to hold true again.

Considering his red-hot form in Germany as well as the costs the US incurred by failing to take a suitable backup to Altidore at Brazil 2014, Bobby Wood’s chances look solid. Wondo keeps scoring for the San Jose Earthquakes but might well wind up in direct competition with Seattle’s Morris – who has gained momentum after a stumbling start to his pro career – for one of the final spots.

Finally, an out-and-out, vertically-minded winger like Finlay seems like a useful tool in an area of real need for the Yanks. Yet it’s hard to tell whether Klinsmann sees such players as luxuries – he’s seemingly used Yedlin as a winger more often than he’s used actual wingers – or has already decided that Finlay is the one he’ll take.

Much of Klinsmann’s decision-making will hinge on events at club level over the next three weeks, of course. And he’ll have a few days in camp in Miami with most of his foreign-based contingent before having to make his final calls.

Arithmetic is arithmetic. There are simply not enough slots for all the players who might be able to make a difference in the Copa. That all adds up to an opportune time for the coach/technical director to justify his sweeping powers and multi-million-dollar salary with some savvy selections.