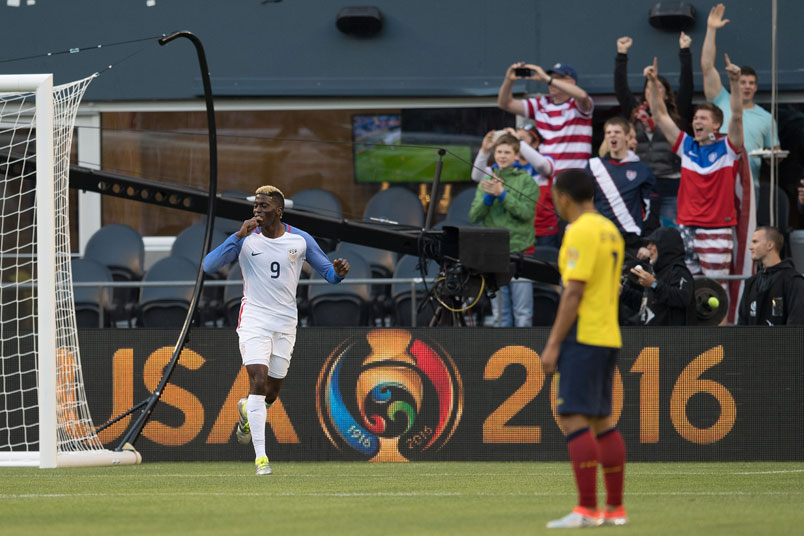 By Clemente Lisi – HOUSTON, TX (Jun 20, 2016) US Soccer Players – The USMNT will be without several key players on Tuesday night when it takes on Argentina in the semifinals of the Copa America Centenario. As US coach Jurgen Klinsmann tries to figure out how best to replace Jermaine Jones (red card) and Alejandro Bedoya and Bobby Wood (both yellow card accumulation) he will have to rely on a player like Gyasi Zardes.

What often goes unnoticed about Klinsmann’s team has been the role of young players in getting the USA this far into the tournament. While it seems that the National Team often leans on veterans – Clint Dempsey as the obvious and ever present example – a player like Zardes is not only playing in his first major international tournament, but also getting progressively better with each game.

“I’m looking forward to taking on our next opponent,” said Zardes, who scored the game-winning goal in the USA’s 2-1 quarterfinal victory against Ecuador.

The Los Angeles Galaxy striker is the type of player Klinsmann is hoping to mold into a future star. At this Copa Centenario, the 24-year-old – easy to spot during games because he dyes the top of his hair blond – has been a regular on the right flank, starting all four games. It’s a further demonstration into Klinsmann’s commitment to the budding star. Although he needs to work on his first touch, Zardes’ tremendous work rate and passing abilities have helped bolster the US attack in recent weeks. He’s resourceful in the penalty box and often a goal poacher in front of the opponent’s net. Zardes’s perfectly placed ball allowed Dempsey to score the winning goal versus Paraguay to take top spot in Group A.

Zardes’s National Team success should not come as a total surprise. American soccer, after grappling for years with an inconsistent philosophy when it came to developing talent, may have finally figured out a way. In 1998, US Soccer launched Project 2010, an initiative tasked with developing youth players with the aim of trying to win the World Cup by 2010. Over the span of those 12 years, Project 2010 (later rebranded Generation Adidas) produced a small group of players, but not enough of them to get the USA anywhere closer to winning a World Cup.

Major League Soccer took the lead in trying to develop players in 2008 by instituting the Homegrown Player Rule. The program allows teams to sign local players from their own development academy directly to a team’s roster. Prior to that, an MLS team could only sign such a player through the SuperDraft or have one assigned to them through the League’s arcane allocation process. The rule moved player development from league level to individual teams. Two years ago, defender DeAndre Yedlin, who at the time played with Seattle Sounders FC, became the first Homegrown Player to make an appearance at a World Cup. Yedlin’s performance in Brazil drew the attention of European clubs and he eventually landed at Tottenham.

At the same time, teams like FC Dallas and New York Red Bulls have heavily committed to youth players by signing them from their academies. FC Dallas signed 13 Homegrown Players in 2015 and started an MLS-record five in a game last September. The Red Bulls signed seven Homegrown Players over the course of a few days last December. Defender Matt Miazga, who signed with Chelsea during this past season, began his pro career as a Homegrown Player in 2013. In addition, 11 MLS teams now have USL affiliates and continue to juggle the need for foreign stars (to bring in fans and raise TV ratings) against the mission of developing future American stars. While many of these players struggle to get playing time in MLS, the hope now is that the USA can do better through this expanded talent pool.

“US youth teams haven’t had the best results in the past few major tournaments,” said Beau Dure, author of the book “Long-Range Goals: The Success Story of Major League Soccer,” referring to the recent failure to qualify for the upcoming Summer Olympics in Brazil. “But the player pool might be deeper than it was in the past.”

Bruce Murray, a former National Team striker who played in a similar position to Zardes at the 1993 Copa America, said Zardes is the real deal. He said the United States has a great shot at reaching Sunday’s championship game.

“I think Zardes has an instinct for the goal and he gets himself into good spots,” he said. “Can Klinsmann win without the MLS players? The answer, of course, is no.”

Zardes currently epitomizes everything that’s right with the Homegrown Player Rule. Zardes grew up in California, not far from his future home at StubHub Center, on a steady diet of English Premier League and Liga MX matches. Zardes said he’s tried to model his game after Ronaldinho and has watched old videos of what the former Brazil star did during his Barcelona days. But Zardes is creating highlight reels of his own as of late, using the Copa Centenario as the perfect setting to get international experience and face tough opponents in a tournament setting. This is exactly what Klinsmann is repeatedly referring to when he says his players need to experience big games and win them.

“I’m really looking forward to growing more and learning more as a player,” he said following the USA’s win against Paraguay earlier this month.

Many feared on the eve of this tournament that the USMNT would be out of attacking options, especially with the absence of the injured Jozy Altidore. With Seattle Sounders FC rookie Jordan Morris left off the roster and budding star Christian Pulisic riding the bench, Zardes has been the young star Klinsmann has bet on at this tournament. Last year, Zardes earned 19 caps, tying Claudio Reyna’s record set in 1994 for most appearances by a player in a debut year with the U.S. National Team. This year, he’s become an integral part of Klinsmann’s side.

Zardes said the experiences of the past few weeks – and the unique nature of the USA hosting and participating in the Copa Centenario – will serve him well going forward. He will also need to have one of the biggest games of his career Tuesday if the United States hopes to knock out of a Lionel Messi-led team that’s ranked No. 1 in the world and many had predicted could win this tournament.

“The key at this tournament was to succeed and move ahead,” he said. “It’s a huge milestone in my career.”