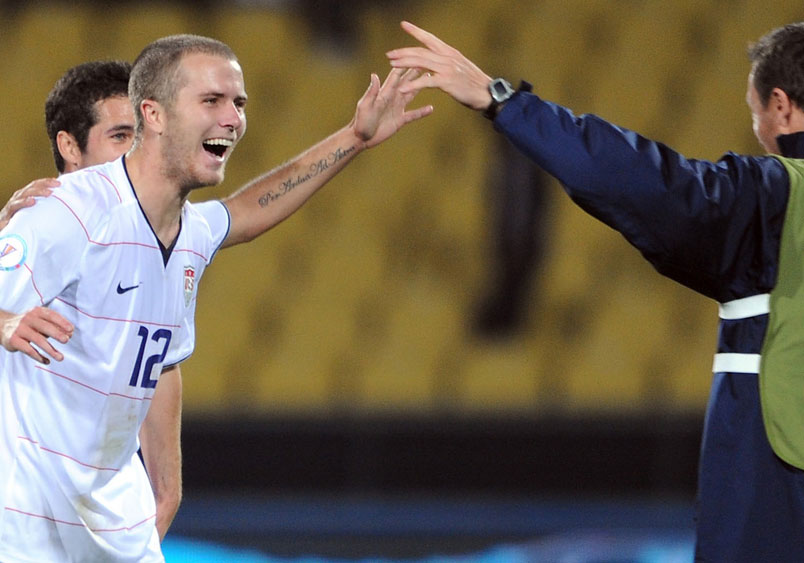 By Charles Boehm – WASHINGTON, DC (Jun 7, 2016) US Soccer Players – In the run-up to Friday’s Copa America opener vs Colombia, USMNT coach Jurgen Klinsmann emphasized that his team would “need a good result in the first game.” He went onto boldly set the scene, saying “we start the tournament with a final.”

Perhaps the USMNT boss has had to adapt his motivational tactics a bit. The 2-0 loss in Santa Clara, California might pose a shattering setback if he and his players had in fact truly internalized the all-or-nothing approach that a cup final demands.

There’s really no need to panic. There’s ample history of teams overcoming a loss in their opening match of a major tournament and finding success with a deep run into the knockout rounds.

Six years ago, Spain was the best team on the globe heading into the 2010 World Cup. Their “tiki-taka” possession game already won a European Championship. They duly carried outsized expectations to South Africa. Then they lost 1-0 to Switzerland in their first match. Despite dominating the underdogs in terms of possession and chance creation, La Furia Roja were undone by one of the scrappiest goals you’ll ever see, as well as an all-world day for goalkeeper Diego Benaglio.

“Spain may be sublime on the ball,” wrote the Guardian’s Daniel Taylor from Moses Mabhida Stadium in Durban, “yet the lesson handed out by a limited but ultimately jubilant Swiss side is that there is no use out-passing, outmaneuvering and outclassing opponents without outscoring them.”

The Spaniards would internalize the lessons of that day, cranking down the hatches in back and winning a sequence of tense matches en route to their first world title. With their unforgettable midfield asphyxiating the opposition via endless passes, they did not concede a single goal in four knockout-round games.

Spain ’10 was the first and only team to win the World Cup after losing their first match. Italy reached the final of USA ’94 – a breathless, goalless draw eventually claimed by Brazil in a penalty-kick shootout – after opening with a loss to Ireland. Four years prior, Argentina pulled off a similar recovery from a stunning 1-0 upset by Cameroon, grinding their way to the tournament final vs West Germany.

At Euro 2008, Turkey surprised observers by roaring back from a 2-0 defeat at Portugal’s hands on opening day, kick starting their attack in two straight wins over Switzerland and the Czech Republic. Turkey would surge into the semifinals, where they gave Germany all they could handle in a 3-2 slugfest only decided by Philipp Lahm’s 90th-minute winner.

The above examples provide a reminder of the importance of resilience – a traditional American strength – and persistence amid the vagaries of the tournament environment. The current USMNT should take even more inspiration from a much more familiar example: Their own program’s amazing resurrection at the 2009 Confederations Cup in South Africa.

Those Yanks were widely written off after a 3-1 loss to Italy and a comprehensive 3-0 beating by Brazil. Both those defeats featured straight red cards, the first to Ricardo Clark and the next to his replacement in central midfield, Sacha Kljestan. Amazingly, other results meant that Bob Bradley’s side could still advance. Facing Egypt wasn’t an easy assignment with the Pharoahs’ upset of Italy and impressive display in a wild 4-3 loss to Brazil.

The USMNT would need to win by at least three goals in Rustenburg, and hope that Brazil – whose semifinals berth was already booked – somehow beat reigning world champions Italy by the same or greater margin back in Pretoria.

Charlie Davies gave the US an early lead and Brazil raced out to a 3-0 first-half lead (per usual, the matches were played simultaneously). Michael Bradley combined with Landon Donovan to double the USMNT’s advantage in the 63rd minute. Eight minutes later, Clint Dempsey connected on a deep cross from Jonathan Spector, and what had looked like a hopeless long shot was suddenly real. The USMNT booked tickets to a semifinal showdown with mighty Spain.

The Yanks would shock the world with a 2-0 win in that one, of course, ending the European champions’ 35-game unbeaten run and setting up a rematch with Brazil. A delirious start to the final saw the US take a 2-0 lead, only to be reeled in and defeated 3-2 by the relentless South Americans.

In the end and on paper, that African adventure featured more losses than wins. Few at home felt anything but pride and praise as their battling mentality opened up a new sense of possibility for the program and its players. It’s a lesson that ’09 participants Dempsey, Michael Bradley, Jozy Altidore, Tim Howard, and Brad Guzan may well remind their current teammates of as they face off against Costa Rica in a near-must-win in Chicago on Tuesday night.