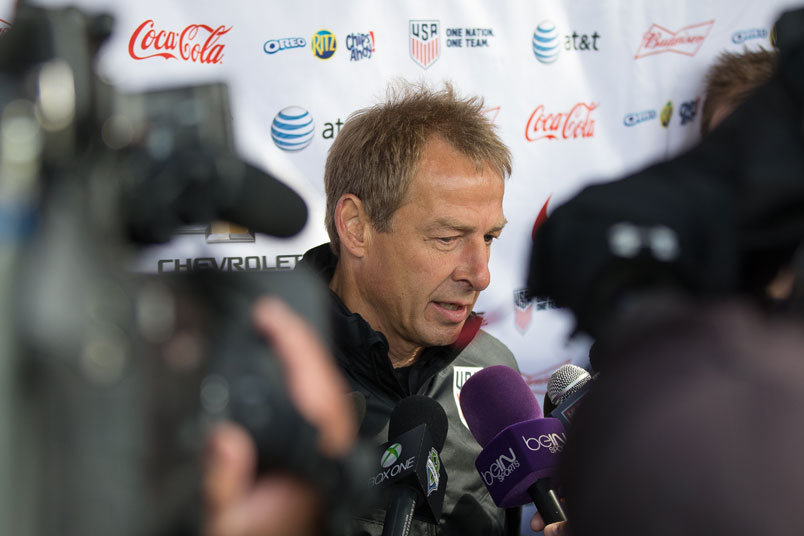 By Charles Boehm – WASHINGTON, DC (Jun 15, 2016) US Soccer Players – The USMNT met and even surpassed the expectations of many observers by finishing tops in Copa America Centenario’s Group A, with a 2-1 record against quality competition. Albeit with a substantial helping hand from Costa Rica via their unexpected win over Colombia. Yet in many ways, their tournament is only just beginning.

It’s now been well over a decade since the USMNT made their run to the quarterfinals of the 2002 World Cup. That effectively set the bar for what the program and its supporters consider possible and realistic on the world stage. The team has booked advancement out of the group stage in two of the three World Cups since then. So even if knockout-round victories remain few and far between – as they are for all but the global elite – it’s with good reason that US Soccer leaders and fans alike consider “getting out of the group” to be a reasonable goal in major tournaments.

Though you wouldn’t necessarily know it by some of his rather misleading public pronouncements after Brazil 2014, Jurgen Klinsmann isn’t here merely to teach the USMNT how to survive the first hurdle at events like this. He got the job to spearhead the push for a “new normal.” He’s here to guide the US to permanent residency at that most ephemeral, elusive, and increasingly overused position: “the next level.”

That means reaching the knockouts in these situations, and at the very least, keeping pace upon arrival.

“We’ve qualified now for everything since ’90. Three out of the last four [World Cups], we’ve been in the second round,” US Soccer president Sunil Gulati said in a roundtable with several reporters last week. “But we haven’t broken through and matched up well against the world’s elite.”

Klinsmann’s tenure has been a hard slog in this respect, and for a number of reasons. Not least of them is that the inherent randomness and tiny sample size of these occasions admittedly make objective judgment a treacherous task. Depending on whether you include the Gold Cup – where the USMNT carries vastly different expectations – Thursday’s Copa quarterfinal vs. Ecuador is either just the second major knockout match in Klinsmann’s time in charge, or the seventh. (Here cynics might point out that March’s home World Cup qualifier vs. Guatemala was another such “win or go home” moment that simply arrived a few years prematurely.)

Then you have the myriad factors that affect any nation’s prospects of success in the rarified air of a major tournament’s elimination rounds: Matchups, form, talent pool, referee’s decisions, sheer luck and much more. As Gulati and others have pointed out, it’s risky to gauge the big-picture status of an entire program by one 90-minute span of play, or even two or three of them.

But this is the essence of life in the pressure cooker that the US have for so many years sought to inhabit. Klinsmann’s results in occasions of this caliber are one of the biggest measuring points for the progress or stagnancy of his time in charge. Beat Ecuador, and this tournament – this entire year, really – will be a rousing success. Lose, and brace for months of the familiar denunciations, soul-searching, and critical postmortems.

So, the USMNT have been here before. The question, then, is how they plan to make this time different. Of course, it would be naive to expect Klinsmann or his players to divulge any tactical or personnel plans of substance at this stage. Even with that in mind, the words that have come out of the coach’s mouth this week have been worrisome for those with a healthy knowledge of his past history.

“The whole old story is the underdog story,” Klinsmann told the media after Saturday’s 1-0 win over Paraguay in Philadelphia. “I cannot hear that story anymore. I want to see them try, risk things. Let’s go for it. If you’re not going to go for it, then sooner or later, they’re going to break you down because they have class players. We have to take the game to them.”

The headline writers have interpreted Klinsmann’s sound bites as a call to arms, a public challenge to his players to produce their best at this crucial moment. But if that angle is truly what’s at the forefront of his thoughts, he’s failing grievously in his own task.

The effort and commitment of US players has hardly ever been in question. Nor has the level of motivation they gain from their leaders. What the Yanks need now is a plan – clear, well-crafted instructions on how to stymie Ecuador, who boast fearsome attacking talent on the wings and rugged levels of speed, athleticism and experience throughout the lineup.

Unfortunately, Klinsmann has only done so much to vanquish the questions of tactical sophistication that have dogged him since his ill-fated stint in charge of Bayern Munich. The overarching themes of the USMNT’s Copa America campaign are spirit, resilience and steely resolve in pivotal moments – the very same as those of the 2014 World Cup, and myriad other episodes under previous management.

The coach’s most influential revelations this month have mostly been “back to the future” corrections: A return to a workmanlike 4-4-2. Fielding right back DeAndre Yedlin at right back. The belated realization that Michael Bradley works best in deep, not attacking, midfield.

Klinsmann brings many rare attributes to his joint role as head coach and technical director. But this week he must focus on just one area, and it’s the one where he himself has the most to prove to the doubters.

Right now, with the wider direction of the program at stake, this team doesn’t need a life coach. It just needs a coach.