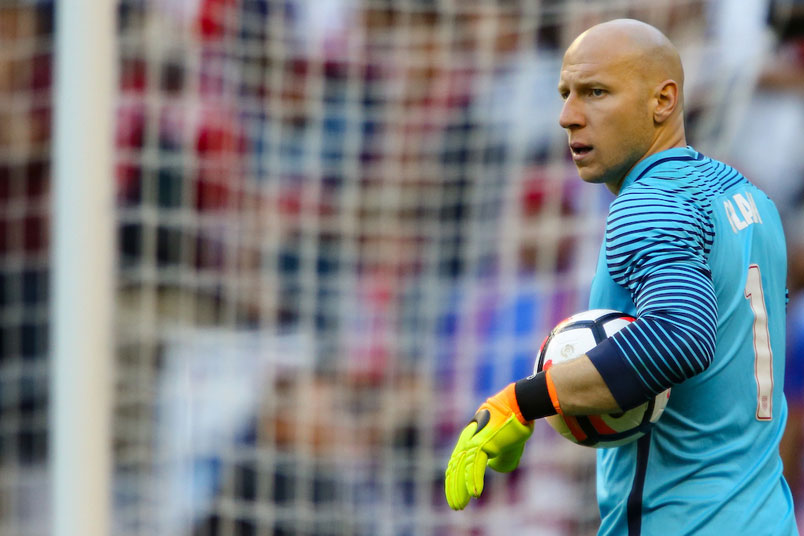 By Charles Boehm – WASHINGTON, DC (Jul 29, 2016) US Soccer Players – Brad Guzan completed his transfer to Middlesbrough FC on Friday. The move brings his eight-year run at Aston Villa to a close, opening a new chapter in Guzan’s career at age 31. It’s a move fraught with both promise and risk. A fork in the road for a man ready to stake his claim for full membership in the pantheon of all-time great American goalkeepers.

On the surface, Guzan’s move might appear a huge relief. It’s a quick return to the Premier League. He leaves the sinking ship that is Villa. That avoids the rough and tumble world of the English Championship.

The past 12 months at Villa Park were trying ones for Guzan and most everyone associated with a proud club fallen on hard times. The Villains suffered through one of the worst Premiership seasons in recent memory. Most of it spent in last place. Their first relegation from the top flight in nearly three decades was certain by April 16.

American businessman Randy Lerner took ownership of the club amid great optimism and excitement a decade ago. Earlier this year, he sold it to Chinese tycoon Xia Jiantong. Lerner cut his losses after pouring millions upon dozens of millions into Villa over the years. Much like Lerner, Guzan found himself standing in front of a firing line week in and week out as things went south on the Claret side of Birmingham.

Not only was he peppered with shots on a regular basis, expected to stand on his head in order to give Villa any chance of escaping doom. He was also subjected to the withering volleys of friendly fire from the fans, blamed for bad results and eviscerated whenever he made a misstep. The supporters turned on many of their erstwhile heroes, perhaps none more harshly than Guzan.

“Heckled on the streets and booed from the stands in recent times, the USA stopper felt the full wrath of relegation,” wrote Birmingham Mail columnist Gregg Evans this week. “That sort of treatment isn’t pleasant, especially for Guzan – one of football’s good guys. There weren’t too many players who came through last season without a pasting from the fans, though.”

As the losses and dropped points stacked up, Guzan in many ways became the walking embodiment of a troubled, frustrated team. He lost his starting job, then won it back. No one in Villa colors could find a way out of the morass. After several years of dodging “the drop,” it finally caught them, staining the reputations and bruising the psyches of all involved. Though he did not seal his next destination until this week, Guzan likely knew his Aston Villa career was reaching its close months ago.

His international fortunes, meanwhile, moved in the opposite direction. Guzan spent years working and waiting as Tim Howard’s understudy, then his platoon mate. USMNT coach Jurgen Klinsmann named Guzan the starter for the Copa Centenario. A gutsy semifinal run unfolded on Guzan’s watch. The 2018 World Cup qualifying campaign is likely his to lead when it resumes this fall.

It’s anyone’s guess just how his Middlesbrough career will unfold. He and his family move some 170 miles north to the banks of the River Tees. He’s part of a promoted club now trying to show that it belongs.

Guzan makes the fourth goalkeeper on the Boro roster. All boast impressive resumes. He arrives on the heels of Victor Valdes, the Spanish backstop of FC Barcelona’s glory years who fell on hard times when he moved to England. Meanwhile, Dimitrios Konstantopoulos was key to Boro’s promotion season. His backup last season, Spaniard Tomas Mejias, carries a blue-chip pedigree as a product of Real Madrid’s system.

Now 34, Valdes is a nimble shot stopper with excellent foot skills. He will be hungry to renew his career after a frustrating time at Manchester United marked by a knee injury and a falling-out with then boss Louis van Gaal. Most observers have been quick to place him above Guzan. Perhaps, that’s influenced by the glowing remarks – and shared Spanish nationality – of Boro manager Aitor Karanka.

The incumbents are no slouches, either. After the sustained success of the past two years, Konstantopoulos has every reason to fight tenaciously for his job now at Premier League level. Mejias is now 27 and in vital need of regular playing time. Given the intensity of the EPL shark tank, no one on Boro’s squad can afford to get too comfortable.

Guzan is not the sort to doubt himself. He won’t quietly concede a bench role at this point in his career. Years spent paying dues behind Brad Friedel at Villa and Howard in the USMNT setup have honed a hunger for a prime role. Yet as many of his US teammates can attest, a move to a new club brings both possibility and peril.

What do the months ahead hold in store for him? It promises to be one of USMNT fandom’s most closely-watched situations in the player pool. After the trials of life at Chivas USA, then Aston Villa, however, it is familiar territory for Guzan.

As he himself wrote in a memorable column for the Players Tribune last year: “I want the big stage. I want the pressure. I want to be between the sticks. So does Timmy. So does Frieds. If we didn’t want that, what kind of Americans would we be?”