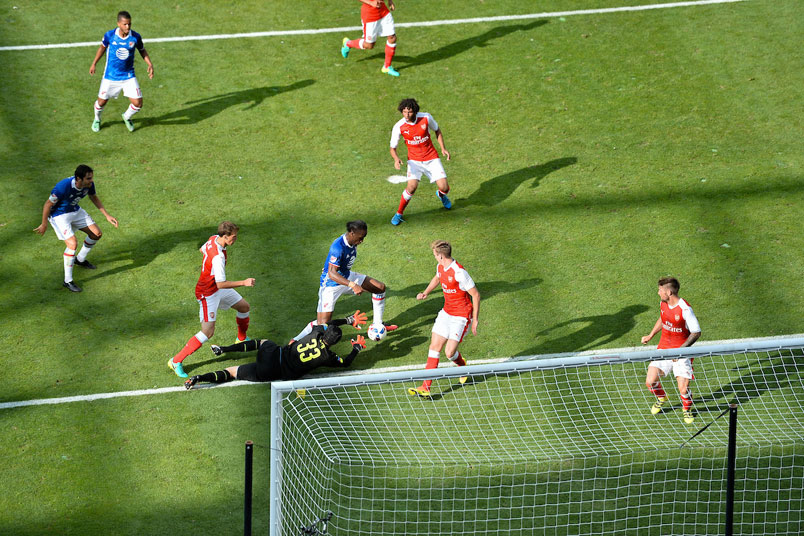 Was there a penalty controversy? Laurent Ciman and Andre Blake, having never played together and speaking different languages, failed to communicate on Joel Campbell’s drive into the box. That led to a sequence where Blake found himself out of position and Ciman got his legs tangled with the Costa Rican. There’s an argument that that Ciman didn’t actually do much wrong and that when referee Chris Penso pointed to the spot, he did the MLS All-Stars and the game a disservice.

That’s a lot of digging.

Didier Drogba’s showdown against former teammate Petr Cech got a lot of attention on the night. There was at least some intrigue over who would get the better end of the matchup. Could Cech keep Drogba off the score sheet? The two spent years training and playing together as members of Chelsea.

It took Drogba three attempts on a single chance, but he did finally beat Cech for a goal. At 38, Drogba remains a marvel of technique, power, and intelligent movement. Although, all he really needed in this case was a calm head. With the goal, Drogba now has bragging rights on Cech, something the goalkeeper indicated before the game that Drogba would not hesitate to use.

“Obviously I hope that he doesn’t score because then for a whole year he would text me a picture of the goal,” Cech joked. Score one for MLS. Score one for Drogba as well, who maintains his reputation as the Arsenal-killer. As the league’s website was quick to point out, that was Drogba’s 19th goal in all competitions against the Gunners. Apparently, the MLS All-Star Game counts as “a competition”. Who knew?

Drogba scored the lone MLS goal, but that doesn’t mean the “hometown team” didn’t have other chances. The fans voted Andrea Pirlo into the starting lineup. Though All-Star manager Dominic Kinnear did the right thing by pulling Pirlo and NYCFC teammate David Villa after half an hour, they made for a stronger MLS team. Why the short playing time? Their league game in the Bronx on Saturday.

Pirlo provided some magic worth noting. His amazing ability to drop long balls from a deep-lying position onto the toes of teammates is an asset. Regardless of familiarity, Pirlo does what he does. Early on, the LA Galaxy’s Gio dos Santos found himself on the end of Pirlo genius. Dos Santos was not able to score on the chance. Still, in a game that produced just a few goals, Pirlo’s pass earns a gold star.

There were other chances for the MLS side, including a few good ones. Chris Wondolowski fired a shot over the bar late in the match after Cyle Larin dug out a long pass. Sebastian Giovinco danced his way into a shot saved with a fingertip by Cech. Giovinco, like Pirlo, Villa, and Drogba, lived up to their pedigree.

Some light digging there. Stars being stars is why there’s an All-Star Game after all.

The real story of the 2016 MLS All-Star game requires no digging at all. All of the MLS All-Stars will now return to their teams ready to get back into the real competition and help with the push to the playoffs. In other words, no one got hurt. Hooray!

A headline from the Orlando Sentinel does a wonderful job of summing up that news, from a local, individual perspective. Orlando City had Cyle Larin in the game in San Jose, but the real concern always lies with 34-year old Kaka. “MLS All-Stars fall to Arsenal, Kaka stays healthy.”

The All-Star Game may have some entertainment value. There’s always a chance that it brings in new fans. It might even create a few talking points for later in the season. We’re digging on that last one. Orlando City’s situation is familiar to every team in the league. Kaka has been in an out of their lineup. They desperately need him to help start the Jason Kreis era.  The risk of injury needs to be in games that count.

With that exercise over and done, Kaka and his colleagues can get back to the business of trying to win an MLS Cup this season. No need to dig for story lines there.