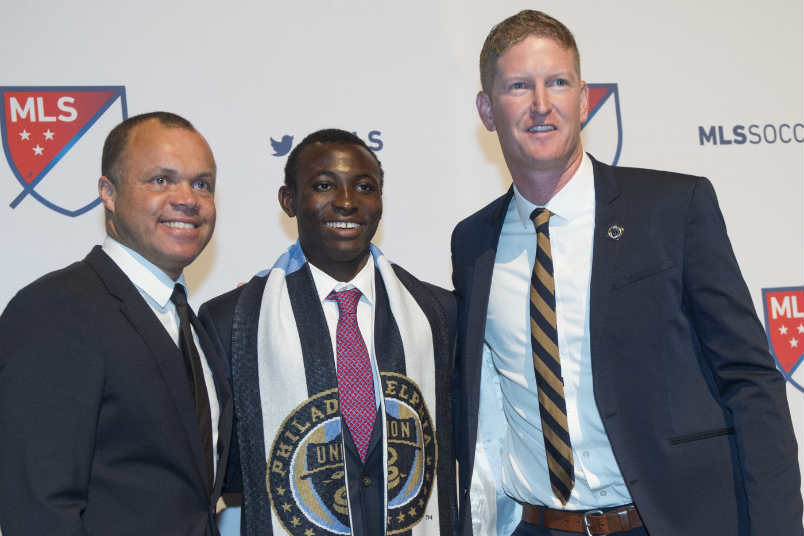 By Clemente Lisi – NEW YORK, NY (Jul 17, 2016) US Soccer Players – As the Major League Soccer season reached its halfway point, many teams are overachieving. In the Eastern Conference, NYCFC is in first. In the West, the Colorado Rapids have come out of nowhere and are now in second to FC Dallas. But the team that has impressed me most is the Philadelphia Union. It is a team built on youth and one that hopes to challenge for the title for the next few years.

In a year that is fast becoming one of the underdog, it seems only natural the Union would contend for MLS Cup. It started with long-shot Leicester City becoming English Premier League champions in May. It continued a few weeks ago with Iceland. With just 330,000 inhabitants and 22,000 registered players, they reached the quarterfinals of the European Championship. Last week, Ecuador’s Independiente del Valle reached the Copa Libertadores final. That’s staggering for a team that until 2010 had never played in its country’s first division. There is sort of a badge of honor that now comes with being an underdog.

Now there’s the Union. Could the Union become this country’s Leicester City this season? This year’s Union has been ticking all the right boxes. It has great front office management in place, an astute coach, and several standout youth players. And yes, they have been hot over the past few months. The challenge in MLS is to stay hot throughout the summer, down the stretch, and into the playoffs. That’s a tall order for any MLS team. For Philadelphia, it may prove impossible. For the time being, it is a challenge the Union is up for in 2016. The Union is currently second in the Eastern Conference, just three points behind NYCFC, with an 8-6-6 record.

They got here the old fashioned way, through drafting quality players. Their USL affiliate Bethlehem Steel has helped. The Union has used 10 players under age 25 this season. The team has already won eight games in 2016. Compare that to 2015 when they won just 10 all season. Even the playoffs are a big step for this club. It’s happened just once in the team’s six-year history.

Former USMNT player Earnie Stewart led the club’s overhaul over the off season. Stewart started 2015-16 in his familiar role as technical director for AZ Alkmaar. That Dutch topflight team was playing in Europe and progressing. Stewart opted to leave mid-season, taking the job in Philadelphia.

Stewart made two saves to add draft picks. That resulted in a trifecta of rookies. Joshua Yaro (#2 pick), Keegan Rosenberry (#3), and Fabian Herbers (#6) all ended up in the first team. Rosenberry, a right back, has become a starter and is a candidate for Rookie of the Year.

Relying on youth isn’t an obvious move in MLS. The downside is large. Fans tend to prefer stars contributing immediately. Signing big name designated players isn’t in the Union’s budget. The team’s payroll is about $6 million. Compare that to Toronto FC at $20 million and you can see how stark the difference is.

Where playing in MLS is a bonus is that question of time. Normally, a youth movement is code for a multi-season rebuild. That means patience from a fan base. It means shared belief in a process. MLS is different. The salary restraints and single-entity means results can come sooner than later. MLS is unpredictable and the playoffs offer a wide safety net. Philadelphia doesn’t need to win the regular season. They just have to make the playoffs.

Union coach Jim Curtin is well aware. He knows this league as a player, an assistant, and a head coach. He has the fighting spirit this league requires.

“When we lose, we bounce right back. It’s a sign of a good team, even though when Earnie and I talk, we know that we can be better,” Curtain said.

Philadelphia played a derby game on Sunday at home against the Red Bulls. Down 2-0 at halftime, the Union and that home crowd responded. The Union ended up splitting the points, but they were also the aggressor playing a man down late. They did it on national cable, one of only three Union games available across the country this season.
Red Bulls coach Jesse Marsch heaped praised on Curtin. The two were teammates at Chivas USA.

“Whatever coaching level he wanted to pursue I knew he would be successful,” Marsch said. “He’s done a really good job with that team this year.”

How will the Union measure success in 2016? Making the postseason would be a major accomplishment. What about finishing first in the Eastern Conference? Winning the Supporters’ Shield? Lifting MLS Cup? It’s all possible in the year of the underdog.