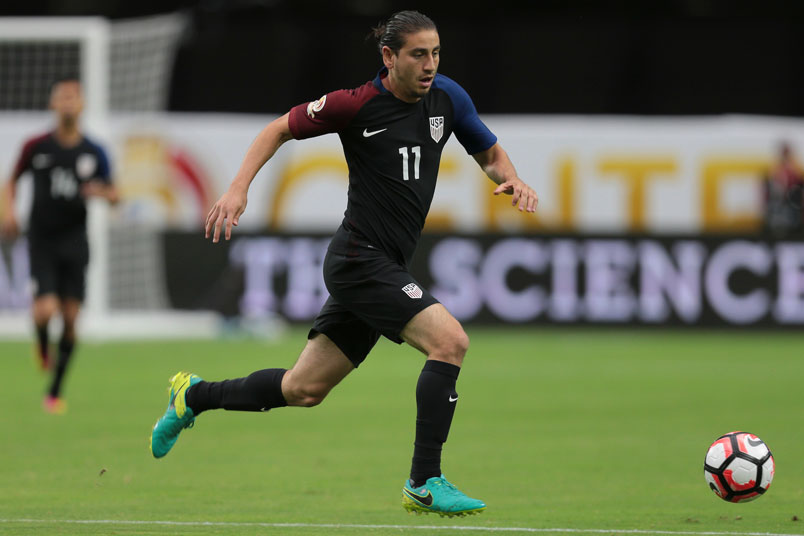 By Jason Davis – WASHINGTON, DC (Aug 10, 2016) US Soccer Players – The Philadelphia Union officially introduced their big summer signing to the press on Tuesday morning. Alejandro Bedoya, the USMNT midfielder last seen playing a large role in the Copa Centenario semifinal run. He  arrives in Major League Soccer at the age of 29.

Bedoya’s European resume and his play are well known. He was an established American abroad, one with options. The Union’s investment in Bedoya is significant. That means significant expectations. Philadelphia is pushing to make the playoffs for the first time since 2011. Bedoya goes from wondering about Nantes’ chances in the new Ligue 1 season to a playoff race in MLS.

There’s no question for why the Union wanted Bedoya. He fits the team’s self-image. Unflashy but competent in multiple areas of the game, he’s the soccer version of a “blue collar” player. Labels like that can be superficial and simplistic. Still, there’s no arguing that Bedoya’s work ethic is strong. Fans typically respond well to players known for their effort. Bedoya will get support, especially in Philadelphia.

He might need it. He’s a million dollar midfielder who never stops running. He covers immense ground and provides good defensive cover. Now and then, he even gets into the attack. For some, that’s not worth a million dollars of MLS money. The usual thinking is that seven-figure players in MLS should score. Big money is best spent on offensive players. Goals sell tickets. More importantly, they serve as clear indicators of dominance in a sport that lacks for obvious statistical indicators.

Bedoya won’t score a lot of goals. He won’t rack up more than a handful of assists. That’s not his game, and the Union know it. Philadelphia is getting a heady, box-to-box type midfielder. He can play wide but is best deployed in the middle. He can push forward but is most effective from the center circle. He can play combinations but is best at serving as a link between the back and forward lines.

In other words, Bedoya quite often does his job without standing out. Appreciation for his work with the national team ranges across the spectrum, even among close observers of the team. For some, he’s an indispensable part of the larger whole. He’s a glue player necessary to make everything function within a team unit. For others, he’s ineffective and often anonymous, seldom appearing in the key areas.

The gray area nature of Bedoya’s game is what makes his move to MLS at this point in his career fascinating. He is a litmus test as a player. An MLS team chose to pay for someone without a marquee skill. Thanks to an international resume and a reputation built in Europe, he’ll help set the market for players like him. If he succeeds. If he fails, we may see clubs turn away from midfielders who don’t score many goals or make incredible defense-splitting passes on a regular basis.

At his press conference, Bedoya addressed the perception that his signing with MLS represented a step back in his aspirations.

“…for people that want to say I’ve been taking the [air quotes] easy way [end air quotes] or whatever they say, coming back to MLS…that’s a lot of B.S.,” Bedoya said. “Because I’ve done the hard stuff and I’ve been able to perform in Europe in a top club like Nantes in one of the best leagues. And I’m coming here for a bunch of different reasons and one of them now is another new challenge that’s in front of me: Being a part of this Philly team and taking them into the playoffs and making a run.”

Bedoya’s framing of the challenge he faces in Philadelphia is important. It’s another clear message that players view their career choices in a holistic fashion. That doesn’t always align with the wishes of national team fans or, for that matter, its coach. Rather than speak to the level of competition and the battle for places, Bedoya is echoing the sentiment of American players who came before him. The challenge in MLS is distinct, but not less significant, than the challenge in Europe.

It almost doesn’t matter if that idea is true. The pressure Bedoya experienced in the more intense heat of Europe’s soccer culture might not be that different from what he faces as a star player in Philadelphia’s midfield. At least for him. He’s no longer one of the numbers in a mid-table French side. Now he’s a high profile addition to a team that has been chasing a playoff target all season.