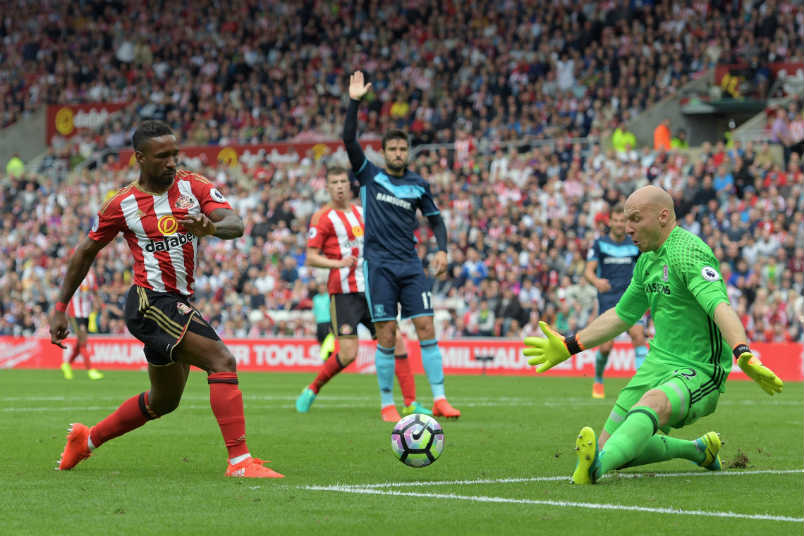 There’s certainly a goalkeeping battle brewing at Middlesbrough and USMNT player Brad Guzan is right in the middle of it. Guzan got the starting nod for Boro in their 2-1 win over Sunderland at the Stadium of Light. Christian Stuani scored for Middlesbrough in the 13th and 45th minutes. Sunderland got a goal back in the 71st.

“Today we had a derby, and a lot of pressure and emotions,” Boro head coach Aitor Karanka said. “The players handled the game really well. We are playing really well, with our intensity, and it’s important for us to continue to add points as soon as possible.”

A league down, Jonathan Spector subbed out in the 76th minute for Birmingham City in their 3-1 loss to local rival Wolves. Che Adams put Birmingham City up at home in the 24th. Wolves leveled the score in the 47th and were ahead for good in the 61st. They added a third goal in the 89th minute.

We’re massively disappointed with it,” Spector said. “We came in at half-time in a great position; 1-0 up, we played well, we just needed to do more of the same.” added the full-back. We came out second-half, conceded early and then conceded shortly after that. It’s just not good enough as a group to do that.”

Eric Lichaj subbed on in the 39th minute for Nottingham Forest in their 4-3 win over Wigan Athletic. Britt Assombalonga put Forest up at home in the 6th minute with Wigan equalizing in the 11th. Oliver Burke scored for Forest in the 53rd with Wigan equalizing through William Grigg in the 65th. The two teams traded goals again with Burke scoring in the 78th and Grigg equalizing in the 86th. Thomas Lam won the game three minutes into stoppage time. Danny Williams and Reading drew 2-2 at home to Brighton. Jon Swift scored for Reading in the 2nd minute with an own goal leveling the score in the 8th. Brighton took the lead in the 46th with Paul McShane equalizing in the 59th.

Perry Kitchen subbed out in the 70th minute for Hearts who had no trouble with Inverness in a 5-1 win at Tynecastle. Don Cowie and Sam Nicholson both scored twice in a game where Inverness didn’t get a goal until the 87th minute.

Germany’s Bundesliga is still a week away, but there was plenty of cup action. Julian Green subbed on in the 66th minute for Bayern Munich in their 5-0 shutout at Carl Zeiss Jena. Robert Lewandowski had a hat trick. John Brooks subbed out at halftime for Hertha BSC in a tough DFB Cup game against Jahn Regensburg. The game ended 1-1 with Hertha BSC advancing 5-3 on penalties. Hertha trailed from the 51st minute with Mitchell Weiser equalizing in the 84th. With the game still 1-1 after extra time, Hertha BSC converted all of its penalties with Regensburg failing on their fourth attempt.

Alfredo Morales subbed out in the 101st for Ingolstadt who knocked out Erzgebirge Aue on penalties 8-7. That game finished scoreless through extra time. Jerome Kiesewetter subbed out in the 84th minute for Fortuna Dusseldorf in their 2-0 win at Hansa Rostock. Marcel Sobottka scored in the 21st and 57th minutes with Ihias Bebou making it 3-0 in the 62nd.

In the Eredivisie, Rubio Rubin subbed out in the 70th minute for Utrecht’s 2-1 loss to AZ. Patrick Joosten cancelled out AZ’s 25th minute opener with his goal in the 53rd. AZ scored their winner in the 84th minute.

Jose Torres got the better in a meeting of USMNT players with Tigres coming back to beat Omar Gonzalez’s Pachuca 4-2 at home. Hirving Lozano put Pachuca up in the 22nd minute. Tigres answered with goals from Andre Gignac in the 23rd and 32nd minute and Ismael Sosa in the 51st. Pachuca pulled a goal back in the 59th but Sosa scored again in the 64th.

In another meeting of USMNT players in Liga MX, William Yarbrough and Leon got the better of Jonathan Bornstein’s Queretaro in a 2-1 win. Mauro Boselli put Leon up in the 19th minute with Bornstein equalizing in the 39th. Boselli scored Leon’s winner in the 53rd minute. Michael Orozco’s Tijuana drew 1-1 at Necaxa. Trailing from the 29th minute, Dayro Moreno converted a penalty in the 63rd.