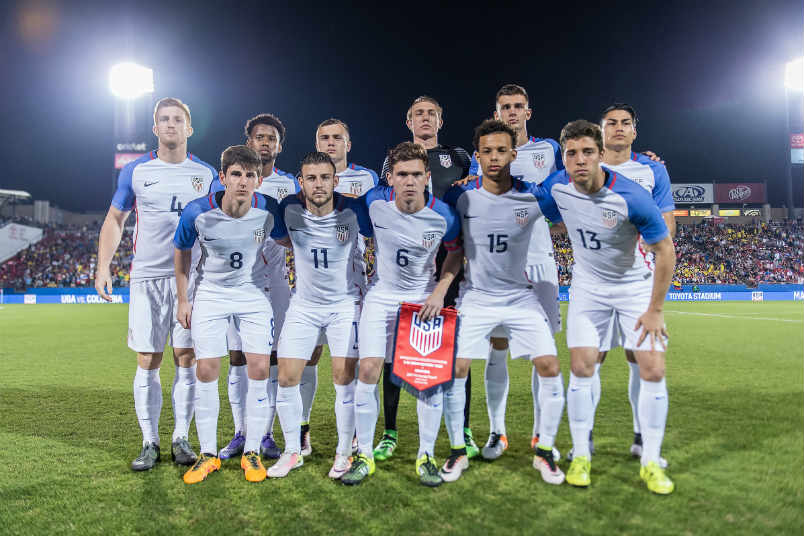 By Charles Boehm – WASHINGTON, DC (Aug 4, 2016) US Soccer Players – The US Women’s National Team opened their Olympic tournament run on Wednesday night. They stepped into the national and global spotlight . It’s the Olympics after all. For the second straight Summer Games, the US Men are not taking part.

As with so many unpleasant topics, the human instinct for people who care about the program is to push this streak of failure to the back of our minds and think about something else. Olympic men’s soccer is a youth tournament. It’s not even sanctioned by FIFA, after all. It draws a fraction of the audience or interest level of the World Cup. Or the Euros. Or even gimmicky events like Copa America Centenario.

The U-23s had one bad game. It just happened to come in the must-win qualifying semifinal against Honduras last fall. That plunged them into a perilous home-and-home playoff vs Colombia. Los Cafeteros took the two legs on aggregate. Few who watched would argue that the better team didn’t win. We’ll get ’em next time, we tell ourselves. Even as we nervously consider the unflattering look it gives youth development.

It’s equal parts understandable and unsettling to see many of the people in charge take more or less exactly the same tack.

“The Olympics, to be honest, are not the World Cup,” US U-20s head coach and youth technical director Tab Ramos told AmericanSoccerNow.com earlier this year. “I know that it was a lost opportunity for us. I get it. I know that’s how we think at US Soccer. We like to go to the Olympics every time. But the lost opportunity is not as big as a lot of people may think. At the end of the day, Olympic soccer is a secondary tournament in the men’s sport.”

I probably shouldn’t be surprised to hear one of the technical staff’s leaders soft-pedal the impact of falling short on one of their top priorities of the past two years. It’s jarring just the same. Other educated observers have been much less sanguine.

“I look at it as a pretty sizable blow,” retired USMNT legend Brian McBride said in an appearance on ESPN FC after the U-23s’ playoff loss. McBride came out of international retirement to captain the talented 2008 Olympic side as an overage player in Beijing. He pointed to the massive benefits that occasion provided for the likes of Jozy Altidore, Michael Bradley and Stuart Holden.

“There were only four players from that [2008] team that didn’t actually get opportunities to play [professionally] in Europe. And that is a big growth factor,” added McBride. “Also, six of those players from the 2008 team played in the 2010 World Cup. And that experience you gain from playing in a tournament like that is invaluable.”

Alexi Lalas, himself a 1992 Olympian, said much the same to Fox Sports this week.

Holden used even stronger terms in the same piece.

“It’s hugely damaging. Having been a part of one, I knew how instrumental that was for my development as a player,” he said. “All these players are missing out on yet another major tournament.”

Ramos’ boss Jurgen Klinsmann has said much the same, referring to the group that missed out on the 2012 Olympics a “lost generation.” That’s why we were all told this cycle was such a priority. And as the action kicks off across Brazil this week, it’s easier than ever to see why.

FIFA does its best to limit the scope and appeal of the Olympic tournament. Rather amusingly, it fears it growing into a competitor to the World Cup in terms of interest. Yet this event is drawing broad attention across the soccer world just the same. Limiting it to mainly U-23 players has ironically added to the appeal in some ways. It makes it a leading showcase for elite young talents on their way to greater prominence.

As McBride alluded to, playing well in the Olympics is a great way to draw the attention of big European clubs shopping for talent. Soccer also gets caught up the wider Olympic fever. Millions around the planet tune in and invest emotionally in the sights, sounds, and stories of such a big spectacle. Those who shine can quickly become household names above and beyond sports. Just watch the many commercials and promotions featuring the US Women this month.

It’s a huge setback for the men to miss out on this party. But it’s unclear whether anyone in charge was or will be held to account. U-23 coaches are generally staff assistants tasked with the job and returned to prior duties whenever the cycle ends. So it’s been with Andi Herzog. It seems that the drawn out time frame of the qualification process allowed this slow-motion fiasco slip from everyone’s minds by the time Rio 2016 kicked off. More frustratingly, we’ve heard little response or stock-taking on the part of the federation. Ramos told ASN that “we were as well prepared as we could have been” and suggested that the approach to the next Olympic cycle will be similar.

It was once said of France’s ruling Bourbon dynasty that “they had learned nothing and forgotten nothing.” Perhaps the same applies to US Soccer’s back-to-back Olympic failures. Those hurt worst, in the end, are the players themselves.