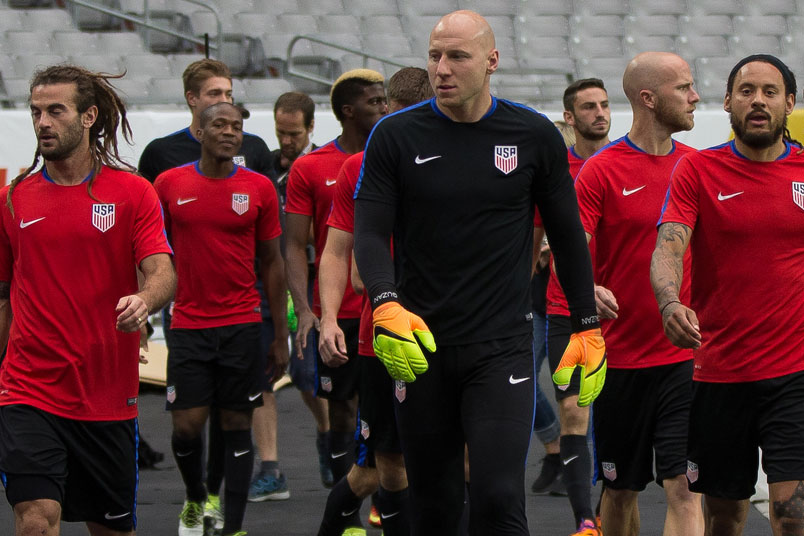 By Clemente Lisi – NEW YORK, NY (Aug 29, 2016) US Soccer Players – The USMNT returns to action this week for the first time since reaching the semifinals of the Copa Centenario. The September window means a pair of World Cup Qualifiers versus two island nations. They’re on the road versus St Vincent & the Grenadines on September 2 (3:30pm ET – beIN Sport). Then it’s home against Trinidad & Tobago four days later (8pm ET – Fox Sports 1). These are both winnable games. The USMNT is on an upswing coming off of the Centenario. Still, they know better than to underestimate a CONCACAF opponent.

The matches also mark the start of a 14-month period where there will be little time for mistakes. Tinkering with lineups and tactics may be a thing of the past for Klinsmann.  CONCACAF has stretched the final round of qualifying over two years. At the same time, FIFA has reduced the dates on its international calendar starting next year. That move was to appease European clubs. For everybody else, it’s a schedule crunch leaving less time to play friendlies. The USMNT will also play in the Gold Cup next summer. That adds another layer of competitive regional games to the already congested mix.

There could’ve been more games. the Confederations Cup is also next summer. It’s hard to think of the mini-World Cup as a time to experiment. Instead, it’s a chance to familiarize teams with the venues and the country ahead of the World Cup. From this point on, the United States has to play every game to win.

The USMNT works toward the September games ranked 26th in the world. They have a large group of MLS players approaching playoff form. There’s also a core of European-based players who are just starting their club seasons. That’s a plus for Klinsmann. At the Copa Centenario he used the same starting IX in three straight games. That’s something a US coach had not done since the 1930 World Cup. That provided both the coaching staff with a base to work with and the players with some sense of stability heading into next year.

“We definitely think that the group that got fourth (place) in the Copa America deserves a certain priority going on to the next World Cup qualifiers because they did tremendously well in the Copa America,” Klinsmann said in a news release Sunday. “It was an exciting tournament with great games. The whole group learned a lot, playing teams like Colombia, Ecuador and Argentina. This is a big stage, and they deserve to come back and confirm what they did in the tournament in these upcoming, very important World Cup Qualifiers.”

Here’s a look ahead to what lies ahead for the USMNT and what to expect as it resumes its journey to Russia 2018:

Klinsmann will gather his players this week in Florida. They play at St Vincent & the Grenadines on Friday and Trinidad & Tobago on September 5 at EverBank Field in Jacksonville. Games in the Caribbean are always a tricky proposition. Anything less than the full six points will be a disappointment. It’s worth noting that T&T is a team on the rise. It has a core of European-based players. That’s turning them into one of the best sides to come out of that country since qualifying for Germany ’06. The Americans, however, are 4-0 in Jacksonville dating back to 1997.

The United States will be without Clint Dempsey, but Jozy Altidore is back from injury. Look to Altidore for the goals. He’s scoring regularly in MLS and leads this group of players in World Cup qualifying goals.

The defense hasGeoff Cameron and John Brooks both coming off strong Copa Centenario performances. Omar Gonzalez, overlooked for the Copa, also got the call-up. Brad Guzan is likely to be the starter in goal. Tim Howard provides the team with a great back-up should Klinsmann choose to switch it up.

This will be the chance for the United States to play some friendlies. Unfortunately, the opposition isn’t strong. The October 2 game in Havana versus Cuba appears to be more about diplomacy than soccer. Even so, it will be good to play in the Caribbean given the type of teams and travel schedule in the Hex.

Eight days later, it’s USMNT vs New Zealand at RFK Stadium in Washington, DC. Klinsmann will have his European-based players at his disposal for both games. Expect this to be a place where he experiments with a player or two. These games will be confidence-builders entering the 10-game Hexagonal.

This is where the schedule becomes intense. The month will feature two games to start the final round of World Cup qualifying. Based on the draw earlier this year, the United States is likely to face Mexico, followed by Costa Rica. That would be a tough start to the whole thing.

Mexico will finish first in Group A. In Group C, the USMNT trails Trinidad & Tobago going into the final two games. The schedule calls for the Group C winner to host the winner of Group A1 (Mexico). Forget about the Guerra Fria this time around.

Costa Rica, meanwhile, is in first place in Group B, just three points ahead of Panama. If Costa Rica and the US both win their respective groups, the sides will meet on November 14 in Costa Rica.

January camp may be the only real chance for Klinsmann to look at players. This isn’t a FIFA date, so expect what we regularly see in January. MLS players. European players that need games. Opponents that aren’t as strong as they would be on an official FIFA date.

There are no official FIFA dates in January or February. March 20th and 28th are the next two times the United States will get the chance to play. Both these dates have been set aside by CONCACAF for Hexagonal matches.

The United States will again host the Gold Cup. The tournament runs from July 9-30. The US and Mexico, as always, enter the competition as favorites.

The top three teams in the Hexagonal advance to Russia ‘18. The 4th-place finisher in CONCACAF will play the 5th-place team from Asia over two legs on November 6 and 14.