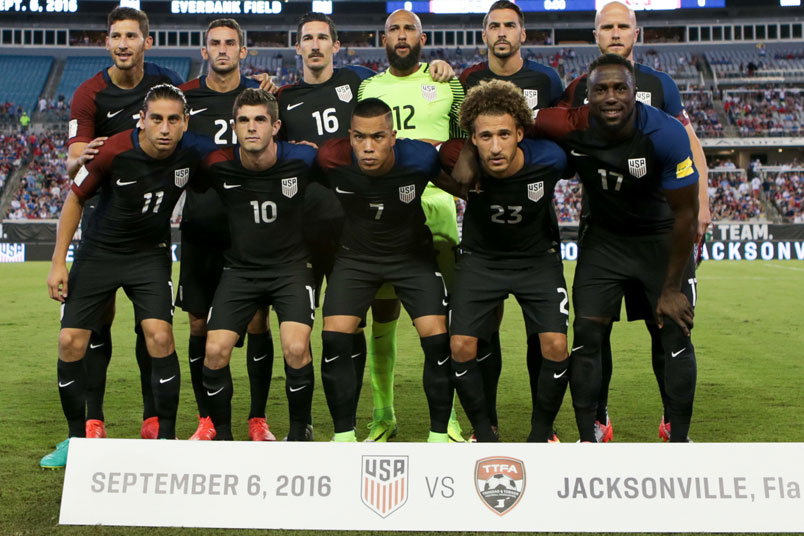 By Jason Davis – WASHINGTON, DC (Sep 7, 2016) US Soccer Players – Jurgen Klinsmann certainly didn’t do what so many of us thought he would. The expectations for the final Group C World Cup qualifier leaned toward practical. Name a solid eleven capable of getting the job done against Trinidad & Tobago in Jacksonville. One that would put stopping Trinidad & Tobago’s speedy attack first among its priorities and then work from that platform to score any goals.

Those expectations were built on so many other lineup choices from Klinsmann over the last five years. Lineups that failed to measure up to the front-foot, aggressive attitude Klinsmann so often says he wants. More often than not, the USMNT head coach had chosen to go with teams that could only be called “conservative” in the face of an impending challenge. Sometimes it had to do with the opponent. Most times, the talent advantages of the Americans seemed not to matter.

What Klinsmann did on Tuesday night was throw (some) caution to the wind. Again, the chances that the Americans would miss out on the Hex were essentially nil. So though he could have justified rolling out a team that lacked an adventurous spirit, Klinsmann instead took the opportunity to give a start to a number of players who think forward first.

The most intriguing name in the eleven was the one who created the most discussion heading into the game: Christian Pulisic. At just 17, Pulisic is an extremely young player who nevertheless has shown immense potential in his limited time playing for both Borussia Dortmund of the German Bundesliga and the USMNT. Perhaps not since Landon Donovan has the United States produced a player who arrived looking so ready to become a major part of every team the Americans put out in every game of consequence. Pulisic’s instincts, touch, and understanding of the game put him on a level unseen in an American teenager.

Klinsmann made sure to downplay some of the hype around Pulisic in the buildup to the game. Preaching patience, he spoke to how long Pulisic had to go before he could be called a complete player. Then, Klinsmann being Klinsmann, he started Pulisic in a midfield quartet that also included the previously banished Sacha Kljestan. Remember, Kljestan was a late addition to the squad for this round of matches. He replaced the injured John Brooks on the roster just days ahead of the start of camp. Suddenly, the Red Bulls midfielder is first-choice in a game that would serve as both the final piece of Hex qualification and a platform from which the team would build into the last round.

The choices paid off. Pulisic made a case to be a starter every time out. Kljestan, after a slow start, grew into the game first with a goal then as a playmaker as the Americans salted away the win. Even better, the pair worked well together, showing an understanding of space and movement the speaks to their soccer intelligence and current form. The Americans raised their level in the second half, and almost all of it came down to a conscience decision to involved the teenager at every possible turn. A very clear shift from right (manned by full back Geoff Cameron and midfielder Alejandro Bedoya) to left (fullback: Fabian Johnson, midfielder: Christian Pulisic) facilitated the pressure and chance-creation that led to all three second-half goals.

For all the positives Pulisic and Kljestan brought to the team, the combination of Bobby Wood and Jozy Altidore up top failed to produce much over the course of an hour. It’s not that either player was bad, it was that they similarity in their games prevented them from working well ahead of Kljestan. Altidore scored just before Wood was removed for Jordan Morris, but the goal came with the Hamburg striker dropped deep and allowed Altidore to occupy the central of the T&T defense.

Altidore’s form is a major takeaway from the match heading into the gauntlet of the Hex. When he’s on his game, there is no one like him in the American player pool. The combination of power, touch, and goal-scoring makes him an immensely important part of any team Klinsmann runs out in the next round. Against T&T, Altidore showed every bit of his skill as well as his fully evolved hold-up ability. If finding a partner to work with the TFC forward is Klinsmann’s biggest problem coming out of the win, it’s a good problem to have. No matter what he decides to do, he has a rampant center forward at his disposal.

Amid the excitement over Pulisic, the redemptive influence of Kljestan, and the form of Altidore, the important thing is that the United States advanced. The Hex will present its own challenges. Namely, opening at home against Mexico followed by a road trip to Costa Rica four days later. That’s the reward for finishing atop their fourth round group. However, the format is incredibly forgiving. Barring a series of disastrous performances, the USMNT is in line to make its eighth-straight World Cup.

They may arrive in Russia with an emerging group of talented young players. Pulisic will be chief among them .They’re the forefront of the quest to reach Klinsmann’s goal of a semifinal berth in part because of surprising lineup choices made nearly two years before the tournament begins.