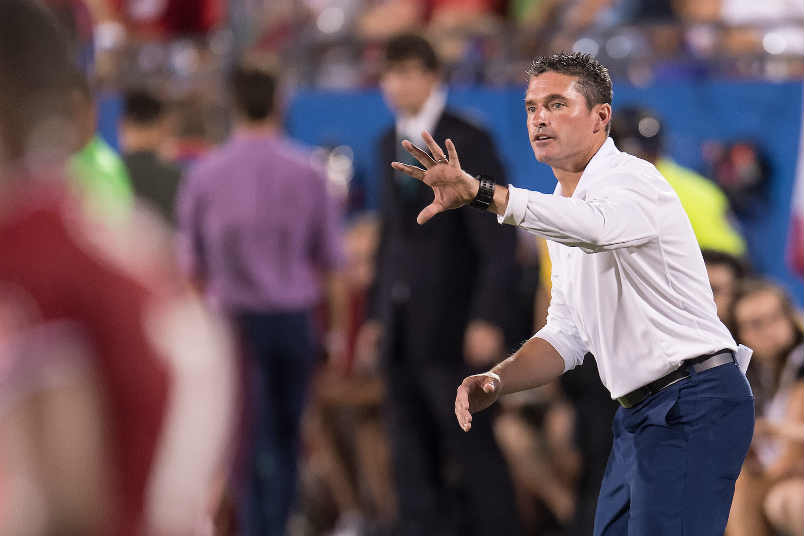 By Jason Davis – WASHINGTON, DC (Sep 16, 2016) US Soccer Players – It took six and a half months, but the MLS regular season has finally reached the point in its long, slow, amble towards the playoffs when the games really start to matter. As teams around the league approach the 30-game played milestone, matches featuring sides either chasing a playoff berth or looking to improve their seed take on amplified importance. With so much of the campaign now in the rear-view mirror, MLS head coaches are not only asking their players to increase their intensity and focus in on the goal in front of them, but also to ignore the pain and fatigue that so many months of soccer has wrought.

Some teams are stronger than others entering this crucial stretch, and it will show on the field. Injuries are a part of it, but there’s also a less-visible fatigue element at play. A careful watch of lineups through the final six weeks of the regular season will reveal which teams are cognizant of the problem and see the need to rotate their starters to address it.

A full round of games this weekend won’t provide any real clarity as to who will eventually make the playoffs, but it will take some teams a step closer to doing so. There are big games on the schedule, games that will produce six points swings should they end with a winner. Let’s take a look at a few of those games and their potential ramifications.

New England’s recent turnaround will mean nothing if they can’t keep up the momentum and string together the results that will get them the points necessary to get above the red line in the Eastern Conference. Two wins in a row is a start, but the Revs left their revival late enough that there’s a chance they’ll just run out of time. Because winning on the road in Major League Soccer is so difficult, it’s a lot to ask for New England to grab a victory in Quebec, but it’s probably what’s needed.

The Impact are in the playoff places, but no one should deem them comfortably so. A loss to the Revolution and a win by Orlando would put both of those clubs within a single victory of Montreal. With the margins so thin Mauro Biello will need the continued good play of Ignacio Piatti in the hole and Matteo Mancosu at forward. Mancosu joined the team in the summer on loan from Bologna (a club also owned by Impact owner Joey Saputo) and has given them a spark. Didier Drogba’s influence is on the wane, and it seems clear the club will need Mancosu to stay on form if they’re going not only make noise in the playoffs, but simply make the playoffs in the first place.

The return of Landon Donovan to the Galaxy dominated the headlines last week, but the important story from a team standpoint was their comprehensive 4-1 win over Orlando City. The win has Bruce Arena’s team dreaming of a Supporters’ Shield. They’ll likely need points on the road to keep pace with FC Dallas. That would turn two games against Oscar Pareja and company in the final three weeks of the season into meaningful clashes.

Just like last week, all eyes will be on Donovan to see what sort of contribution he can make. A match on the road against Sporting KC is an excellent place to see if the all-time great still has enough in his tank to influence a game in a substitute appearance. Games in Kansas City are typically fast and physical, putting an even greater emphasis than usual on LA’s depth. This might not be the game to risk Steven Gerrard coming off a hamstring injury.

Sporting needs a win just to give themselves a cushion in the Western Conference standings above a couple of chasing sides. The recent problem has been inconsistency. After both of their most recent wins, they lost and then drew. On the plus side for coach Peter Vermes, if that pattern holds, his team is due for a victory.

On the surface, the Cascadia clash between Seattle and Vancouver doesn’t look like one with playoff implications. Neither team is in the playoffs places at the moment, though Vancouver is just below the red line in seventh place.

If either side is going to make the postseason, a win is definitely in order on Saturday. For the Whitecaps, being in seventh and four points back of sixth place Portland is something of a mirage. Vancouver has already played 29 games, leaving them little time to pad their point total. Seattle and San Jose actually on better points-per-game averages. Carl Robinson’s team appeared to wake up a bit last weekend in Columbus where they won 3-1. Winning on the road in Seattle is very different from nabbing a victory in Ohio.

The Sounders got good news this week with Clint Dempsey’s return to practice, but there’s no real expectation the team’s second leading goal-scoring will suit up to play against Vancouver. Perhaps Dempsey can bring an emotional boost to a team that must still rely on Nicolas Lodeiro and Jordan Morris to be the leading edge of the club’s attack. They need to show improvement after last weekend’s disappointing showing on the road in San Jose.