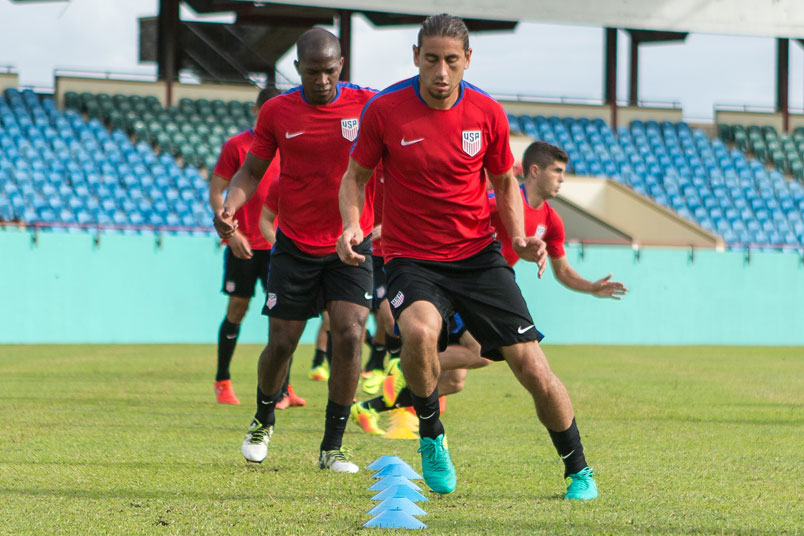 By Jason Davis – WASHINGTON, DC (Sep 2, 2016) US Soccer Players – The USMNT hasn’t played a competitive match since losing the 3rd-place game at the Copa Centenario on June 25. Since then, much has changed. While many familiar faces are back in the squad there are several questions. The team takes to a bumpy cricket pitch on the island of St Vincent with a berth in the Hex on the line.

First, a word about the hosts, St. Vincent and the Grenadines. Nicknamed “Vincy Heat”, the Caribbean nation currently ranks 156th out of 209 FIFA member nations. Through four of six games in the third round of CONCACAF qualifying, St Vincent & the Grenadines is winless with a -16 goal differential. That’s already eliminated them from advancing out of group C. Most of their squad are domestic-based players, with a couple of exceptions. Seattle Sounders midfielder Oalex Anderson is the most notable of that group.

That doesn’t mean that the United States has the luxury of looking past them. If nothing else, the unique conditions on the island will make the game trickier. Memories of a last minute American goal in Antigua and Barbuda needed to secure a victory in the third round of 2014 World Cup qualifying remain sharp. Back then, a deluge and questionable field conditions conspired to make what should have been a simple three points a nail-biting affair. Throw in some issues with personal and real uncertainty about how the USMNT will line up, and there’s reason to worry.

Win, and the USMNT shifts focus to the final round of CONCACAF World Cup qualifying. Tuesday’s game against Trinidad and Tobago suddenly becomes a chance to experiment.

No matter the competition or their ranking, Klinsmann would surely like to have the best team possible. Unfortunately, a suspension for Michael Bradley, an injury to John Brooks, and a health scare for Clint Dempsey will keep out three of the team’s most important players. Bradley is the captain. Brooks established himself as first choice starter with his performances at the Copa Centenario. Dempsey carried the team on the attacking end of the field. Though he’s in his mid-30s, Dempsey remains the driving goal-scoring force in the team.

Dempsey’s absence could shake things up from a formational standpoint. Jozy Altidore’s return to the team after missing the Copa Centenario is good news. However, it means that the combinations at forward will call for a different approach. Without Dempsey, the USMNT doesn’t have a player like Sebastian Giovinco, Altidore’s teammate at Toronto FC. The type that can drop in the midfield and serve as a creator and a goal scorer. What they do have is several other center forward options and players who can serve in wider areas if necessary.

That could mean Klinsmann shifts to a 4-3-3 despite the Americans generally looking more comfortable with a two-striker system. In the Copa Centenario, the USMNT used  Bobby Wood wide with Dempsey playing the central role. There is a bit of history in favor of Altidore and Wood playing together. The last time Altidore and Wood started was the Americans’ 6-1 thrashing of St Vincent and the Grenadines in St Louis last November. Wood opened the scoring. Altidore bagged two goals of his own.

Jurgen Klinsmann isn’t the type to play his hand with lineups too early. The USMNT coach did indicate this week that Kyle Beckerman, Geoff Cameron, and Altidore will start. Cameron will slot in at center back, as he did all six times during the Copa Centenario. What remains a mystery is who he will partner with. Brooks’s absence creates a hole that Steve Birnbaum could fill. Also in contention are Omar Gonzalez or Matt Besler. Klinsmann has shown trust in Besler in the past. He used Besler at both center back and fullback at the Copa. Gonzalez is the in-form choice. Birnbaum is the up-and-coming addition, and could get the nod for his mobility and game awareness.

The Americans are also missing Gyasi Zardes, a regular under Klinsmann. He does have a few wildcards in the mix. Sacha Kljestan’s addition to the team is intriguing. Klinsmann hasn’t often played with a clear creative “number 10”. That’s what Kljestan adds to the squad, playing at MVP-type levels for the New York Red Bulls. With Dempsey unavailable, Kljestan could be an answer.

There’s youth in the team as well. Christian Pulisic is on the trip. The versatile Kelyn Acosta of FC Dallas might solve the fullback problem, should he decide to push Fabian Johnson into the midfield. Paul Arriola and Rubin Rubin are just 21 and 20, respectively. Both have ample potential. Most of us already know about Jordan Morris and what he can do.

It could be simple this time, even if trips away in CONCACAF rarely are. If the United States maintains its focus and doesn’t let the hot and humid conditions impact their play, they shouldn’t have much trouble. Should they need the kind of guile that comes on the road in CONCACAF, it’s certainly there. Alejandro Bedoya, Beckerman, Gonzalez and others veterans of these trips. On Friday, getting through to the Hexagonal is all that matters.