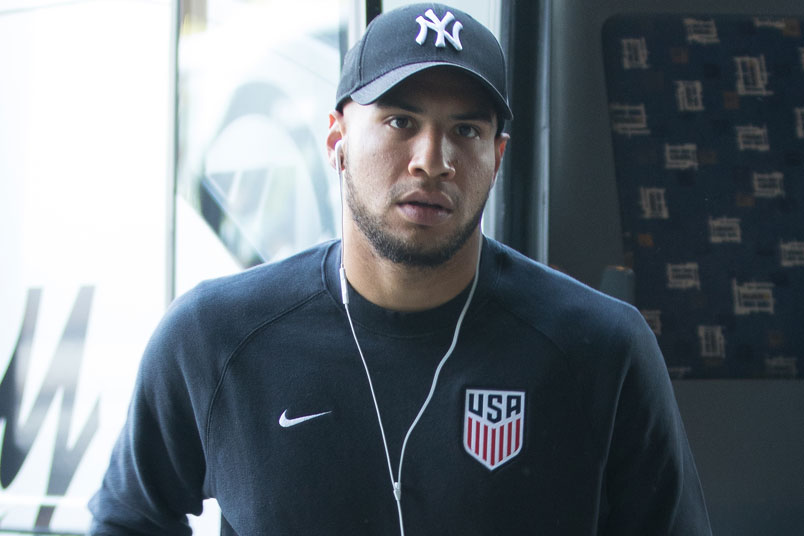 By Jason Davis – WASHINGTON, DC (Sep 21, 2016) US Soccer Players – American phenom Christian Pulisic took the field as a starter for Borussia Dortmund on Tuesday afternoon. It was Pulisic’s third consecutive start for the Bundesliga power. That’s an incredible achievement for any teenager, much less one that hails from central Pennsylvania. Though he came off at halftime, Pulisic’s growing profile in the Bundesliga is the lead in the story of a surge of American influence in one’s of the world’s best leagues.

The Bundesliga has long held a certain type of fascination on American shores, going all the way back to the late 70s. From 1976 through 1988, PBS aired an hour-long highlights show called “Soccer Made in Germany”. That brought West Germany’s top division to over-the-air television in the United States.

But German fussball lost out to the rise of the English game when the soccer broadcasting explosion happened in the late 90s and early 2000s. Whether because of a cultural or lingual barrier (or both), teams like Arsenal and Liverpool became the clubs of choice for many new American soccer fans. When NBC Sports scooped up the Premier League rights and took the competition mainstream, the Bundesliga played out in relative obscurity in the USA.

America’s relationship with German soccer does run deeper than a few past dalliances on television, however. Players from the States have made their way to Germany to ply their trade at a reasonable clip. Names like Caligiuri, Wynalda, Reyna, Hejduk, Berhalter, Bradley, Clark, Casey, and Cherundolo played in various divisions. While none of them managed top flight stardom of the transcendent type, American eyes did turn to Germany to watch their exploits in smallish numbers.

In 2016, the Bundesliga has a high profile national TV broadcaster (Fox Sports) and the benefit of being home to a talented group of American outfield players. So much of the USMNT’s best and brightest play in Germany, that the league stands to take a massive leap forward in its interest for soccer fans in the United States. With the language barrier hardly a concern thanks to English language coverage via top notch production and the internet providing numerous accessible resources for American fans, there’s little reason to treat the Bundesliga any differently than its English counterpart.

Pulisic is one of many American names who, by power of their name and background alone, can get their countrymen to pay attention to the Bundesliga. Just turning 18 years old, the Pennsylvania native is a significant part of coach Thomas Tuchel’s Borussia Dortmund side. Last week, Pulisic became the youngest Champions League player in Dortmund history. Saturday, at 17 years and 364 days of age, he scored once and assisted twice in a Dortmund romp over Darmstadt. No one, much less Pulisic himself, thinks he is an established star in a very talented team. As long as Tuchel shows trust in the young American, he’ll have the attention of a nation desperate for a breakthrough talent.

Pulisic os part of a range of USMNT players finding success in the Bundesliga. That includes America’s best defensive talent, John Brooks of Hertha Berlin, along with the USMNT’s best wing player, Fabian Johnson. Playing in the Champions League with Gladbach, Johnson consistently rates as one of the best performers on the field.

Striker Bobby Wood is making a name for himself with the USMNT thanks largely to the season he had with Union Berlin in the 2.Bundesliga last year. That earned him a move up to topflight club Hamburg.

That’s a long way of saying that never before have Americans had more reason to watch the Bundesliga. The timing is fortuitous, since plenty of observers will suggest German club soccer is the best the world has to offer. It’s typically fast, technical, and entertaining, and if more of this maturing soccer nation’s soccer converts are paying attention to it, they’re learning well. Young American players in search of idols can look in the direction of Germany and find several candidates of varying backgrounds. Germany’s doors are clearly open to American players. The next generation can dream of playing there without anyone telling them such a thing is next to impossible.

Can the Bundesliga become as important to American soccer fans as the Premier League? It seems like a lot to ask. Still, if there’s anything that can get Americans to pay attention and perhaps even throw their lot in with the German teams, it’s the combination of easy television access and Americans becoming stars.