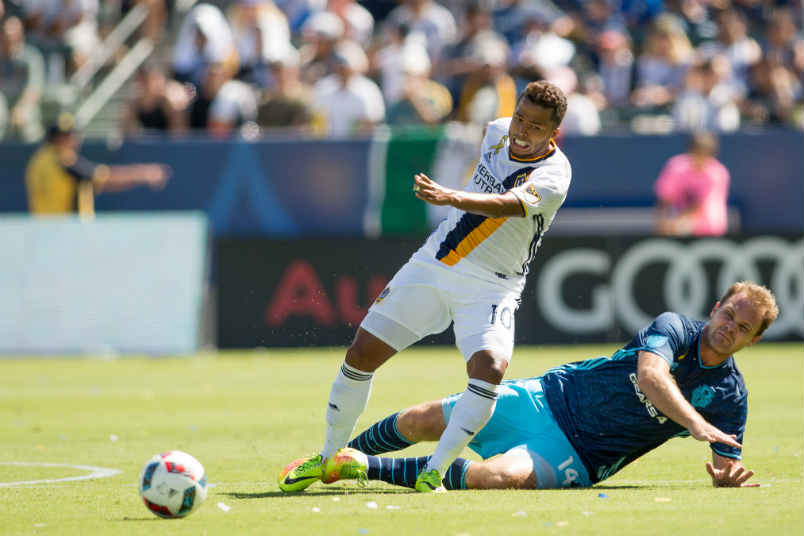 By Luis Bueno – RIVERSIDE, CA (Oct 12, 2016) US Soccer Players – It’s not that Gio dos Santos hasn’t shown the ability to play for Mexico or, for that matter, the LA Galaxy. He has scored important goals while defending both colors at one point or another. With his play for El Tri over the last two matches, though, dos Santos showed he is now ready to carry the load for both club and country.

It is necessary now for dos Santos to take the next step both in MLS and for El Tri in the upcoming Hexagonal. If this stretch of games does not inspire him to take this opportunity, then he may fall into the “unrealized potential” category for good.

Ever since his youth days with Barcelona, dos Santos has been all about potential. When Mexico won the U-17 World Cup in 2005, those hopes and dreams for him reached the next level. While he has been a fixture for Mexico in qualifying for and during the 2010 and 2014 World Cups, he has not been the star of the team. Players such as Javier “Chicharito” Hernandez and Andres Guardado have taken on that role. Dos Santos has fluctuated between a strong player or an average player with average performances.

In part because of his inability to latch onto any club for an extended period of time, the LA Galaxy pursued him a year ago. Acquiring dos Santos was a bit of a coup. Dos Santos though has shown some of the same characteristics with the Galaxy as he had for Mexico. At times, he is very good. At other times, it is easy to forget that he is even on the field.

That inconsistency must end now. The flashes of brilliance must become the norm.

Those statistics also are not proof that he is a dominant force in the league. Dos Santos is not mentioned among the favorites for the league’s Most Valuable Player award. The Galaxy’s play this season has been strong at times but poor at others. Goal scorers like the New York Red Bulls’ Bradley Wright-Phillips and NYCFC’s David Villa as well as playmakers like the Red Bulls’ Sacha Kljestan, FC Dallas’ Mauro Diaz, and Toronto FC’s Sebastian Giovinco are the ones leading the MVP charge.

Dos Santos should be in the same class as Giovinco and Diaz. Those two in particular have shown the ability to dominate matches and do so on a regular basis. Opponents know that to slow down Toronto FC and FC Dallas, the defense must key on Giovinco and Diaz. Seattle’s Nicolas Lodeiro is another player in that category. He’s been rather valuable for Seattle in his 10 matches there, scoring three goals and adding eight assists.

Certainly dos Santos has the technical ability to dominate, but the performances must reach the next level on a more consistent basis. Directly ahead of him is the challenge the remaining league schedule presents. The Galaxy will finish the season with games at Houston and home to FC Dallas. The club cannot finish in 2nd-place any more, but 3rd-place is there for the taking. Once in the playoffs, the Galaxy face the challenge to get back to the top and go on their self-titled “Race to Seis” chase, searching for a league-record sixth MLS Cup.

For country, Mexico open the Hexagonal with two difficult away matches, at the United States on November 11 and at Panama four days later. Mexico’s qualifying campaign in 2013 was a disaster. So has the second half of 2016. Fears of struggling through yet another qualifying campaign are not unfounded. Dos Santos can help squash those fears.

Dos Santos has the ability to carry both club and country over the next couple of months. If he fails to do so, his inconsistency will become the story of his career.