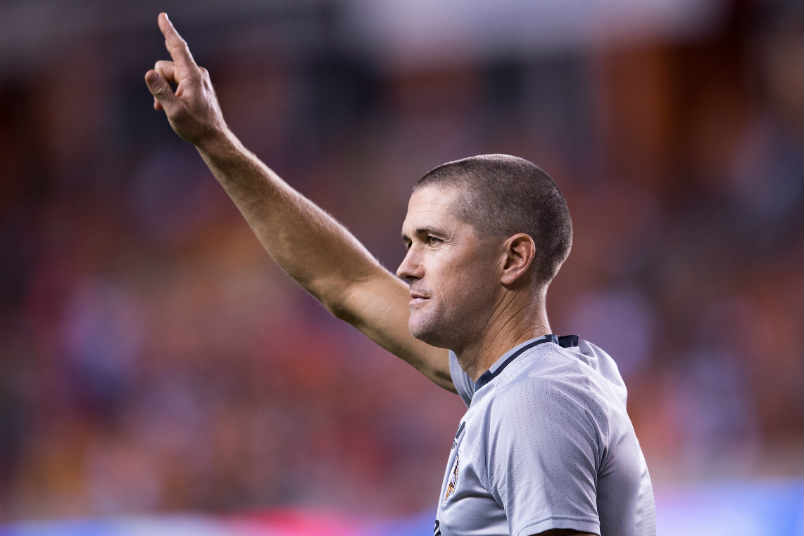 By Jason Davis – WASHINGTON, DC (Oct 28, 2016) US Soccer Players – The job of the interim head coach is a thankless one. If you’ve got that title, it means you replaced someone who did poorly enough to get fired or forced out. That usually means inheriting problems. Interim head coaches are not set up to succeed. If they can squeeze out any improvement at all, that’s something worth rewarding.

It’s against the backdrop of that stark reality that news of the Houston Dynamo choosing not to make interim head coach Wade Barrett the permanent choice dropped on Thursday morning. Barrett took over at the end of May for the departed Owen Coyle. That situation torpedoed the Dynamo season before it really even began. Barrett to took on the difficult job of changing Houston’s tactics and approach midseason.

In 20 matches, Barrett was 4-7-11 as a head coach. That record is decidedly mediocre. Still, plenty of MLS observers believed his leadership improved the Dynamo. At the very least, Barrett oversaw more disciplined, harder-to-beat teams than Coyle ever did in a year and a half on the job. That meant they weren’t nearly as entertaining as a product. On the field, they returned to the pragmatic Dynamo teams that made the playoffs year after year under Dominic Kinnear. What Barrett’s Dynamo showed were signs of becoming more competitive in the near future. Signs of hope.

Maybe the organization didn’t see 2016 as a lost cause when Coyle left Texas for a return to his old British stomping grounds and Barrett was left holding the bag. If Barrett failed to meet some undisclosed standard, however, the Dynamo organization failed to point to that as a reason for not handing him a chance at a full season. Instead, club president Chris Canetti identified Barrett’s lack of head coaching experience as a major factor in their decision to go with someone else.

“We need an experienced coach and we need to change,” Canetti told the Houston Chronicle’s Corey Roepken. “The status quo isn’t going to work. We feel like we need to infuse new thoughts, new ideas and new energy to take us to where we need to be.”

Barrett doesn’t count as a man with “new ideas” and “new energy”, but Wilmer Cabrera apparently does. The one-time Chivas USA boss spent 2016 as the head coach of Rio Grande Valley Toros FC, a USL club connected to the Dynamo. A Colombian with who never played in MLS, Cabrera has nonetheless been involved in American soccer in various capacities going back to 2005. His playing resume included 48 caps for Colombia during one of that country’s most successful periods.

With the hire of Cabrera, it certainly looks like the Dynamo are trying to tap into the same sort of ethos that has turned FC Dallas into not just a successful team, but a model organization. Fellow Colombian Oscar Pareja has created an exciting young team in Frisco, bringing his cultural background and penchant for trusting youth to bear on Major League Soccer to great success. Hiring Cabrera represents a break from the traditional Dynamo approach. Think of it as the Kinnear way. It’s an approach built on defensive pragmatism and direct attacking play. That continued under Coyle. Now, it’s a true change of direction.

The Dynamo coaching question got a quick answer. There are other teams around MLS who face tough decisions now that their seasons are ending.

Jeff Cassar of Real Salt Lake is out of contract after taking his team to a 6th-place finish and a loss in the knockout round of the Western Conference. Does owner Dell Loy Hansen stay the course with a young coach? Cassar’s links to the Kreis regime provide an element of continuity for RSL. If the team decides to move on from names like Beckerman and Morales, Cassar might also end up out in the name of change.

Jay Heaps is staying on the job in New England, despite the Revolution’s failure to make the playoffs. Ben Olsen’s DC United look good down the stretch of the season, but capitulated at home in a knockout round game against Montreal. Chicago just changed coaches ahead of 2016 and probably won’t do it again. Both Caleb Porter and Gregg Berhalter can count on the credit they earned reaching (and in Porter’s case, winning) an MLS Cup final in 2015.

Like Barrett, Brian Schmetzer took over mid-season and carries an interim tag in Seattle. He took his team into the playoffs and won in the knockout round. In his situation, the results will make it hard for Seattle to even consider anybody else. Looks like that interim tag will be coming off.