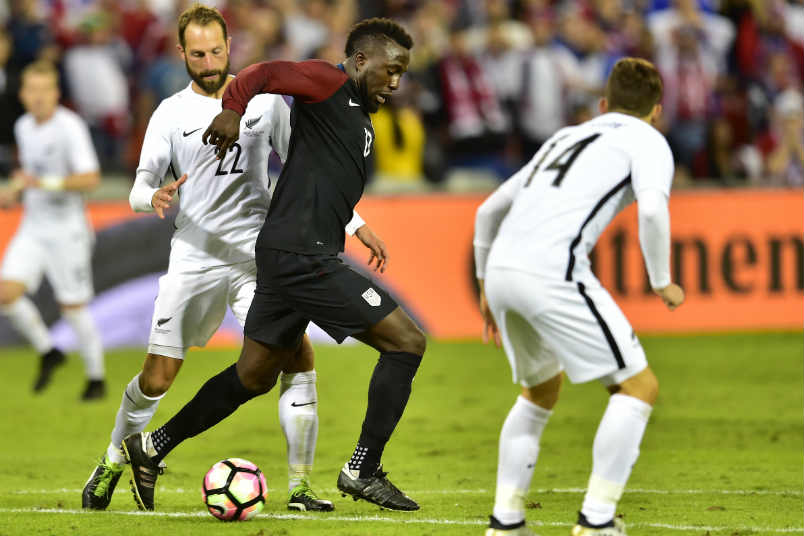 By Charles Boehm – WASHINGTON, DC (Oct 13, 2016) US Soccer Players – You could call it the yin and yang of American soccer tactics. Or theory vs praxis. Or perhaps you find “Jekyl and Hyde” a more apt tag.

4-4-2 vs 4-3-3. In broad terms, it’s a recurring fault line in our game. The hard-wired default handed down to us by our British colonizers vs the more intellectually appealing triangles of Dutch and Latino provenance. For many years and at many levels, from grassroots up to the national team, we’ve wrestled with the nuanced differences in roles, angles, and movements between them.

The USMNT spent a game in each shape during the just closed international window. Now we might see many thousands of words written about which system they’ll use in their next match, the Nov. 11 grudge match against Mexico in Columbus.

Last Friday in Cuba, Jurgen Klinsmann trotted out the no-frills 4-4-2 we’ve grown to known in recent months. Jozy Altidore and Bobby Wood partnered up top. Sacha Kljestan and Michael Bradley did the same in the middle. Then on Tuesday we saw a markedly different outlook against New Zealand in the nation’s capital.

Nominally a 4-2-3-1, in reality the US flashed a near-orthodox Ajax/Barcelona-style setup, bracketed by fleet-footed wide men DeAndre Yedlin and Julian Green hugging the touchlines. A central triangle of Bradley and Perry Kitchen behind Kljestan sought to win the midfield battle against the All Whites’ 3-5-2 shape. Altidore was asked to do the heavy lifting at the tip of the spear. Meanwhile, fullbacks Kellyn Acosta and Michael Orozco picked select moments to join the attack.

“The first half was certainly better than the second; maybe the first 60 minutes was better than the last 30,” Kljestan told USSoccerPlayers.com after the match. “But it was pretty good – we had different ways to move the triangle in order to try and expose them a little bit. Obviously the two guys behind me gave me a little bit more freedom to stay closer to Jozy to try to make a few plays, and in the first half we were able to create some good chances with good movement off the ball.”

Tuesday’s look was enough of a change that some, including Goal.com’s Ives Galarcep, even wondered if it was a feint by Klinsmann. Was it an extra wrinkle to throw off notoriously studious El Tri manager Juan Carlos Osorio?

Given both coaches’ tendency to tweak and surprise, however, next month’s clash at MAPFRE Stadium could unfold in any number of ways. Osorio, for what it’s worth, has pledged to take the game to the US. El Tri analysts generally seem to think he’ll do it with a 4-3-3, which is the Mexican standard much like the 4-4-2 is here. If those two defaults face off again, it forces the Yanks to solve the danger of being outnumbered in the middle of the park. That was a major factor in Mexico’s CONCACAF Cup triumph last year.

It would be hard to argue that Tuesday’s USMNT 4-3-3 worked dramatically better than the status quo. With calmer finishing here and there, that picture might look different, though. Both of this month’s matches were player showcases first and foremost, and have large asterisks attached to them in terms of personnel rotation, field conditions and more.

“It’s also good for us to be able to have the ability to change, to not just be a one-trick pony,” added Kljestan on Tuesday. “So I think it’s good that we have games like this that give us an idea and a sense of ways we can change things – either it’s on the fly or from the start of the game. I don’t prefer one lineup or one formation to the other. I think we can be successful because we have good soccer players on the field.”

Klinsmann is generally apathetic when it comes to detailed discussions on formations. His solution this fall could well turn out to be a hybrid of two or even three looks, with enterprise and width in some areas and caution in others. If pressed, even he would probably, eventually, concede that this particular choice of Xs and Os does matter.

On paper, the 4-3-3 and its derivatives solve more problems, from defensive coverage to the proliferation of triangles that foster combination play and quick movement. With the rise of rangy youngsters like Green, Christian Pulisic, and Lynden Gooch, the US have markedly more depth to choose from in wide positions than they did just a few months ago.

Yet several of Klinsmann’s most important players appear measurably more comfortable and confident with the familiar grooves of four in the midfield – and most especially, two up top. The coach wasn’t on some wild goose chase when he experimented with a three-man back line last year, even if it didn’t work out in the end. It was a logical route towards bolstering midfield numbers without giving up the twin-striker look.

The wider context of this conversation is striking for those of us who pay attention to the player development system. The US Soccer Development Academy and the Federation’s youth curriculum – heavily influenced by the exploits of Barcelona and Spain – are both fairly insistent that the 4-3-3 is the optimal shape for the technical and tactical education of young players. DA member clubs are more or less ordered to use this formation. That has rubbed more than a few veteran coaches the wrong way. The thinking is that more standardization across the system will lead to more consistency and quality in the players it churns out.

Much like our soccer nation as a whole, Klinsmann has wrestled with the question of philosophy vs reality in this sphere. In one manner of speaking, the 4-3-3 is the preferred canvas of the gourmet chef, while the 4-4-2 is what the dishwasher uses to roll up his sleeves and get the job done. American soccer still lives in the halting space between the two.