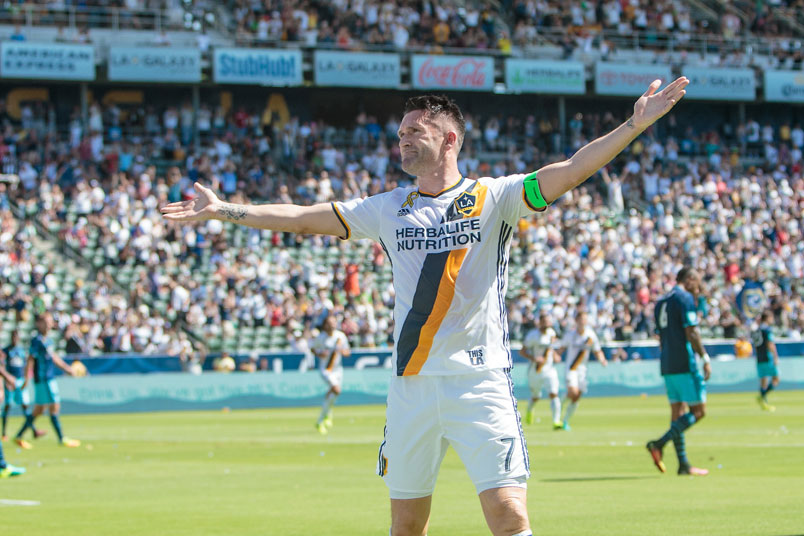 By Jason Davis – WASHINGTON, DC (Oct 5, 2016) US Soccer Players – Kevin Baxter’s article in the LA Times on the unique travel challenges of Major League Soccer is not exactly news. What it is, however, is a fresh look at an old issue. Namely, that for the entirety of the league’s existence, MLS teams have had to deal with a perception problem. The punch line was right there in the name, and it took exactly no time for people to notice. “Major League” means something different when it comes to topflight soccer. With travel, it means lining up to take a seat in coach.

It hardly needs saying that no other major professional sports league in America (or Canada) requires its teams to fly commercial anymore, much less coach. Pro sports is serious business. The athletes involved are finely tuned human beings who get every advantage to remain at peak condition. Beyond physical benefits, other professional sports know that having their famous players mingling with the general public on a four-and-half-hour flight from New York to Los Angeles is a bad idea for a host of other reasons.

Maybe MLS doesn’t yet have an issue with famous soccer players causing a commotion on a flight. That’s not exactly a plus for the league. Look at it like this. The image of a group of 30-plus people traveling via domestic carrier to play a game that will be on national television and sold as “major league” should include how those teams get there. Largely because of the wealth and importance of the NFL, NBA, NHL, and Major League Baseball, the public associates professional sports teams with private travel. You would no more expect LeBron James and his Cavaliers teammates to be on your flight from San Francisco to Cleveland than you would Santa Claus and his elves.

Which means MLS looks very bad by comparison. There’s no humble brag out of this one. No “they’re just like us”. The league already deals with a perception problem via its (relatively) paltry salaries. Modern professional athletes in American make a lot a money… unless they play in MLS. Throwing rinky dink travel on top of that does the league no favors in the battle for respect among American sports fans.

Arena has gone so far as to ask his players not to wear Galaxy gear in airports. That’s the level of embarrassment MLS teams face when traveling. After making so much progress with the professionalism of America’s top soccer competition, it’s ridiculous to see teams still dealing with these issues 20 years on from the birth of the league.

MLS has largely done away with the garish and distracting gridiron lines that marked so many games for so many years. A decade-plus of stadium building has put the league in a position to present its product appropriately, with integrity. There are reasons for the exceptions now.

Though still distressingly low at the bottom end, MLS has largely moved on from the era that saw many of its players forced to room three and four to an apartment and taking side jobs during the season. The “charming” stories of players like Alan Gordon speeding from Galaxy training to his gig coaching a high school girls team – as related by Grant Wahl in “The Beckham Experiment” – are no more. That’s a good thing, because it means players can focus on being the best soccer players possible. The league looks better for it.

There are state-of-the-art training facilities these days. Academies, fully operational, are turning out young players who have never wanted for excellent conditions in which to grow. When viewed from the outside, most MLS franchises very much have the look of properly built-out clubs, the likes of which you would find in any mature soccer nation.

All of that progress, and travel restrictions still remain an albatross weighing down MLS teams. It’s a hindrance to the league taking the last few steps into the big time of American sports.

The argument made by MLS against charter flights – that they would wreck the competitive balance of the League – is ridiculous to the point of seeming dishonest. MLS commissioner Don Garber’s claim that the league faces an either-or proposition between charter flights and academy investment is silly. Suppose it’s somewhat true based on available funds, it still rings like the commissioner covering for a few holdout owners who don’t want to pay for their teams to travel like serious outfits.

In fairness, the numbers are not small. It’s admittedly easy to spend other people’s money. MLS, however, wants it both ways. To be a big time sports league in the big event culture of North American while at the same time cutting corners on things like air travel.

Baxter’s piece again shines a light on that hypocrisy. For the good of its players, both physically and psychologically, it’s time for MLS to stop making excuses. Stop protecting the more inane nods to parity. Let teams that want to stretch their legs in the roomie first class seating of chartered airplanes do it. All it means is accepting the minimums of being a major league sport.