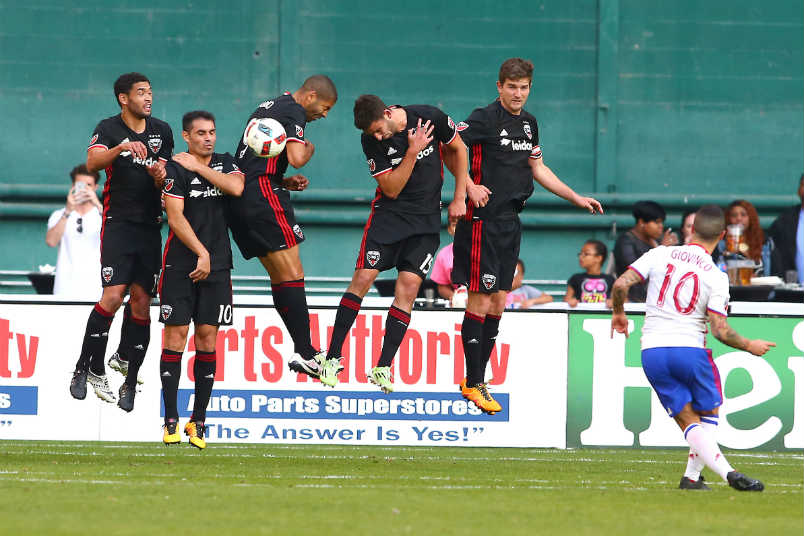 By Jason Davis – WASHINGTON, DC (Oct 14, 2016) US Soccer Players – You know things are serious when Major League Soccer is turning to simultaneous kickoffs. Sunday has five Eastern Conference games in the early slot followed by – you guessed it – five from the West. It’s a full on battle for clubs trying to not only make the playoffs, but avoid the play-in round. We don’t even need to wait for the final week of the season to witness clubs and players operating under intense pressure.

The Eastern Conference is unlikely to produce the Supporters’ Shield winner for 2016. There’s still a three-team race for the top two seeds should provide plenty of drama. At the top of the standings, the Red Bulls and NYCFC have 51 points while Toronto FC lurks in third with 49.

The pressure is highest on the Reds. A five-game winless streak has them trying to avoid the play-in round. A home playoff game would be nice. The memory of last season’s early exit to Montreal still lingers. Still, this is a team at or near the top of the East for most of the season. Falling off late is tough on the fans. Money spent and unmet expectations demand a conference semifinal appearance.

It’s almost fitting that Toronto’s quest for a high playoff seed involves a game against the Impact. Montreal will feel the pressure themselves. A point means the playoffs, but that’s likely to happen anyway. What they would like is a final game scenario to move past Toronto.

Seb Giovinco is back for Toronto. He needs to show his injury layoff isn’t a problem. Following his MVP season, the next step is to lead Toronto deep into the postseason.

No matter what, Toronto will take part in playoff soccer in 2016. We don’t know if the same will be true of the New England Revolution, who sit just below the red line in seventh place. To keep themselves alive for the final weekend, they have to beat Chicago on the road in Bridgeview. The Fire are already eliminated and have nothing to play for. Veljko Paunovic’s team has a spoiler’s mentality. Players know they’re fighting for jobs on next year’s roster. Chicago drew 2-2 with Columbus on Thursday, eliminating the Crew SC from playoff contention. Don’t expect them to roll over for the Revolution.

The Western picture is even more fraught with tension. No club faces a more pressure-packed run to the finish line than the Seattle Sounders. Their turnaround isn’t done. The Sounders have never missed the playoffs, and this trying season can’t be the exception.

Through injuries, firing coach Sigi Schmid, and the loss of Clint Dempsey for the season due to a worrying heart ailment, Seattle held on. A win midweek at home against Houston would have sealed the deal. Instead, the Sounders couldn’t find a goal and settled for a draw. They’ve got FC Dallas on the road on Sunday. Dallas rarely loses at Toyota Park. Seattle misses midfielder Osvaldo Alonso thorugh suspension. Alonso’s out-of-character red card against Houston for putting his hand in Will Bruin’s face could have massive implications for Seattle. That could create a final game scenario for a team that’s had enough tough moments in 2016.

The Galaxy faces pressure to lock down a home game in the West as they visit the Dynamo. LA won’t have Steven Gerrard, who flew back to his native England to receive treatment for a muscle strain this week. Whether Gerrard is crucial to the club’s chances of getting points on the road in Texas or not, Gerrard’s ocean-hopping act creates an unwanted distraction for Bruce Arena and his team.

Because pressure is relative, the Colorado Rapids at least deserve a mention heading into the weekend. Already enjoying a remarkable turnaround season under surefire MLS Coach of the Year Pablo Mastroeni, the Rapids hold the fate of the Supporters’ Shield in their hands with two games to go. Colorado downed San Jose on Thursday night 2-1 to put themselves in position to go for the top playoff seed in the last two weeks. The next step on that journey leads them to Portland to face the desperate Timbers on Sunday afternoon.

There’s plenty of pressure to go around. The last two weeks of the MLS season will divvy it out as necessary. Who will handle it, and who will crumble beneath the weight?