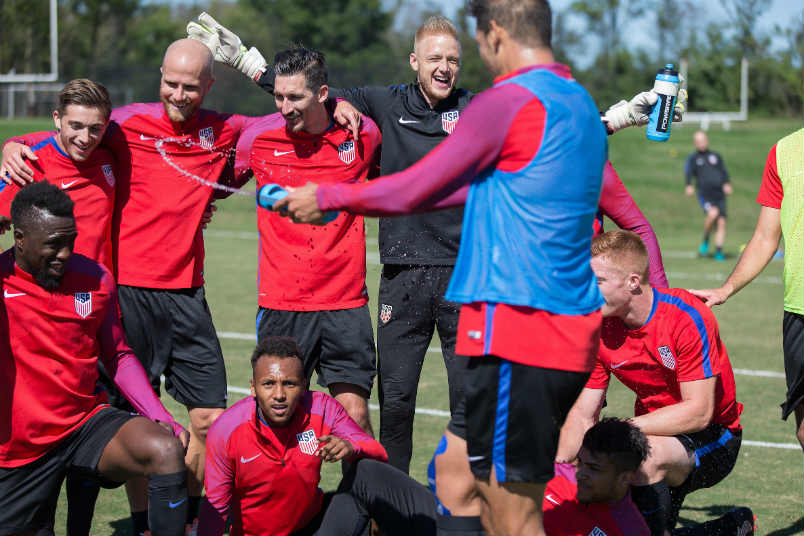 It’s the second October friendly for the USMNT, this time at home against New Zealand in Washington DC (8pm ET – ESPN). RFK Stadium is a familiar location for the USMNT, with a good chance to finish out the international window with back-to-back wins. It’s also an opportunity for players to test coach Jurgen Klinsmann, who previewed this window with a focus on opportunities in games that count.

By design, Klinsmann will have to reset his starting eleven and his substitution pattern. Following the 2-0 win over Cuba, Klinsmann swapped out players. That included the heart of the order for what we think of as the USMNT. Most of the Bundesliga players returned to their clubs. So did goal scorer Chris Wondolowski and Seattle rookie Jordan Morris. Replacing them are several players looking for a chance at cracking the World Cup qualifying lineup. That includes Terrence Boyd, looking to revive his career for club and country after a lengthy recovery from injury.

Klinsmann’s comments loom over the October friendlies. The coach keeps repeating that this is an opportunity, but we won’t know how much of one until next month at the earliest. It’s hard to see Klinsmann taking risks when the Hexagonal round of CONCACAF World Cup qualifying opens at home to Mexico. “When it comes to roster spots for November, the fight is on,” Klinsmann said in the press release announcing the roster changes. Fair enough, but how much does it take to turn a roster choice into a tough decision for the coach?

New Zealand gave Mexico a game, losing 2-1 in Nashville. Unfortunately for easy comparisons, Mexico coach Juan Carlos Osorio is also testing the extremes of his roster. That Gio dos Santos wore the captain’s armband and scored is nice, but it’s no guarantee that Osorio is going back on previous decisions. He’s not the only El Tri coach that decided dos Santos’s international career had slowed down, if not ended altogether. What a Saturday night in Nashville means for Osorio is as important as what dos Santos did on the field. In other words, Mexico didn’t field the kind of lineup that would be helpful for the USMNT. Then again, the USMNT won’t be fielding the kind of lineup against New Zealand to make those kinds of comparisons valuable.

Cuba and New Zealand aren’t fooling anybody. The World Cup qualifying elsewhere in world soccer this month meant less choices for the USMNT. Costa Rica ended up getting the toughest friendly, but it meant traveling to play 2018 World Cup hosts Russia. Costa Rica did the job in Krasnodar, winning 4-3. The problem is that there wasn’t anybody else to schedule against in Europe, meaning a lengthy trip for a single game. This isn’t going to get any easier for CONCACAF as a whole. UEFA will start its Nations League following the 2018 World Cup, a way to limit friendly dates for its countries. The ability to find challenging opponents outside of North and Central America could become a major problem. Canada ended up going to Marrakech, playing a neutral site friendly against Mauritania in advance of Tuesday’s game against the host nation. That Mauritiania game drew an announced crowd of 200 in what looked like an empty stadium. It’s no surprise that Canada isn’t a draw without the home team at the Grand Stade de Marrakech, but it is another example of how tough things got for CONCACAF scheduling games this month.

Let’s take Klinsmann at his word and all positions in his lineup are at risk for disruption prior to announcing his November squad. Has anything changed during the 90 minutes against Cuba? Will anything change over the 90 minutes against New Zealand? It’s doubtful, moving the focus to what we don’t see enough of to draw meaningful conclusions. That’s what is happening in camp. Still, there’s enough to suggest that creative squad selection won’t come out of nowhere. As it stands, it’s hard to believe that Klinsmann will set aside his regular choices for new faces against Mexico. That game, a ridiculous reward for winning the group, looms in a way that only USMNT vs Mexico can in CONCACAF.