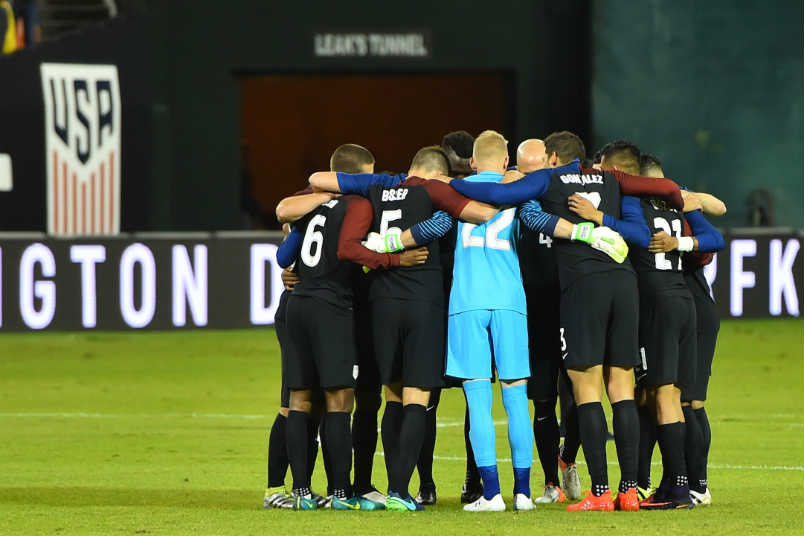 By Jason Davis – WASHINGTON, DC (Oct 12, 2016) US Soccer Players – The Hex might be just a month away, but it’s tough to tell from the level of intensity around the USMNT. The October friendlies started with a low key 2-0 win over Cuba. That was a game of questionable value in Havana on Friday night. On Tuesday, Jurgen Klinsmann’s side ambled around the field at RFK Stadium for 90 minutes. They settled for a 1-1 draw against New Zealand.

At least give credit to the just over 9,000 fans who showed up to support the home side. They made a lot of noise at RFK. Baseball might have taken the gloss off of a friendly in DC. Still, the USMNT hasn’t drawn well for friendlies in some time. Make of that what you want.

There are good reasons for excitement surrounding the USMNT right now. Christian Pulisic, Lynden Gooch, and Julian Green put the focus on a young group of players. That said, there’s the feeling that this might be part of the problem. The team seems stuck between generations and approaches.

Given the roster shakeup between the friendlies, takeaways are difficult. New Zealand was the tougher team, but they got the weaker USMNT lineup. With some of core still available, Klinsmann’s choices created more questions. Kellyn Acosta was again asked to play left back, a position he rarely fills for his club team. Michael Orozco slotted in at right back with DeAndre Yedlin higher up the field. Sacha Kljestan pushed up in midfield ahead of Michael Bradley and Perry Kitchen. With Julian Green deployed as a right winger, Jozy Altidore played as a lone striker.

From the outset, very little worked. The midfield struggled to hold possession. Kitchen and Bradley spending much of the first half working out who should be closing on the ball and who should be facilitating movement upfield. Even when the duo started to find the game behind Sacha Kljestan’s keen passing eye, the American flanks labored to create the space necessary to take advantage.

Julian Green’s strike to open the scoring wasn’t completely undeserved for either the player or the team. It didn’t too much to convince those on hand that the Americans had a grasp on how to make Klinsmann’s 4-3-3 work. The 21-year old Bayern Munich winger responded to the call from his coach to go at defenders and make things happen 1-v-1. He got the benefit of bad defending, but Green did his job.

Green is a positive Drawing with New Zealand isn’t. The result hinged on the USMNT giving up an equalizer that shouldn’t have happened. Shoddy set piece marking and a goalkeeper gaff and we’re talking about problems instead of answers.

Klinsmann did not hesitate to heap praise on Green. He was reportedly a dynamo in training and showed enough to the public in two games to demand more playing time. Green’s November might be one of the easy calls for the coach to make. So will creating the kind of setup that will use Kljestan to his fullest. Kljestan’s MLS and now National Team revivial is something else. It’s worth cuasing Klinsmann a few tactical headaches. Kljestan makes the USMNT better, but only if he’s given a chance to roam beneath the forward line. That requires defensive cover. The 4-3-3 Klinsmann employed against New Zealand provided Kljestan with the room to find the ball and the game. There’s a cost, of course. It also cuts down on Jozy Altidore’s effectiveness.

Against New Zealand, Altidore was little more than a target deployed to provide second balls to streaking wingers and the advanced Kljestan. If the Americans can live with his goalscoring talents taking a backseat to those contributions, than Kljestan has a clear place in the team. If they can’t, Klinsmann has something to consider. Namely, figuring out a partner for Altidore without sacrificing that defensive cover.

Tuesday’s affair at RFK Stadium didn’t offer much in terms of fan engagement. Despite a physical element (more of function of style than energy) it didn’t offer much intensity on the field. With the roster turnover and the formation switch, it also didn’t give much new information to Klinsmann and his staff, at least from a tactical standpoint.

What it did do was give Green his opportunity to impress. It also gave some minutes to Lynde Gooch, winning his first cap at senior level. Gooch did what all subs should. He gave the team a spark, bringing them back to life after a dreary period. The game also offered a late feel good moment. Terrence Boyd got playing time after two years mostly lost to injury.

That said, with the Hex just a month away, it doesn’t feel like enough. Then again, maybe nothing would.