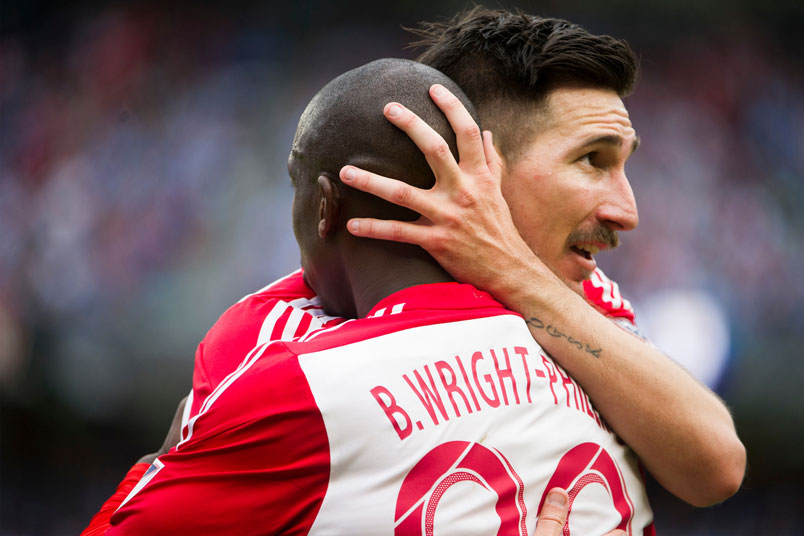 By Jason Davis – WASHINGTON, DC (Oct 7, 2016) US Soccer Players – Speaking on the radio on Friday, Dax McCarty got it. He knows that it’s going to be tough for his team, the New York Red Bulls, to claim at least one of the trophies still available in the 2016 Major League Soccer season. The Red Bulls are still in contention for the Supporters’ Shield, at least mathematically. They’ve already advanced to the playoffs.

Then there are the player awards. Though those trophies go to individuals, their teams can rightfully claim some part of the achievement. Soccer is a team sport. No one can score goals or look great on defense without the support of his teammates. The MVP award is a perfect example. No one in this game will put together a good enough campaign to win the league’s top solo honor alone. It takes good passing, good service, and teamwork by those around him.

McCarty plays with two of the top MVP candidates. It’s an odd situation for the Red Bulls, since Sacha Kljestan and Bradley Wright-Phillips are bound to split votes. The MVP, almost without fail, goes to the player voters believe has the most impressive stat line. It’s much easier to vote for the man with the most goals or the most assists than it is to go digging into the more esoteric stats or depend on subjective appreciation of non-attacking players.

Both Kljestan and Wright-Phillips have incredibly impressive stat lines. Despite not scoring in his first seven games this season, Wright-Phillips is in a tie for the league lead in scoring with David Villa of New York City FC. That works out to 21 goals in 30 games, with an excellent return of 10 goals in 11 games since the start of August, when the race for playoff places and positioning heats up in. In other words, Wright-Phillips has been great when it matters most.

Kljestan leads the league in assists, whether measured by the MLS standard (which includes hockey-style “secondary” assists) or the traditional first assist. His creative influence in the middle of the Red Bulls lineup has been a crucial part of getting the club into 1st-place in the Eastern Conference. He’s also scored six goals of his own to help the cause. Six of his assists have been on game-winning goals.

Wright-Phillips and Kljestan can thank each other for a much of their success this season. No two players have combined more times for goals, with Kljestan setting up Wright-Phillips teammate six times this year. Again, the stat lines that win MVPs require a supporting cast. However, it’s rare for two teammates to be this dependent and both end up MVP contenders.

When voters go to pick the league’s MVP this season, they’ll find themselves torn over the choice between Red Bulls. As McCarty said on the radio on Friday, that’s okay with him. It feeds into the spirit of this team. What it means practically is that the league’s other prominent candidate is likely to walk away with the reward.

That candidate is NYCFC’s David Villa. Villa and Wright-Phillips have 21 goals. Because his club is a second-year expansion franchise, Villa is getting ample praise for helping them not only make the playoffs, but challenge for first overall in the Eastern Conference. Head coach Patrick Vieira deserves credit for re-forming a talented, but disorganized roster into a winner. Players like Frank Lampard, Andoni Iraola, and Tommy McNamara have played key roles. All credit to them, but it’s Villa standing out as the driving force.

Villa relies on service from his teammates just like Wright-Phillips. Probably due to his resume, Villa gets the bulk of the credit for NYCFC’s success. Meanwhile, the Red Bulls striker doesn’t get the same focus or credit. That’s not really fair to Wright-Phillips as it pertains to the MVP voting, of course.

There are other candidates beyond the New York metropolitan area for the MVP award. Sebastian Giovinco’s injury stopped him in his tracks before September began. The reigning MVP still has more goals and assists combined than anyone in the league. Gio dos Santos went through a quiet period for the Galaxy before turning it on during the second half of the year and now has impressive totals in both goals (14) and assists (12). Mauro Diaz’s numbers aren’t overwhelming, but the Argentine playmaker pulls the strings for the best team in MLS. He deserves to be in the conversation.

But the vote is likely to turn on whether one of the Red Bulls can gather enough support to overcome Villa and his gaudy goal total in the spotlight for NYCFC. Supporters of Wright-Phillips will point out that he hasn’t padded his goal total with penalties (Villa has scored four times from the spot), and his five assists (Villa has three). Supporters of Kljestan can make a big deal out of not just his assists, but the numerous times throughout the year that the midfielder set up a chance that his team didn’t finish.