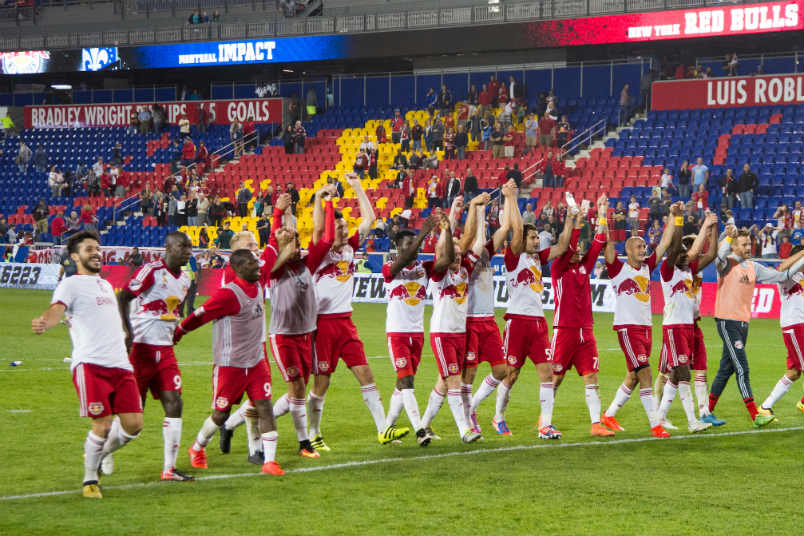 By Clemente Lisi – HARRISON, NJ (Oct 17, 2016) US Soccer Players –We go through this every autumn. The New York Red Bulls have a great regular season. They field a team loaded with stars and overachieving players. They spin out of control and crash out during the playoffs. That pretty much sums out the Red Bulls over the past decade. Talk of curses aside, the MLS postseason is a beast the Red Bulls have been unable to tame.

If you feel like you’ve read this before it’s because you have. This team has been annual underachievers since the league’s inaugural season. The NY/NJ MetroStars turned Red Bulls have never won an MLS Cup. The only appearance in the final was in 2008. A ridiculous run through the playoffs ended at the feet of the Columbus Crew.

What’s the reason for the playoff heartbreak? One theory is the Red Bulls are a team built so it can battle the highs and lows of a long, drawn out regular season. Short turnarounds and bracket-style elimination situation brings nothing but disappointment. In order to be MLS champion, a team has to be able to handle both scenarios. Clearly, the Red Bulls are not there yet.

“I don’t think there is any question that this team has the ability to win MLS Cup this year. If you look at the starting eleven, the roster through 18 players and (Red Bulls coach) Jesse Marsch and his staff in charge, I don’t see a better club in Major League Soccer,” said Red Bulls color commentator Shep Messing. “The team has shown the ability to play with high pressure and adapt when it’s necessary to absorb pressure. Their ability and creativity on set pieces is second to none in MLS. Equally impressive, is the quality of their depth on the bench. Their Designated Player, Gonzolo Veron cannot find a way to crack the starting lineup. At some point in every playoff run it will take a special player to make a special play to win a game.”

Despite that optimism, MetroStars/Red Bulls history is full of disappointment. Last season’s playoff flop was the way the Red Bulls crashed out of the Eastern Conference Finals against their old friends the Crew. New York conceded a goal nine seconds into the first game and never recovered. The hangover from that elimination lasted through the start of this season. New York won only one game out of its first seven. A summer unbeaten streak – including a franchise-record 10 matches – propelled the Red Bulls into playoff contention.

In the last home game of the season on Sunday, the Red Bulls defeated the Crew 3-2. It wasn’t easy. They came close to giving up a 3-0 lead. Unfortunately for New York, that wasn’t much of a surprise. They could advance as Eastern Conference champions and still seem like an underdog in the playoffs. There’s too much history for it not to be the case. Many of the same players involved in the meltdown of the past few seasons are on this team as well.

There’s no doubt Marsch and his players appear confident headed into the postseason. Bradley Wright-Phillips and Sacha Klejstan have had standout seasons. Both are currently in the conversation for this year’s league MVP award. The midfield – comprised of McCarty, Klejstan, Felipe and Mike Grella – have been phenomenal and the acquisition of towering defender Aurelien Collin from Orlando City SC helped shore up what had been a leaky backline. This much talent doesn’t mean the Red Bulls will excel in the playoffs. It also doesn’t mean the team can overcome any sort of issues it may face over two legs in any given playoff series.

“Things get so magnified in a playoff format – so the first goal, emotional control, decision-making all can be so important to the narrative to how things will play out,” said Glenn Davis, host of the weekly radio show “Soccer Matters” on ESPN. “Fate and good fortune, along with how you enter the playoffs injury wise, are telling. Managers must be able to get through to their players. They literally must reboot them to a second season even after winning a Supporters’ Shield.”

Sports fans being superstitious, the Red Bulls are still dealing with the well-documented “Curse of Caricola”. The MetroStars lost their first-ever home game at Giants Stadium when defender Nicola Caricola put the ball into his own net for a 1-0 loss to the New England Revolution. In 2013, the team won the Supporters’ Shield. Some claimed that ended any curse. The playoffs suggest otherwise.

“I don’t believe in bad luck or curses. But when I was a player I believed that players win championships. I now believe that it’s the organizations that win championships,” said Messing. “In the history of this club, they have had at various times both (coaches) Bruce Arena and Bob Bradley in charge. The temptation to blow it up and start over, rather than stay the course, has haunted them for 20 years. The 1½ years that has had Mark De Grandpre, Ali Curtis, and Jesse Marsch in charge has been spectacular. If allowed to grow together, there should be multiple championships in their future.”

Whatever happens in 2016, there are already built-in and easy excuses. The Red Bulls need to break the expectation that no matter what they do during the season, they’ll lose in the playoffs.

“I think we have now set ourselves up with the two years that this group has been together… that we’ve learned a lot, we’ve been through adverse situations, and we’ve come out on the topside many, many moments,” said Marsch. “We’ve played more big games than any team in the league between rivalries with New York City, Philadelphia, DC, New England. You go down the list and it feels like every week we’re in a big game and that’s made us stronger and it’s made us better and it’s prepared us for where we’re going to go.”