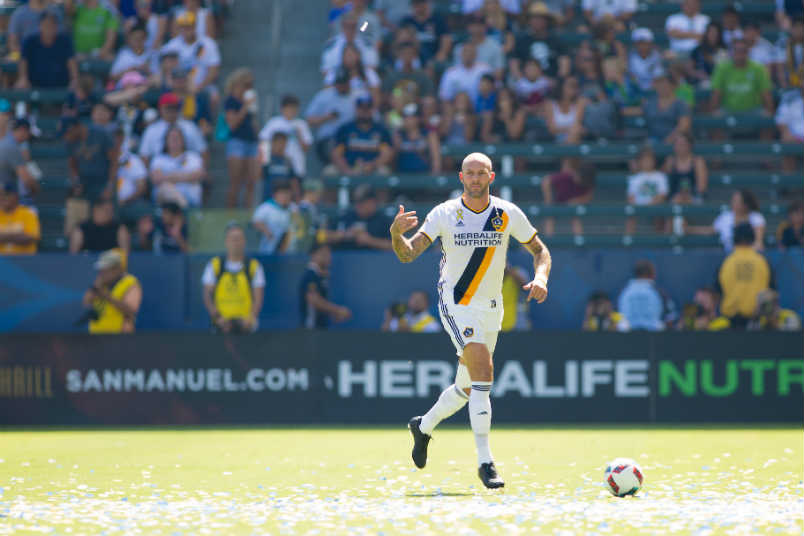 By Luis Bueno – RIVERSIDE, CA (Oct 26, 2016) US Soccer Players – It used to be that come playoff time the LA Galaxy was the team nobody wanted to play. A match up against the Galaxy meant facing a team capable of great things. Playing the Galaxy in the first round of the playoffs meant an early exit. In the later rounds, it meant a monumental battle was at hand. From 2009 through 2014, the Galaxy was the team to avoid.

But entering the 2016 MLS playoffs, the Galaxy is just another team. With limited star power, the team’s hallmark in their glory years, and more questions than any of the current roster can answer, this year’s Galaxy team is not on a path to the championship. Instead, they’re continuing along a meandering road to nowhere.

The Galaxy will meet Real Salt Lake in a one-off playoff match on Thursday. A win and the club gets a two-game series against the Colorado Rapids. It is certainly possible the Galaxy gets past RSL. Aside from perhaps Montreal and Philadelphia in the East, Salt Lake has the least amount of momentum entering the playoffs.

Momentum for the Galaxy is its own issue. They’re certainly not coming into the 2016 playoffs like a freight train. In the last five games, the Galaxy recorded one victory. That was an ugly 1-0 win at Houston on October 16. They’ve won just three times since July 23, a span of 14 games. By contrast, Colorado won three times in October alone. The Supporters’ Shield winners FC Dallas have lost just three times since June. Eastern Conference frontrunners the New York Red Bulls carry a 16-match unbeaten run into the postseason.

The Galaxy looked to be surging in July as the club won four consecutive matches. Since then the team has been inconsistent. The Galaxy scored 13 goals in five games in September but has just one in three games this month. The attack seems out of ideas.

Injuries have played a role. Robbie Keane has not played in the last two games and appeared in just 17 games this season. That’s his fewest since joining the Galaxy. Steven Gerrard last played 90 minutes on August 20 and played in 21 games overall. That’s two Designated Players carrying nearly $10 million in salary that aren’t contributing.

The stars carried the day when the Galaxy was winning MLS Cups. Landon Donovan and David Beckham came through in the postseason time and time again. In winning three MLS Cups in 2011, 2012 and 2014, three different players won the MLS Cup Most Valuable Player award. Donovan in 2011, Omar Gonzalez in 2012, and Robbie Keane in 2014. Those teams had balance. Different players could and did rise to the challenge.

This year’s team has a few players who are capable of carrying the team through tough moments. Gio dos Santos is the closest the club has to a league Most Valuable Player candidate, with 13 goals and 12 assists. Defender Jelle Van Damme adds toughness and grit to the backline and has been the team’s most consistent performer this year.

From there, the drop off is noticeable.. Donovan so far has been a shadow of his former greatness. That’s no surprise after spending 18 months in retirement. Keane and Gerrard both carry injuries. Gyasi Zardes is gone for the season.

It doesn’t take much insight to see the Galaxy stumbling sooner than later. This isn’t their season, something that’s seemed obvious over the last couple of months. Like trying to draw out water from rocks, this year’s playoff march seems futile.

What will a playoff exit mean? If nothing else, it’s the realization that this isn’t how to build in MLS. An overhaul would seem the appropriate response. The club’s current era of mediocrity demands as much.