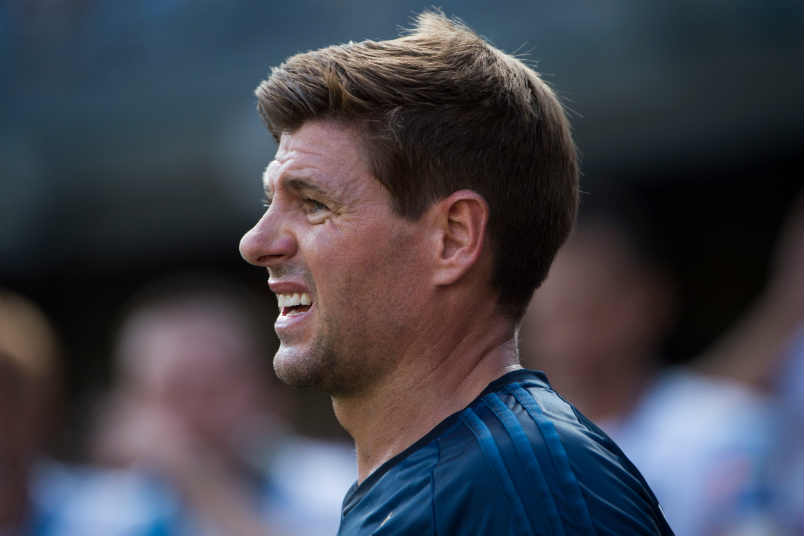 By Luis Bueno – RIVERSIDE, CA (Oct 19, 2016) US Soccer Players – Heading into the final game of the regular season, the LA Galaxy knows its path to MLS Cup. They’re home for one match. Get past that, and another match-up against Sunday’s rivals, FC Dallas, is all but a given.

What the club can’t know, and won’t know until it’s too late, is how the season will come to a crashing halt or how to fix it afterward. This Galaxy team is in need of a change or two, none greater than addressing their Steven Gerrard situation.

Gerrard has repeatedly flirted with the notion of retirement, which would be great for both sides. Gerrard joined the Galaxy during the summer of 2015 on an 18-month contract, which means he has a few months remaining on the deal. His play on the field has not warranted a new offer nor has his health given the club any reason to think he can maintain or improve at the age of 36.

The Galaxy looks like they’re thinking of a future without Gerrard, hopefully learning a valuable lesson in the process. The club brought Gerrard in with David Beckham in mind. The two were seemingly made from the same mold. English midfielders who spent significant time in the Premier League as well as the English National Team. Players who had won the Champions League, played at World Cups, and European Championships. Players who would draw attention on this side of the pond and would serve as influences on and off the field. The difference is in Beckham’s Q rating outside of what he did on the field, but the Galaxy certainly knew that.

On the field, it’s not a continuation of that story with Gerrard. It’s not just that he hasn’t had the success Beckham eventually found in MLS. What Gerrard does have in common with Beckham is injuries keeping him out of games.

A week ago, Gerrard was rehabilitating a hamstring injury in Liverpool. He received permission from the team to travel back home to visit his family. While there, Gerrard spent time at his former club’s training facility. That raised questions as the team did not announce the move prior to Gerrard making the trip. In other words, it turned into a distraction.

The Galaxy cannot do this anymore. The club cannot ask fans to deal with absent stars. Beckham was gone quite a bit. Players dealt with it because they knew what Beckham did on the field. That part was not in question. Gerrard hasn’t played enough games to get there.

Again, part of this is financial. If Gerrard was pulling in $200k per year, this wouldn’t be an issue. When he commands the third-highest salary in the league, that’s different. It speaks to the club as a whole.

In fairness to Gerrard, the Galaxy pursued him. They knew full well what a difference a former Premier League star can make. They liked the idea of Gerrard leaving the only club he’d ever represented as a pro for the most ambitious club in MLS. That’s the Galaxy writ large, but it’s also thinking that hasn’t stayed current with this league.

The days of bringing in English stars should be over. Unfortunately, the club’s own philosophy counters that thinking. The Galaxy needs stars on its roster. That means forking out millions on players who are big names and have played for big clubs. Gerrard and Robbie Keane are likely done as Designated Players but that simply means other aging stars are on their way.

Keane more than fulfilled his contract and his loss would be tough. It’s a different situation for Gerrard, but he still has the luxury of time to change it.

There’s a path to redemption for Gerrard in MLS, assuming he’s healthy enough to play. He helps guide the Galaxy to the 2016 MLS Cup. That starts in the knockout round where the Galaxy need to wait on their eventual opponent. Colorado is the likely team waiting on them in the conference semifinals. For a team like LA, that’s when the playoffs really start. If things fall as expected, getting past the Rapids means facing FC Dallas.

If Gerrard is the one making the difference for the Galaxy, it will be easy to forget any complaints about a late season trip home. That salary will be money spent towards a league title. That’s the point, after all. The influence of a designated player only increases with an MLS Cup.

Anything less, and it’s a reminder of why the Gerrard era in LA hasn’t been that great. Word choice is important here. It’s not just Gerrard, it’s what he represents for the Galaxy moving forward. It’s that mindset that what worked once will work again. It won’t, not in this version of MLS.