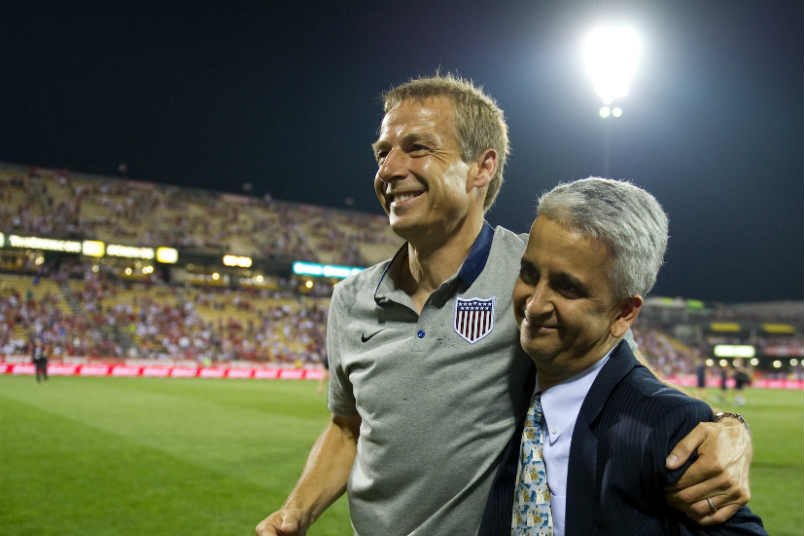 Thursday’s soccer news continues with the deluge of good advice for US Soccer from a lot of media outlets. Namely, that it’s time for them to fire head coach Jurgen Klinsmann. That Klinsmann is also technical director is only a minor issue for some. He can dismiss himself as coach and be the boss of his replacement. Or something. The key is Klinsmann out and anybody else in.

Whether or not that helps the program in the short or long-term is almost a separate question. The quick response is punishment for recent losses, adding that to a list of failures over Klinsmann’s five years in charge. Of course that has to overlook the team’s successes. That’s how this works.

Is it even worth asking whether or not there’s such a thing as media pressure in American soccer? Klinsmann himself is probably in the no category. He’s stressed the lack of day-to-day media pressure and the odd accountability it carries on multiple occasions. Meanwhile, in Europe a senior member of a national team has drinks with people at a hotel, plays the piano for some reason, and has to publicly apologize. That doesn’t really happen here, and it probably shouldn’t. The exegesis on why Klinsmann should be the ex-head coach of the USMNT is mostly civil, structured, and solid. That doesn’t mean it will have much in the way of impact, but it’s certainly worth recognizing.

So where does this leave Klinsmann? One would assume continuing to do his jobs for US Soccer. Should they decide not to act on the media’s advice, that will ebb by the time the New Year rolls around. There’s always something else to take the attention in soccer, especially when most places cover the game all over the world. Short of the Fed acting, Klinsmann as a current event will lose focus soon enough. That’s how it works, right?

FourFourTwo’s Steve Davis explains why he thinks US Soccer isn’t in a position to act quickly with Klinsmann. American Soccer Now’s Brian Sciaretta calls on US Soccer president Sunil Gulati to do something. The Washington Post’s Steven Goff argues that the time is now for a USMNT coaching change.

ESPN FC’s Graham Parker argues for Montreal’s Ignacio Piatti as the most undervalued player in the league. Goal.com’s Rudi Schuller on what Justin Morrow means for Toronto FC. MLSsoccer.com’s Steve Brisendine has words from Benny Feilhaber who along with Ike Opara is staying with Sporting Kansas City.

The Independent’s Ian Herbert explains why Wayne Rooney’s hotel piano playing doesn’t rise to the level of tabloid scandal even in England. BBC Sport reports on the real cost of going to games in England. The Manchester Evening News’ Ed Woodward looks at the increase in debt Manchester United currently carries. Backpage Football’s Kaustubh Pandey on why clubs aren’t playing for possession.