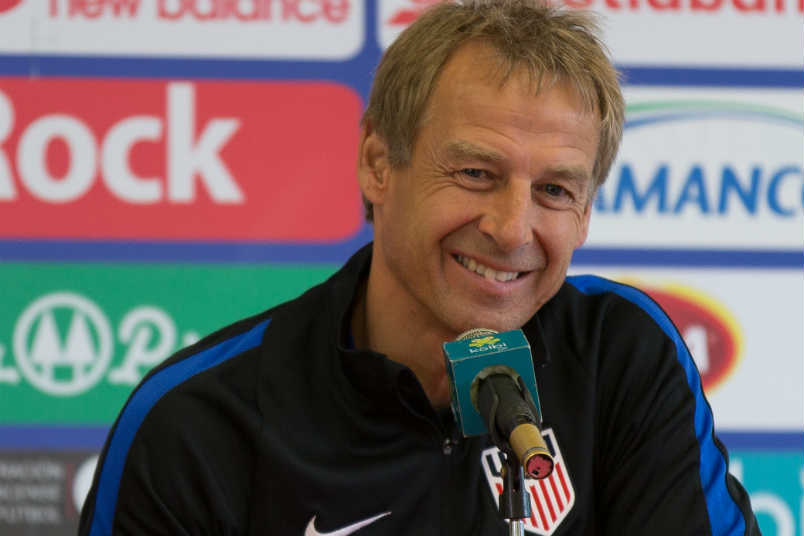 By Charles Boehm – WASHINGTON DC (Nov 17, 2016) US Soccer Players – The USMNT are 0-2 in the Hexagonal round of CONCACAF World Cup qualifying. They’re lodged in last place with a -5 goal differential after the first phase of matches. It appears that the knives are out for Jurgen Klinsmann. It’s not a nice place for any of us to be. How did we get here, and what lies ahead?

A skeptical subset of supporters and a few scattered voices in the media have called for a change for some time. Following two World Cup qualifying losses, they’ve got a lot of company. One major outlet after another has posted columns calling for Klinsmann’s departure in the wake of Tuesday’s 4-0 shelling in Costa Rica.

Even the posts analyzing the circumstances that might lead to a move are only marginally more neutral. They still put the prospect of a coaching change on the public’s mind. It’s not as if the idea is likely to fade away in the four months between now and the USMNT’s next World Cup qualifier.

Most of us know better than to think losing in November means disaster. There’s plenty of road in front of the USMNT on the way to the 2018 World Cup. The campaign is hardly doomed. The USMNT remains one of the most talented and experienced squads in the Hex. Public perception is where it is, but they’re still a favorite to advance. Still, something has changed.

It’s the manner and timing of these two defeats that has so many fingers perched on the panic button, of course. Klinsmann said that he wanted this rugged early schedule. For weeks, he played it up as a chance to make the Mexico and Costa Rica games a combined statement of intent. This is a region that the Yanks have dominated for quite some time now. The dark side of the two-headed challenge went unmentioned. Yet it’s upon us.

His bullishness wasn’t surprising. The promise of Klinsmann was a clear, cultured on-field playing identity. That hasn’t taken sustained shape. Instead, prominent and persistent optimism has become the defining element of the Klinsmann era. That quality undoubtedly played a huge role in his iconic achievements as a player. It’s also a useful one to have in his current line of work. A team needs pushing towards lofty achievements amid a great deal of noise and scrutiny. That’s the game at this level.

Klinsmann may eventually be undone by his recurring inability to tailor this character trait of his to the conditions at hand. Not every scenario is going to unfold in best-case fashion. Most of the countless other people who are invested in his team’s success are not interested in the contortions required to share his sunny worldview at the moment. Serious setbacks call for serious responses.

The man Goal.com dubbed “Coach Sunshine” in the first months of his tenure seems to have only belatedly realized the depth of the frustration and fear swirling around this poor start to the Hex. That’s not just about the past week. Those losses only reignited the doubts.

“A very, very bitter moment for us,” Klinsmann said at Estadio Nacional Tuesday night. “We didn’t imagine going into the hexagonal with two defeats right at the beginning. This is a moment to reflect [on] what happened the last 10 days. It’s not about blaming now any of the players. It’s about taking it, swallowing it, taking responsibility – which I do – and find a way to get that corrected.”

Yet even that long-overdue affirmation of direct personal accountability was immediately followed by a bizarrely jocular upturn.

“At the end of the day I said to the team that it won’t be the last 4-0 defeat in their career,” he continued. “They will get here and there some lessons. But definitely it’s a bitter moment because we wanted to do far, far better than what we did.”

I’ve been watching this program for more than two decades, first as a fan and then as a journalist. I can recall only a scant few performances as underwhelming as the one that led to that humbling handed out in San Jose. Fewer still carried the multiplier effect of coming close on the heels of an historic setback like Friday’s loss to Mexico in Columbus.

What’s alarming is not the score lines or even the dismaying details of how they unfolded. It’s the stubbornness. Maybe it’s just tone-deafness at this point. Regardless, Klinsmann clings to the status quo. The Costa Rica game presented differing challenges, and modified states of fitness and mindset among his squad. Yet he rolled out nearly an exact lineup from the one that started against Mexico, albeit in a 4-4-2 instead of a 3-5-2.

In retrospect Klinsmann’s moves were startling, perhaps definingly so. Playing an old rival in a traditional place of strength prompted him to wildly shuffle the deck tactically. Four days later, he responded to the program’s longest-standing nightmare destination (the US are now 0-9-1 in qualifiers at Costa Rica) by tossing out a same-old, same-old offering that Ticos manager Oscar Ramirez would have seen coming from miles away.

Afterwards I thought back to a subtle moment in the press conference after Friday’s 2-1 loss at Mapfre Stadium. The question was to explain two of his most prominent selection decisions, involving the central midfield and right back positions.

“If you see every training session – which you can’t, because we only let you go in for 15 minutes – you would get the confirmation,” Klinsmann said with a wan chuckle as he listed his justifications.

The man whose hiring was a new dawn of a more enlightened and transparent era was essentially asking us to take his word for it, despite a tangibly poor final result. I feel confident that no one in the USMNT press pack seriously thinks they know more about the game than Klinsmann or could do a better job than him. However, questions are part of the process, especially when things go south in match play.

The scoreboard tells us that he got his final answers wrong, and he hasn’t shown his work. Even an intro geometry teacher would struggle to give partial credit.