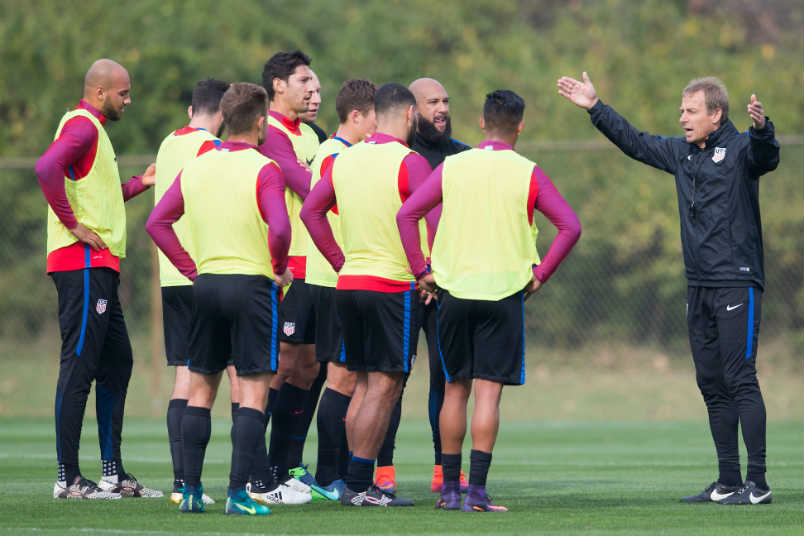 By Jason Davis – WASHINGTON, DC (Nov 9, 2016) US Soccer Players – In most ways that matter, the USMNT vs Mexico qualifier on Friday night in Columbus, Ohio represents a fresh start for the two teams. A showdown between the two biggest teams in CONCACAF is a strange way to start the final march towards World Cup qualification. It also means shedding the baggage of everything that came before.

Or maybe not. For the head coaches, moving on from the past is difficult. Though they operate in very different environments, USMNT coach Jurgen Klinsmann and Mexico coach Juan Carlos Osorio face leadership questions. They control teams that expect not only to reach the World Cup every time it comes around, but to push themselves into world soccer’s top tier.

For Klinsmann, things are good. A Copa Centenario semifinal appearance. Moving onto the Hexagonal. Players emerging that could star for his team. Christian Pulisic in particular has rejuvenated expectations around the team. His youth and clear ability as an attacking player should have an immediate impact against the best CONCACAF can offer. Klinsmann has youth on his side. Cameron Carter-Vickers of Tottenham, Lynden Gooch of Sunderland, and Julian Green of Bayern Munich are all in this squad.

There’s also the history of the USMNT against Mexico in Columbus. This is a story until it isn’t anymore. Though it might feel like overkill to continue to stress the Columbus advantage, the hype is there for a reason. It’s not that a win against Mexico is certain. It’s just hard for fans not to be positive about the possibility of a win after four consecutive instances of “dos a cero.”

The situation is different for Osorio. He’s on thin ice as the boss of El Tri. What that means for his team on the field is an open question. A coach under pressure can produce different responses, especially for the players involved in that 7-0 loss to Chile. It’s almost a miracle that Osorio even survived that exit from the Copa Centenario. MExico’s Federation makes its national team coaching decisions via the group of Liga MX club owners. They’re notorious for acceding to the whims of powerful TV interests. In other words, the Mexico national team head coaching position turns on the money involved in the Mexican game. That means a coach with a short leash and multiple bosses quick to pivot.

Osorio has certainly stumbled. A loss to the United States in Columbus, even if expected, might be enough to see him dismissed. Osorio knows he is coaching for his job, but has so far managed to say all the right things leading into the game. He has a strong team at his disposal. If the game was happening somewhere else, Mexico might be a paper favorite.

Remember, Osorio was never the FMF’s first choice. The former MLS coach got the job in an odd siutaion. His predecessor punched a journalist. Other options made themselves unavailable. It might be slightly unfair to Osorio, but few in Mexican soccer would have chosen him over Marcelo Bielsa or Jorge Sampaoli.

Klinsmann isn’t coaching for his job or his legacy. It’s a big game to be certain, but it’s also points on a larger schedule. As technical director as well as coach, Klinsmann is the architect of a program designed to do better at World Cup level. That’s the real job. Not navigating the easiest path through qualification. Regardless of the angst it may cause fans should points slip, the end result is the result.

He’ll benefit from the new talent now available. Players he had very little hand in developing to this point. That’s always the way with international coaches. Klinsmann gets credit for his willingness to turn to those players when they imposed themselves on the club level and their play demanded a call-up.

What impact will the pressure on Osorio and the lack of pressure on Klinsmann have on the game? If Osorio feels like he needs a win to keep his job, it could change how he approaches the match. That could lead to moments of panic or an over-aggressive posture.

Klinsmann doesn’t have that problem. He can play up his potential choices this week. Gamesmanship counts. Adding to Osorio’s problems by playing the mental game is part of what’s happening in Columbus this week. Come game time, Klinsmann is nothing if not consistent with his relative neutral lineups and reliance on speed in wide positions. There are some unknowns when it comes to the lineup for Friday, but those are built into Klinsmann’s attitude. A surprise here or there is less about pressure than it is about the the whims of a coach susceptible to gut decisions the rest of us can hardly understand.