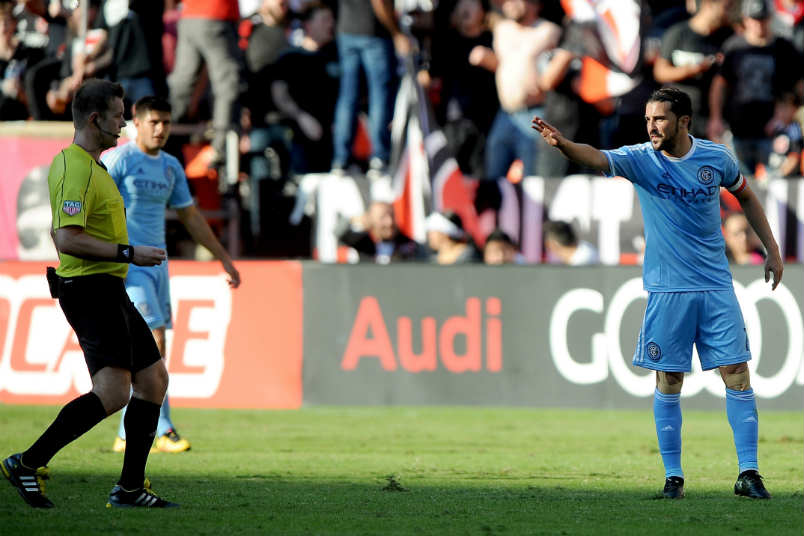 By Jason Davis – WASHINGTON, DC (Nov 2, 2016) US Soccer Players – Toronto FC’s 2-0 win over NYCFC on Sunday created a bit of controversy. It had nothing to do with Patrick Vieira’s decision to change his team’s long-standing attacking approach. It wasn’t his choice to swap out the starting goalkeeper for 33 of the club’s 34 regular season games for a backup with just one MLS game on his record.

Instead, the controversy that was the talk of MLS fans Monday and into Tuesday was the potential suspension of NYCFC star striker David Villa. It was his choice to kick out at TFC’s Armando Cooper in the 20th minute of the first-leg. Villa’s action was just one of a series of borderline violent moments in game marked by its physical intensity. There was a “coming together” of several players after the match. The anger visible on star striker Jozy Altidore’s face told the story about just how rough the match had been.

Obviously losing Villa to a suspension for the second leg would be a massive blow to NYCFC’s hopes. Villa finished second in MLS in goals this year with 23 and is a finalist for the league MVP award. Villa is, to wax poetically, the beating heart of a new club that needs both production and leadership from high profile positions like forward. Villa provides both, and in large quantities. He earns the $5.6 million City Football Group pays him to be one of the faces of their American investment.

So from that perspective, it’s good news that NYCFC won’t be without Villa on Sunday. Major League Soccer’s Disciplinary Committee decided not to hand down a suspension for Villa’s kick at Cooper, though the league did disclose that the group unanimously agreed that it was worthy of a red card in the moment. That’s problematic since referee Silvio Petrescu didn’t even call a foul. The contradiction inherent in the decision is, needless to say, causing some consternation among the MLS community. If Villa’s kick was bad enough to warrant a straight red, carrying with it a suspension, why didn’t the DisCo take the obvious action?

The cynical view is that Villa’s star power means leniency. Leagues need their stars on the field, not serving suspensions. MLS as a whole misses out if Villa doesn’t play. The larger organization whose mandate is to grow, grow, grow needs these moments. That Villa plays for a new team based in the country’s biggest media market owned by a ultra-wealthy group with interests on several continents only adds to the pressure to keep him eligible. At least that’s the perception.

Villa dodging a suspension serves NYCFC. It also serves the league from a publicity perspective. One prominent American soccer voice took to Twitter on Tuesday to identify who it doesn’t serve.

The @MLS Disciplinary Committee failed the players & coaches throughout the league because in its biggest moment it showed weakness. #Villa

Whether Villa’s kick out was violent enough in the moment to demand a decision by Petrescu is no longer germane to the discussion. The Disciplinary Committee declared it was via a unanimous vote. What is troubling is that they’re attempting to have it both ways. Bad enough for a red card, but not bad enough for a suspension. It’s a dodge, and an awkward one. Leaning on a strict reading of the words “egregious and reckless” in the language that guides their oversight only goes so far in letting them off the hook.

There’s a vast gray area in the officiating of a game involving grown adults happening at high speed. Petrescu was wrong. Or he wasn’t. He was “letting them play.” Or he failed to “control the game.” He decided Coopers high elbow cancelled out Villa’s kick, or he didn’t see either as he jogged through the center of the field toward the ball. Refereeing is quite often more art than science.

Using retroactive refereeing means all of that gray area has to be eliminated for those moments under review. If a committee of individuals is going to have the benefit of watching a sequence over and over again, in full-speed, half-speed, and super slo-mo, with a mandate to make decisions nominally meant to protect players and improve the quality of the league, any notions of leeway must be dismissed with prejudice.

It’s impossible to eliminate subjectivity from the process, but that should still be the goal.

With their half-this, half-that decision, MLS only prompted cries of preferential treatment. This does nothing to chip away at the kind of behavior Villa engaged in. That’s not just job not done, it’s a job done poorly.