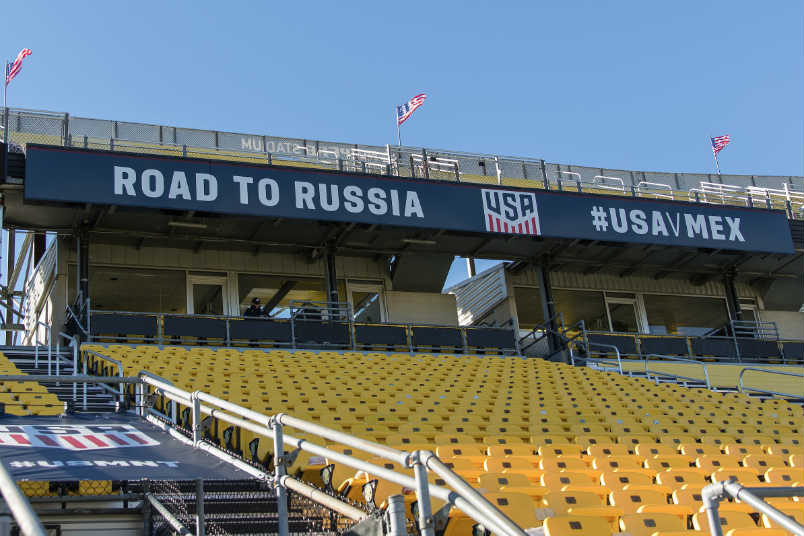 By Charles Boehm – COLUMBUS, OH (Nov 11, 2016) US Soccer Players – We’re hearing a great deal of talk this week about “Dos a Cero,” “the Curse of Columbus”, and other historical themes of the USNNT vs Mexico rivalry. Yet the result of Friday’s World Cup qualifier is no fait accompli, as the USMNT’s veterans have emphasized this week.

The game’s outcome will hinge on several key match ups in pivotal areas of the field – and perhaps in the technical area, too, as coaches Jurgen Klinsmann and Juan Carlos Osorio match wits. Here are a few pressing questions whose answers will determine how the Hexagonal kicks off for these two rivals.

Two up front vs three at the back?

With a surfeit of center backs and precious few true fullbacks, Mexico seem certain to play a three-man back line. A big part of that hinges on Osorio’s expectation that the US will field two strikers, as they often have lately in the form of Jozy Altidore and Bobby Wood.

It’s certainly possible that Klinsmann will try to toss him a curveball, using a 4-3-3 or 4-2-3-1 shape instead. That would help connect the midfield and attack, and could allow the likes of Michael Bradley, Jermaine Jones, and Sacha Kljestan to form a formidable central midfield triangle. It also fosters attacking width, a key to exploiting the edge spaces Mexico’s 3-4-3/3-3-3-1 likely offers.

That also forces a choice between Altidore and Wood up top, or pushing one into a less comfortable role out wide. That would have a knock-on effect on other personnel decisions. Many of the Yanks have generally appeared more comfortable in a two-striker system.

Geoff Cameron has been a mainstay of this US team for years. In 2016, he’s crafted a trusted center-back partnership with John Brooks. An injury has kept him back in Stoke this month, however. Klinsmann has several proven options to fill that gap, starting with Omar Gonzalez, Matt Besler, Michael Orozco, and Steve Birnbaum.

Each one offers their own particular attributes depending on Klinsmann’s wider priorities. Gonzalez brings towering size and strong recent form. Both he and the versatile Orozco – who’s been Mr. Reliable for Club Tijuana this year – are familiar with Mexico’s domestic players. Besler is a left-footed option with a cerebral, calming demeanor. Birnbaum’s passing range and aerial nous are substantial.

Coaches generally prefer battle-tested veterans in big games like this, and both sides have duly called in plenty of familiar names. Will El Tri’s inglorious past in Ohio complicate the outlook for Rafa Marquez, Javier Hernandez, and others who’ve felt those disappointments before?

“We’ve had good results here and it instills us with a certain confidence,” US midfielder Alejandro Bedoya said. “For Mexico, I really don’t know how it is for them but I’d imagine they feel a little bit of pressure, that they have to win here.”

Perhaps some fresh outlooks are needed for El Tri. Or maybe the vets are more motivated than ever to use this occasion to vault into a new future. Osorio – a former US resident and MLS coach who knows the Americans as well as any Mexico coach ever has – has called in sports psychologist Imanol Ibarrondo to help guide his team let go of any mental baggage.

“On paper there’s no reason why Mexico can’t go up there and get a result,” ESPN FC’s Tom Marshall told USSoccerPlayers.com this week. “This is a Mexico team with really something to prove and there’s a lot of players in their prime now – you’re talking about Chicharito, [Hector] Herrera, [Andres] Guardardo, [Miguel] Layun, who at some point want to do something great with this national team, want to make a statement. They’re really good professionals and they’ll be absolutely desperate to go up there and get a result against the States.”

The US have scored the lion’s share of their “Dos a Cero” goals over the years via set-piece opportunities. They’ve certainly got other arrows in their quiver. However, El Tri have tabbed restarts, long-balls, and other forms of aerial assault as Friday’s top menace.

Osorio has said that his lineup will be heavy with tall, physically strong players to match the USMNT’s size and athleticism. Will he follow through? Can the US dodge that tactic with a wrinkle or two of their own? It’s one major battle in what promises to be a fascinating chess match.