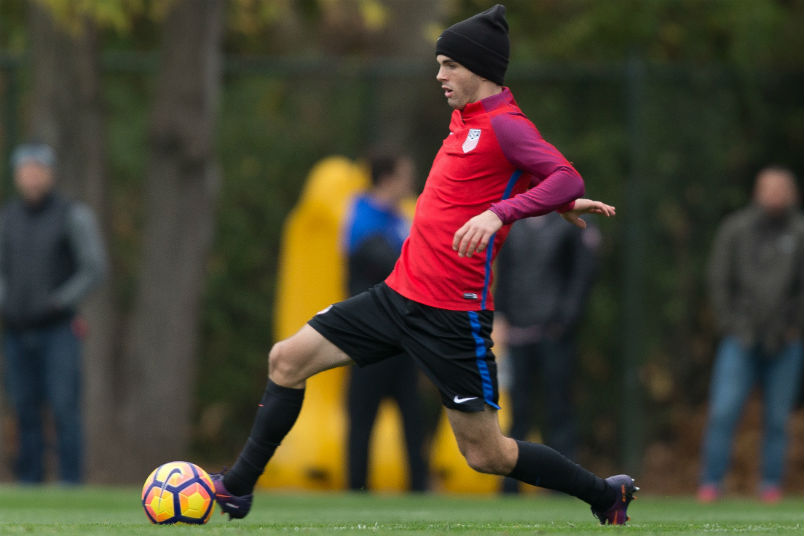 By Jason Davis – WASHINGTON, DC (Nov 11, 2016) US Soccer Players – The biggest game of any World Cup qualifying cycle for the USMNT is the home match against Mexico in the final round. That game arrives early this time around. USMNT vs Mexico opens the Hexagonal in Columbus later tonight (7:45pm ET – Fox Sports 1).

Just hours ahead the game, here is a roundup of some of the story lines dominating the coverage of the game.

Once upon a time (read: a few months ago) Christian Pulisic was a superstar-in-waiting. US Soccer carefully him from the harsh glare of the media spotlight. Jurgen Klinsmann’s decision to call up the then-17-year old put a hype machine in motion around the talented kid from Hershey, Pennsylvania. It was clear that US Soccer had no interest in helping that machine go into overdrive.

With the USMNT starting its final push for Russia 2018 and with Pulisic already a key cog in Klinsmann’s team, that’s changed. Pulisic has been the subject of numerous in-depth profiles, both written and broadcast. It seems like every outlet has something on Pulisic’s path to success in Germany and with the USMNT. Pulisic appeared on Colin Cowherd’s Fox Sports radio and television shows, talking about his experience and humoring Cowherd’s basic questions about his game.

There’s no turning back now. As Paul Tenorio wrote at FourFourTwo on Thursday, Pulisic is the new face of American soccer whether he wants to be or not. Much of that is down to his prodigious talent. Some of it is the need to put the focus on a star player. With Landon Donovan’s international career over and Clint Dempsey sidelined, the spotlight falls on an 18-year old with fewer than 30 senior level games on his record.

Fortunately, Pulisic looks ready to handle the pressure, both on the field and off.

Klinsmann’s choices for Friday night’s clash with Mexico seem simple enough. With Geoff Cameron out injured, Klinsmann needs to pick a center back partner for John Brooks. At forward, he must decide if he wants to give Jozy Altidore a striker partner. If Altidore goes solo, that opens up options in the midfield. In essence, it’s a question of getting Jermaine Jones and Sacha Kljestan onto the field at the same time.

There are other choices possible. Like who to start on the right flank both in the midfield and fullback. So much flows from Klinsmann’s preferred formation.

Omar Gonzalez has the strongest case to start in the back. Though the U.S. loses some speed with the Pachuca man in the lineup, Gonzalez is excellent in the air and has a knack for emergency defending. In the midfield, Klinsmann can again rely on Jermaine Jones and his madcap style to cover ground at both ends of the field. If Jones is healthy enough to play an hour, there’s little reason to think he won’t start alongside Michael Bradley.

If Klinsmann decides to put Altidore alone up top, what does that mean for Bobby Wood? In a two-striker setup Wood is the obvious partner for Altidore. The Hamburg forward could also feature on the right side of an attacking line of three that sits behind Altidore. The Americans lose something defensive from that position if Wood starts over Alejandro Bedoya. Still, Klinsmann could see the added attacking element as more important at home.

There’s no avoiding Tuesday’s presidential election and the political aspect of USMNT vs Mexico. For years, USA-Mexico has taken place in an atmosphere fraught with questions over immigration. Those tensions sometimes played out in ugly ways in small scale interactions between fans. Rarely did they rise to became a bigger issue in what should always be an intense, but friendly, exchange.

No one knows yet what to expect out of the fans of either team when 20,000 people cram into MAPFRE Stadium for the latest edition of rivalry that needs no extra fuel to burn white hot. Assuming trouble is unfair and irresponsible, but it would be equally wrong to suggest that politics won’t impact the game at all. Several press outlets have played up the possibility of chants referencing the political rhetoric of the past year, going as far in some cases to take such a happening for granted.

Those with the power to help diffuse any ugliness before it starts are doing so. The Americans Outlaws, the largest of the US supporters groups, have been aggressive in reminding its members (and, by example, everyone else) that this is a sport that unites and that fans should act accordingly. There’s at least some reason to hope that Friday night will be mostly about the soccer and only a little about the politics of the moment.