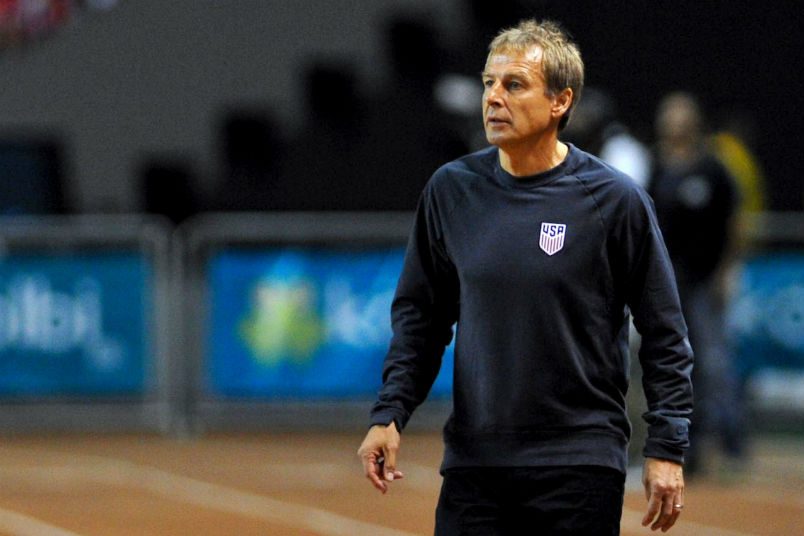 By Charles Boehm – WASHINGTON DC (Nov 25, 2016) US Soccer Players – It’s often said that whatever doesn’t kill you makes you stronger. The trajectories of the past few USMNT head coaches would seem to provide a corollary. What helps you survive and thrive in the job will make your position untenable.

The US Soccer Federation hired Jurgen Klinsmann on July 29, 2011. They dismissed from the USMNT’s head coaching post on Monday. He led the program for a shade under 2,000 days. During that time, his team infused its supporters with every emotion on the spectrum of fandom.

A genuinely kind person by most accounts, Klinsmann was confident, usually chatty, and rarely stingy with his broad smile. His strength of conviction never wavered, at least not in the open. He was resolutely player-centric, urging his pupils to chase their destiny and progress to new heights both individually and as a group.

“I simply want to say ‘thank you, thank you, thank you’ to all of you for an amazing ride over the last five and a half years,” Klinsmann said in a gracious video he posted on his Twitter feed after his firing. “It’s been an amazing experience, it’s been a huge, huge honor to lead the national team over that amount of time. We’ve had some amazing experiences together.

“A very, very special thank you, I want to say, to all of the players. The response from them yesterday when the news came out is overwhelming. all the text messages, all the calls I received from the players, of support, is very emotional for me, and I really, really appreciate it. I just wish them the best of luck.”

Yet in the end his inability to fully convey his tactical and philosophical ideas left his team adrift in familiar waters. US Soccer hired Klinsmann, re-signed him, and paid him well to navigate a course to unprecedented achievements. That gambit showed real promise at times. However, all it took to unravel was a rough start to the Hexagonal round of CONCACAF World Cup qualifying. Struggling to qualify was never part of the mandate for Klinsmann or anyone else.

Does anybody need reminding of the notable milestones along the roller-coaster ride that was the Klinsmann era? There were memorable friendlies. The 1-0 upset of Italy in Genoa back in 2012. The 4-3 slugfest win over Germany at a jam-packed RFK Stadium to mark US Soccer’s 100th anniversary a year later. A jet-setting, exhilarating, and at times fraught World Cup adventure in Brazil. CONCACAF qualifying banana peels in Jamaica, Honduras, and Guatemala. The hard-earned successes and frustrating shortcomings at the Copa Centenario.

Klinsmann broadened our conception of what’s possible in terms of results. He also lowered the floor in terms of worst-case scenarios that we thought were in the past.

Matters ebbed and flowed with similar dynamism off the field. Klinsmann brought a cult of personality to the USMNT helm that few to none of his predecessors, and probably few of his successors, too, could match. That provided him with both the will and the freedom – some would say the directive – to stir the pot. That led to outspoken critiques of MLS, American soccer culture, and even (perhaps especially) his own players.

It seemed like wasted energy at times. But it was also needed at this particular juncture in our history. Like the National Team’s basic competitiveness, American soccer’s survival has become assured enough for some to grow complacent about the way forward. Klinsmann offered a globally-minded view on how far we have left to climb.

Those messages finally grew too irritating to too many after five years. That certainly doesn’t mean he was all wrong.

For all his quirks and flaws as a tactician, decision-maker and leader, he was always, well… Jurgen Klinsmann. His tenure began with a primordial rush of endorphin among many who care about the USMNT. Finally, someone who has been there was willing and able to take the job.

Smart, successful, famous, charismatic, and a California youth soccer dad to boot. Whatever you think of how his regime fared in the end, you have to recognize that Klinsmann was truly irresistible to Federation president Sunil Gulati. It’s still far too early to attempt a final reckoning of the work.

Those of us with familiarity of the many issues at the grassroots levels were consistently left wanting more from his administration. Still, he may well have planted some seeds that will germinate and blossom years down the road. That goes for his players, too, many of whom may never again get to absorb the wisdom of a World Cup winner up close.

With passage to Russia 2018 suddenly uncertain, the Fed traded bold experiment for the anodyne familiarity of former boss Bruce Arena. During the conference call introducing Arena, a report asked Gulati about the big picture success of the Klinsmann era.

“The seriousness with which players may approach the game and their craft is one of those things,” he said. “I think you will see some things that have happened in terms of our grassroots programs and what we call our ‘Zone 2’ programs, whether that’s the [Development] Academy, all those programs. The shorter-term issues, things like new players that have been brought in, whether it’s Christian [Pulisic] or Bobby Wood or Jordan Morris.”

“Off the field… Jurgen, by who he was as much as by what he did, elevated the program in terms of publicity, its awareness, not only in the United States, around the world. That’s a positive thing for the sport and for the National Team. I think those are all pluses and we’ll see some of the dividends of those.”

American soccer is continually obsessed with the concept of progress. It’s an elusive metric at most times. Now is certainly one of them. The FIFA World Rankings aren’t much consolation here. The current rundown has the US in nearly the identical position as they occupied the month Klinsmann took the job, some two dozen rungs down the ladder from the top of the mountain.

Klinsmann’s methods and results have dramatically polarized opinions. If we’re serious about being a mature soccer nation, that’s something we must get used to. One thing we should have no trouble agreeing on, though. It’s time to set aside our quarter-century-old narrative of constant advancement. There are no shortcuts left, via rock-star managers or otherwise. There also aren’t any guarantees in the world of soccer, not even in CONCACAF.

Even when it wasn’t his intention – though it often was – Jurgen showed us that, in both words and deeds. For that, we should be grateful.