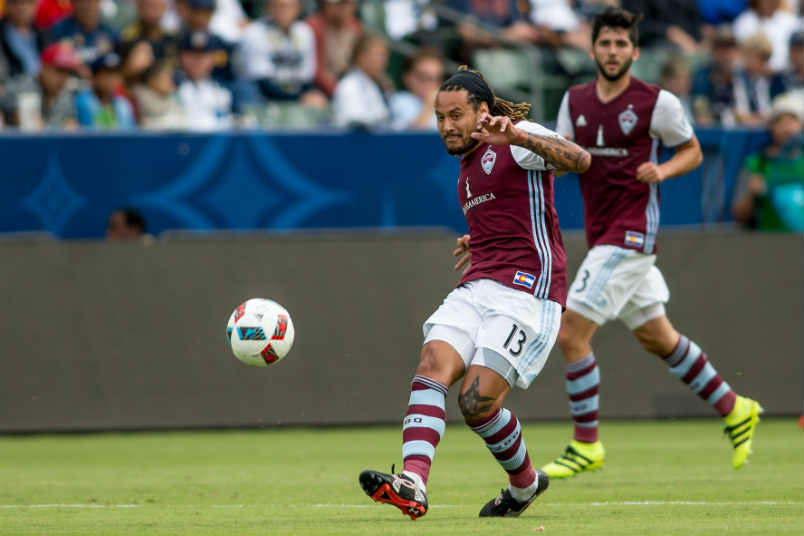 By Jason Davis – WASHINGTON, DC (Nov 4, 2016) US Soccer Players – MLS tries again with another Sunday of soccer. Four games will decide the conference finals, with the potential for four upsets already in the works. With 90 minutes left for the favorites to salvage these series and with them their seasons, we’ll see creative answers to obvious problems. That means the league’s most capable coaches trying to figure out how to avoid disappointment. To get there, they’ll need the best from key players. Here are four of them who could turn the Western and Eastern Conference semifinals around.

The Rapids are down a goal to the LA Galaxy, just about the last team anyone wants to be trailing in a playoff series. Bruce Arena’s penchant for navigating the playoffs and his club’s ability to clamp down on opposing attacks means Colorado has a very difficult task in front of them at Dick’s Sporting Goods Park. That’s would be true even if goals didn’t come at a premium for Pablo Mastroeni’s team. The third-year head coach chose a very specific path to success in 2016. Though it worked wonders, it doesn’t involved throwing numbers forward and putting pressure on opposing defenses.

That’s where Jones comes in. Just back from an injury that was more serious than anyone in the league knew, the US international should be fresh for the fight. Jones’s style of play makes any rust he might have less of a concern for Mastroeni, because if the midfielder lacks sharpness on the ball, he can impact the game with his defensive recoveries, late charges into the box, and long-range shooting ability.

The only real question surrounding Jones’s potential impact is if he starts. As of Thursday, all Mastroeni would divulge is that he’s “trending in right direction to get more minutes” than he did in a substitute appearance last Sunday.

The other match up out West involves Supporters’ Shield winners FC Dallas against the Seattle Sounders. The Sounders arrive in Texas carrying with them a 3-0 lead from the first leg. Oscar Pareja’s team needs goals, and they can’t wait around hoping they’ll just fall into their laps.

Rosales isn’t exactly the “answer”, but he could help FC Dallas be more dangerous in their quest for the comeback. Pareja doesn’t have many creative options, so Rosales almost demands time on the field to help Michael Barrios, Maxi Urruti (or perhaps Carls Ruiz), and Tesho Akindele get looks on goal. Rosales is not the equal of fellow Argentine Mauro Diaz, whose absence is defining the playoffs for FC Dallas. He is a more forward-thinking player than any of the trio of midfielders Pareja deployed in the first leg in Seattle. He’ll also help in possession, an area of grave concern for FC Dallas after the way they ceded the ball to Seattle last Sunday.

He might not win MVP, but Sacha Kljestan is certainly one of the most valuable players on any team in MLS. Kljestan had a large hand in helping teammate Bradley Wright-Phillips win the Golden Boot, and in general made the Red Bulls attack go this season. No one in MLS had more assists, and no one in MLS played more key passes per game than the recently rechristened US midfielder.

Those stats and their influence on New York’s fortunes this season are why Kljestan’s less-than-stellar game against the Impact last Sunday was so troubling. Kljestan’s consistency was one of the hallmarks of his 2016 and a major reason why he’s an MVP finalist. Almost every time out, he holds the ball while while at the same time picking up his head and finding teammates in dangerous areas. In the first leg, Kljestan lost the ball six times and completed 74% of his passes.

At home in the second leg, Kljestan’s play could decide whether or not the Red Bulls advance into the Eastern Conference final. New York needs the excellent Kljestan, the one who made them go all year on the attacking end of the field, to come up big with his team down a goal.

David Villa is going to be David Villa. Maybe he won’t score, but he’ll put pressure on Drew Moor and the back line of TFC while his team goes looking for the two goals they’ll need to push their season beyond 90 more minutes. If Villa is good and occupying defenders, that will leave room for the deadly late runs of Lampard out of the midfield. Lampard entered off the bench in the first leg of the Eastern Conference semifinal and played 30 minutes, but should be ready and fit to start Sunday’s deciding match.

NYCFC boss Patrick Vieira has to change his approach after falling behind 2-0 in the series. Maybe that means reinserting Tommy McNamara and/or going back to the 4-3-3 that represents the team’s 2016 identity and helped the rise to second in the conference. It should certainly included relying on the experience and knack for scoring Lampard possesses to pull NYCFC back into the series. The second year franchise will no doubt be buzzing in front of large Yankee Stadium crowd. There’s no better player to harness that energy and turn it into goal to chip away at TFC’s lead than Lampard.

The Englishman will face the challenge of battling Michael Bradley all day for midfield supremacy. But Lampard has made it his habit over the entirety of his career to make even the best defensive players look silly with his well-honed ability to arrive in the box at just the right time. NYCFC is anxiously waiting that arrival.