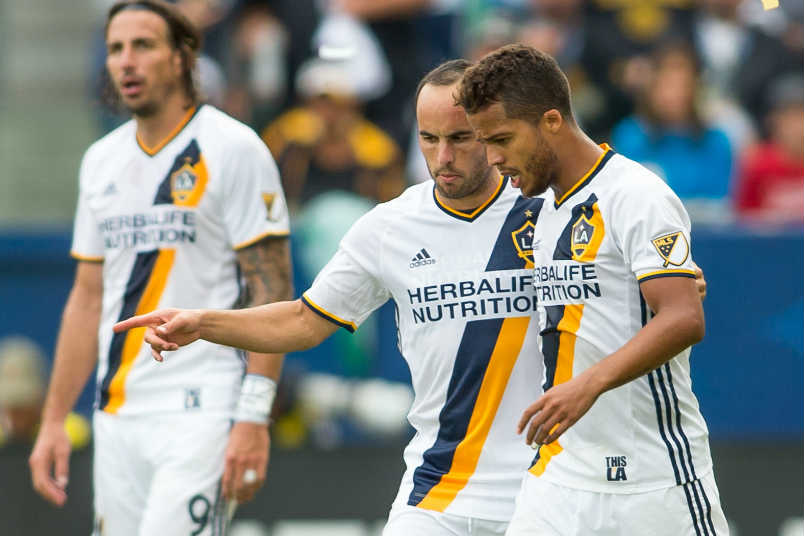 By Luis Bueno – RIVERSIDE, CA (Nov 2, 2016) US Soccer Players – In 2009, the LA Galaxy was involved in a critical Western Conference Semifinal match up that led to a drastic change in fortune between two franchises. The Galaxy beat then-rivals Chivas USA and went on to reach MLS Cup. Chivas USA failed to reach the playoffs in any of the next five seasons before folding.

The stakes might not be quite as high as they for both sides in 2016 but for the Galaxy the payoff could be as rewarding. The Galaxy will face Colorado in the second-leg of the Western Conference semifinal. If the club can maintain its 1-0 aggregate advantage would take one step closer to MLS Cup.

A series victory would rejuvenate a team that did not live up to preseason hopes and expectations. Miss out and a lot rides on an organization’s ability to make the right roster decisions. That’s not a given for the LA Galaxy.

The Galaxy’s self-proclaimed “Race to Seis” will gain traction with a victory over Colorado. Like no other team in the league, the Galaxy play tremendously well with confidence. That swagger highlighted the Galaxy starting in 2009. Back then, the club got past Chivas USA and reached MLS Cup. They lost to Real Salt Lake on penalties, but it started a run that lasted all the way through 2014. That’s when Landon Donovan led the Galaxy to the club’s third MLS Cup in a four-year span.

Donovan retired following that championship, but he’s back. With him comes the feeling that the old Galaxy might return. Getting out of the knockout round and past the Rapids opens up the West. Especially if they’re facing an equally unheralded playoff team in the conference final. This team would be all but unstoppable in the Western Conference Final, likely against a Seattle side the Galaxy has dominated in postseason play. That’s a stark difference from when plenty of people, including this one, were writing off their postseason.

Gio dos Santos also stands to gain from a victory. Robbie Keane came off the bench in the first leg and Steven Gerrard did not even dress. The two Designated Players are all but out following this season. If dos Santos can show he is capable of being the team’s go-to player, it would make sense to bring players in who would fit around him and his abilities.

Already the team has shifted around to allow dos Santos to be the focal point. Keane did not start against Colorado in part because of this. Alan Gordon earned his second consecutive playoff start. After scoring one goal and adding two assists, he’d earned it. That production was in part due to Dos Santos’ play. Dos Santos is most effective when Keane is not around. He’s scored all but one of his 14 goals when Keane was not on the field.

Dos Santos still needs to show toughness and grit in the postseason,doing what it takes to get the result. In other words, the kind of leadership LA can lean on. He’s already showing as much.

“His work rate has been terrific and he put in a lot of work over the past two games,” Donovan said after the first leg. “I’m not sure he’s worked that hard in a long time, and he was tired after the game and you can see it but he’s doing it because it helps the team win.”

With dos Santos guiding the Galaxy to MLS Cup 2016, he would clearly show he is ready to take hold of this franchise and guide it back to prominence. That’s a role Gerrard might have stepped into, so credit dos Santos for making it his.

It might read as a bit much to suggest that Colorado finding a way to knock the Galaxy out is a failure. That said, LA put themselves in the position where that could be the case. From 2009 through 2014, the Galaxy reached four MLS Cups and lost out in the conference final another time. They based personnel decisions on how to improve those teams, not on how to get to the playoffs or out of the early stages.

Already there has been one name linked to the Galaxy. Wayne Rooney is on the outs with Manchester United and, as usually happens with on-the-outs big-name players, there’s a link with the Galaxy. Of course, the club has had a prominent English player for eight of the last 10 seasons. Bringing in another one makes some sense, whether or not it’s the wisest choice.

The way to avoid that is to get past the Rapids. If this is truly dos Santos’ team then the Galaxy will do that, which would open the door to more MLS Cup appearances in the coming years. If not, expect another roster overhaul and more of the same results.

This series is not sinking any team the way their 2009 series against Chivas USA did. It will change the course of the Galaxy for better or worse.