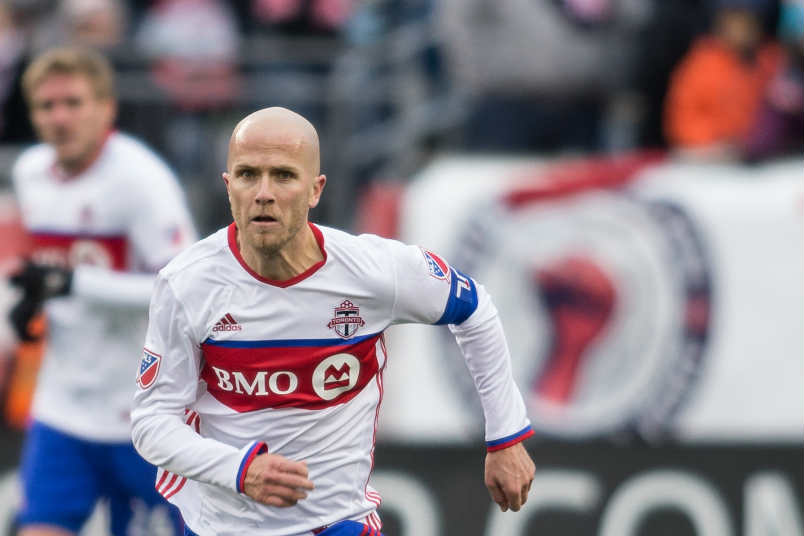 By Clemente Lisi – NEW YORK, NY (Nov 21, 2016) US Soccer Players – The MLS Eastern Conference Finals may be an all-Canadian contest, but it turns out that the home-and-away series featuring Toronto FC and the Montreal Impact will be a big showcase for North American soccer. That’s because of the USMNT talent on Toronto’s roster and that both of these cities are part of the proof that MLS is moving forward.

“This game is defiantly a showcase for Major League Soccer. These two cities have been fantastic markets for the league,” said former goalkeeper Craig Forrest, who played for Canada from 1998 to 2002. “But we (in Canada) are miles behind the United States in terms of talent.”

It’s true that it will take more than two teams from Canada to get this far into the postseason to ignite the growth of the game for our northern neighbors. In many ways, Canada is where the United States was in the 1980s. At the time, the United States had been unable to qualify for the World Cup finals, had no pro league and its player development system needed a major overhaul.

The Montreal-Toronto series will be a great chance for MLS to show it’s working. Just don’t expect it to help Canadian soccer. If anything, the short-term will see American soccer as the winner in all this. For Canada, you need to wonder what would take for the game to finally get some mainstream attention in a country where there is so much potential. Both the coaching staffs and players for both Toronto and Montreal spent the better part of last week talking about how the series would be yet another chance for the game in Canada.

“Obviously, a special game,” Montreal coach Mauro Biello said during a conference call with reporters. “I think history is being made here in Canada in terms of soccer. It’s a great opportunity for Canadian soccer to grow.”

How much of an opportunity this really is remains the question. The game in Canada is at a crossroads. It’s caught between optimism and the chance to have clubs play in MLS. Canada’s recent exit from 2018 World Cup Qualifying without even making the Hexagonal was a major disappointment. Canada has only qualified for one World Cup – back in 1986 – and has been a non-factor in CONCACAF for much of that time. Winning the Gold Cup in 2000 was widely seen as a possible springboard. That turned out to be a one-off achievement. More recently, Canada failed to qualify for the U-17 and U-20 World Cups in 2015 and the 2016 Rio Olympics. Even with three Canadian teams in Major League Soccer, it is MLS that benefits the most from this arrangement.

What makes matter worse is that Canadians count as international players, while Americans are not. While each team gets eight international slots, the rule means less space for Canadian citizens on a team’s 24-player roster. MLS has said the rule is there because of US immigration laws.

“It is always going to create a glass ceiling when a Canadian passport makes you a second-class citizen in a league where three of your teams play,” CONCACAF President Victor Montagliani, who also serves as head of Canada’s soccer federation, told The Guardian newspaper in September. “We have been trying to address the issue but it has been frustratingly slow. Until that is dealt with, it is always going to be a challenge to put the Canadian flag equal to the American flag in MLS.”

Forrest, who helped Canada win the Gold Cup and now works as a broadcaster at Canadian-based Rogers Sportsnet, agreed. He said Canadian players are “absolutely” second-class citizens in MLS. “We need to have a star player like we did with Dwayne de Rosario. Toronto has been particularly strong with its youth development and producing some really good players, but there are just so many of them that can make the first team. It becomes a question of whether they should try to play in MLS or go to Europe.”

Forrest, who played professionally in England, said the growth of the game in Canada “is a very slow evolution” and admitted there are “components that are dysfunctional like producing youth talent.” He noted that the CSA’s decision this past August to name his ex-teammate, former Canada international Jason deVos, in the newly-created role of director of development as a step in the right direction.

Some say the answer is for Canada to start its own pro league. That’s an interesting argument in a season where a Canadian team will play for MLS Cup. Toronto might not help with a pro-MLS rebuttal. Toronto FC has USMNT stalwarts Michael Bradley and Jozy Altidore. In addition, there’s veteran defender Drew Moor and head coach Greg Vanney and his assistant Robin Fraser. Both Vanney and Fraser earned caps for the US National Team.

“Teams like Toronto FC, for example, want to put together the best roster it can. That means going out and signing the best players no matter what nationality they are. I would like to see more Canadian players involved. We need more Canadian superstars,” Forrest said. “There are too few of those in the league.”