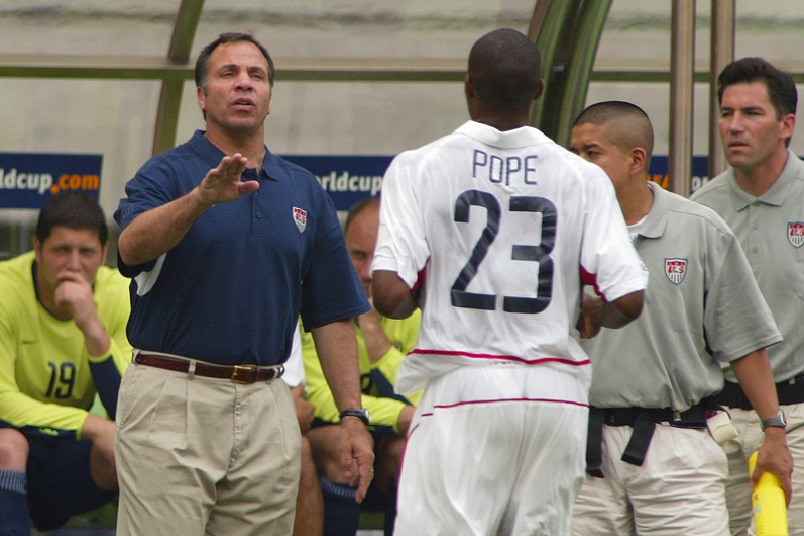 By Clemente Lisi – NEW YORK, NY (Nov 28, 2016) US Soccer Players – Questions continue to swirl about what the second coming of Bruce Arena as USMNT coach means for the team. What tactics will he use? Which players will he start? What does it mean for the players Jurgen Klinsmann had brought into the mix? Which youth players will see minutes? These are also legitimate questions as the team heads into January camp with a slate of World Cup qualifying games scheduled for next year.

A look at Arena’s past holds the answers to these key questions. That is the great thing about US Soccer’s decision to hire Arena. He is a known quantity, someone who has delivered results in the past on both the club and international levels. What we know is Arena prefers the 4-4-2, but has been flexible on tactics and formations based on injuries, suspensions, and opponents. He relies on a sturdy defense and a midfield that has players who link up well with the offense. Arena also isn’t afraid to give young players a chance.

Though Arena does seem to value experience, he’s also been a big advocate of integrating youth talent into any team he coaches. At the 2006 World Cup, he had seven players over age 30 on the roster. At the 2002 World Cup, where the United States reached the quarterfinals, Arena had 10 players over 30. Nonetheless, that 2002 team is most remembered for its younger players – Landon Donovan, DaMarcus Beasley and Josh Wolff – rather than its vets. That World Cup also featured the US’s greatest dos a cero win over Mexico, something Arena did not chalk up to his coaching.

“To be honest, I think a lot of people get hung up on formations,” he told USSoccer.com in 2013 when speaking about that victory. “At the end of the day, I believe that we had 11 players that played better. We had a very good team. Everyone in our business knows that formations fluctuate; they change on each and every play.”

That’s the beauty of Arena’s techniques. He can be both consistent in his formations and player selections, while also adapting to whatever situation may arise on the eve of a game. That is why Arena has been so successful during his prior stint as USMNT coach. He also isn’t afraid to attack early on in the hopes of scoring first. That strategy allowed for a higher success rate in short tournaments like a World Cup. While it was fun to see heart attack-worthy games under the Bob Bradley and Klinsmann eras that involved last-gasp goals, we are not likely to see that under Arena.

At the same time, Arena has had a knack for getting the most of his older players by mixing them with its younger stars. That bodes well going forward for veteran MLS players who Klinsmann largely ignored – like 31-year-old Brad Evans and 30-year-old Lee Nguyen – and younger ones already on the team such as Christian Pulisic and Bobby Wood. Arena is the one who gave a then-18-year-old Landon Donovan a chance to excel at the National Team level and helped nurture defender Eddie Pope into one of this country’s best-ever defenders during his time as DC United coach.

This mix is something that has allowed the United States to stay competitive in the region for the better part of two decades. Klinsmann was supposed to radically change the way this country develops players with the added hope that it would improve the US’s fortunes internationally. It didn’t exactly go as planned. By going back to the future with Arena, the National Team can move forward with qualifying for the World Cup as well as look to get out of the first round once it reaches Russia 2018. Arena can still get a lot out of this player pool and whoever else he wants to include in the coming months. This is a team that can still emulate the recent success teams like Iceland and Costa Rica had at major tournaments.

What are the next two years going to look like? Here are three time his reliance on young players paid off:

DC United won Major League Soccer’s inaugural championship, and it did so with a goal by Pope under a driving rainstorm. If the game proved anything, it was Arena’s ability to adapt his lineup to adverse conditions. Arena used a 4-3-1-2 to start the game, but that morphed as the rain grew worse and the field became weighed down by the downpour.

Down 2-0, DC United scored three unanswered goals – including Pope’s epic header to win it in the 94th minute – to set the franchise on course to win two more titles over the next three years for the league’s first dynasty.  Pope, 23 at the time, would go on to become one of the league’s marquee defenders and a National Team regular under Arena a few years later.

The team that had stunned Portugal in the first round found its strength in a strong midfield that effectively moved the ball to the flanks. Against Mexico in the second round, Arena lost Frankie Hedjuk to suspension and Jeff Agoos and Earnie Stewart to injury. In response, Arena modified his 4-4-2 into a 4-3-1-2 (sound familiar?), turned John O’Brien and Pablo Mastroeni into holding midfielders, Donovan served as playmaker, while Brian McBride and Wolff spearheaded the in attack.

The United States came out strong offensively early on – another trait of Arena’s teams – and quickly put Mexico on its heels. McBride scored off a Wolff assist after just eight minutes and Donovan made it 2-0 in the 65th minute.

Arena managed David Beckham and had to work with the England international to maximize his strengths. Beckham not only got off to a slow start, he had to get used to the travel and physical play. Arena smartly bolstered the Los Angeles Galaxy’s defense with Omar Gonzalez and AJ DeLaGarza in his 4-4-2 lineup. Both Gonzalez and AJ DeLaGarza came to the Galaxy via the SuperDraft both in 2009. No one knows both the college game (he’d won five NCAA titles as Virginia coach) and MLS as much as Arena.

Down 1-0 to the Houston Dynamo in the MLS Cup Final, Gonzalez scored the equalizer off a header (he was later named the game’s MVP) as Donovan and Keane scored a penalty kick apiece to ice the win. The Galaxy, defending champions at the time, would win a third title in four years in 2014, marking MLS’s only other dynasty.

“We need to build chemistry and have a common goal and really work on a team concept,” Arena said last week in a conference call with reporters after he was officially announced as Klinsmann’s successor. “We have good players and we just need to get them together as a team.”

For Arena, his coaching has been all about teamwork, astute decision-making, adapting to his surroundings, and maximizing the skills of the players around him. It’s that resourcefulness Arena will have to tap into in order to get the US back to its winning ways. Arena has done it before, and he can certainly do it again.