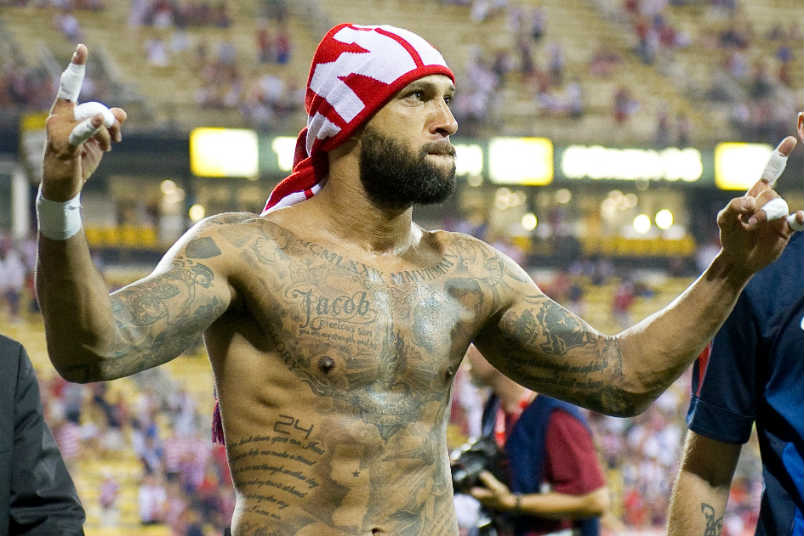 By Charles Boehm – WASHINGTON, DC (Nov 4, 2016) US Soccer Players – The Chicago Cubs just beat the Cleveland Indians in the World Series. Commercial air flights are jetting back and forth between Cuba and the US this fall for the first time in half a century. Next week, the first woman ever nominated for president by a major political party will face off at the polls with the most confoundingly unconventional candidate in modern memory.

You might say that 2016 has been a rough year for “curses,” precedents, and conventional wisdom. Could a similar shock lie in store for the USMNT?

Next week the Yanks will gather again at their favorite stadium, the unassuming edifice at the Ohio fairgrounds once widely known as “the Erector Set” because of its original reliance on affordable metal bleachers. What began as a pragmatic bit of scheduling 15 years ago has grown into a towering legend. The USA’s mastery over Mexico at MAPFRE Stadium in Columbus.

With all our jokes about “Dos a Cero” and so forth, it sometime seems that some American soccer observers have come to take the USMNT vs. Mexico phenomenon for granted. As the fifth rendition of this rivalry’s famous Central Ohio chapter looms, it’s worth remembering just what a foundational element of US soccer culture it’s become. It’s also worth acknowledging how quickly reality could puncture the mythology.

US Soccer reports that it received 56,270 requests for 16,868 tickets to next week’s big game when the ticketing lottery process opened up. Consider that the federation officially lists 23,665 as the seating capacity for this game, and that the venue’s crammed-to-the-gills maximum appears to be the 24,584 who watched the 2013 edition of this showdown.

The last meeting between these regional titans, their CONCACAF Cup humdinger at the Rose Bowl in October of last year, drew more than 93,000 spectators and over 600 media credential requests. Both that game and the 2013 qualifier drew combined domestic television audiences of around 7 million viewers each.

This month’s extravaganza will dominate the airwaves of two networks in two languages. The sports-specific channel of Spanish carrier Univision – who have dubbed it “Choque de Gigantes,” or Clash of Giants – will offer “blanket access” with nine straight hours of pre, post, and in-game coverage in addition to the primary broadcast on its mothership station. Fox Sports’ commitment is not quite so all-encompassing, but enormous nonetheless.

Back in 2001, MAPFRE (it was plain old Columbus Crew Stadium then) was originally chosen to host this affair because A) it was the only soccer-specific stadium around, and B) it happened to sit somewhere that would be unwelcoming to El Tri, both in terms of climate and fan support. Today, it’s no stretch to speculate that sooner or later Ohio Stadium, Ohio State’s 104,000-plus-capacity college football colossus down the street, might be a more appropriate venue. Even the host club Crew SC have begun their long-term planning for a future new home, amazingly enough.

While the circumstances around the match itself have evolved over the past decade-plus, the USMNT’s dominance of their border rivals has stubbornly endured. Four straight qualifying cycles have featured 2-0 USMNT wins in central Ohio. It’s happened in all seasons, in weather good, bad and ugly, and with the two teams arriving in various states of form and flow. The Yanks’ mental advantage in Columbus is by now quite clear. Each time this game shows up on the schedule, the question is can they sustain it?

In general terms, Mexico’s longstanding advantages in terms of player pool and infrastructure – though significant – have faded. Granted, some would argue a cultural one lingers. That’s the obvious undertone of the Mexican federation’s “Futbol Es Nuestro,” or Soccer Is Ours, tagline. Conversely, some would consider the US to possess superior financial leverage in several contexts. Neither side can really claim many sweeping mismatches at this point, though. The narrative that my generation grew up on, that of the bold gringo upstart catching up to the incumbent Goliath, doesn’t quite work any more.

All this would seem to suggest that parity will eventually set in as the rivalry’s modern sample size grows. The team can continue to stand toe to toe with Mexico. US Soccer might be able to ensure a partisan home crowd year after year. Those fans can provide as hostile a reception as ever. But it stands to reason that every streak must come to an end eventually, right?

It’s not what US fans want to hear right now. But it might also serve as a useful call to vigilance. Three years ago Mexico limped into Mapfre with an overriding sense of fatalism, led by interim coach  Luis Fernando Tena, fresh off the disastrous tenure of Jose Manuel de la Torre. It wasn’t their night, to say the least. They wouldn’t sort out their tickets to Brazil 2014 for another two months, via an intercontinental playoff trouncing of New Zealand ably overseen by Miguel “Piojo” Herrera.

This time, even with tough questions for El Tri boss Juan Carlos Osorio, the visitors have real reason for optimism.

Consider El Tri’s solid run of recent results, with the glaring exception of that 7-0 humiliation by Chile in Copa Centenario. Then glance at their growing list of expatriate stars at big European clubs. Osorio’s penchant for tinkering with his lineups and formations may work to the USA’s advantage. But the right preparation could give his battle-hardened squad real belief in ending their sour history in Ohio.

It’s the USMNT’s job to fend off such talk with their actions on the field. And they’ve done a pretty spectacular job of it for some time now, even if that CONCACAF Cup extra-time loss in Pasadena still stings. Just how much magic does MAPFRE have left in it? We’re about to find out.