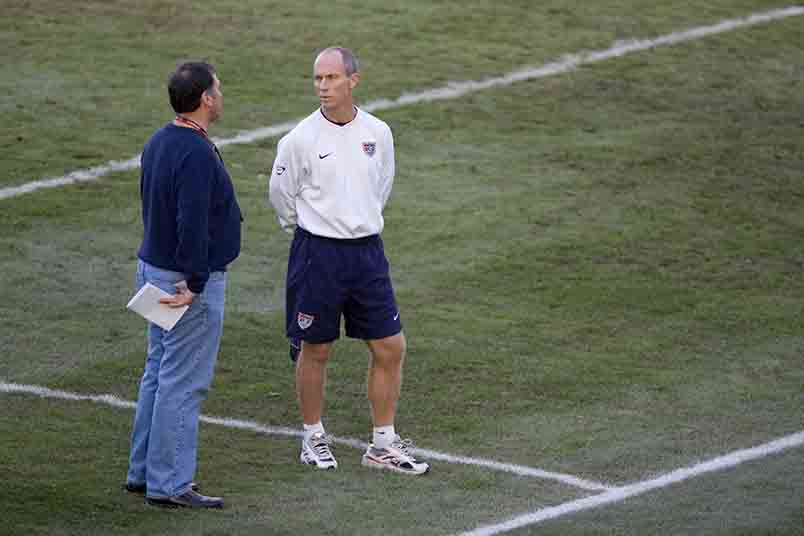 By Charles Boehm – WASHINGTON DC (Dec 29, 2016) US Soccer Players – Bob Bradley has departed Swansea City after less than three months in charge. Whatever you may think of the circumstances of his dismissal, the state of American coaching is even worse than you imagine.

I know most readers have had their fill and then some of this generally dismal calendar year. Another sobering reality check about the state of our soccer nation might not look too appealing as 2017 dawns. That said, the widespread fretting about the potential consequences of Bradley’s situation needs some important grounding.

We track, scrutinize, and cheer our players as they venture out into the wide world of soccer, and with good reason. No amount of domestic growth, however meteoric, can substitute for the measuring stick of global competition. This impacts the national teams, too. The idea, in one sense, is that when US players learn hard lessons at club level as individuals, the USMNT gets handed fewer of them as a team. When we take aim at the world elite, we are shooting at a moving target, after all.

It’s no great stretch to apply this to coaching as well. Many of us view the idea of Americans managing at the sport’s highest levels as an important barometer and tool for growth. Yet if you look beyond Bradley’s case, the number of Yanks vying to climb the ranks overseas is low. There aren’t many signs of future growth in that direction.

Even in a brief stint in charge of the Swans, Bradley endured media scrutiny, fans’ rage, fickle ownership, murmurs of locker-room discontent, and more. That is part and parcel of life in the English Premiership or any other “big-time” league, as Bradley acknowledges. It has little equivalent in MLS.

One of 2016’s biggest coaching breakthroughs was Pablo Mastroeni. Colorado gave him time to hone his craft despite woeful results in his first two seasons.

If American soccer as a body politic believes that coaches working in big jobs abroad matters, then we’re all doing precious little to make it happen. Our own domestic scene is still packed with imports from the grassroots up to the professional ranks. The US Soccer Federation’s recent moves to consolidate the coaching education pathway under its own roof may pay dividends down the line. So far, that’s served to drive up costs for both individual coaches and their employers.

I have found most ambitious US coaches to be cosmopolitan in many senses. They seek out the wisdom of thought leaders like Pep Guardiola and Marcelo Bielsa for lessons they can apply in their work. There’s little to no cultural impetus to prove oneself on foreign shores, however. Certainly not in the way that many players traditionally feel. Not when it’s relatively straightforward to make a solid living, from youth, to college soccer, to the pros, without leaving the States. Perhaps the means to do so are still too distant. In that case, we really are still walking, or even crawling, while the world’s best run past.

Few Americans dare to take a path like Bradley’s. He carved out a name in MLS and with the USMNT before striking out into the wider world. A scant few like Dennis Lukens (working in Ukraine) and Bibert Kaghado (technical director at Druzhba Maykop FC in Russia’s lower divisions) have made their way in similar fashion. It’s clearly a grind, sprinkled with the odd dose of good luck and good timing here and there. Most of the small group of US expatriate coaches had to spent years, if not decades, working their way into the fabric of a club before earning the chance to lead it.

Former USMNT mainstay Steve Cherundolo is climbing the coaching ranks at Hannover 96. That also happens to be the club where he spent his entire club career as a player. David Wagner is a promising talent on the rise. But he has coached entirely in Europe, just as he spent his playing days there aside from USMNT duty, and has scant ties to the US coaching landscape.

Californian Joe Enochs seems well ensconced as the boss at German third-tier club VfL Osnabruck. He’s been there two decades, however. Enochs arrived as a player in 1996 and like Cherundolo, grew into a loyal servant and de facto local.

Another class of adventurous Yanks – think of Gregg Berhalter, Steve Sampson, and Tim Hankinson – journeyed aboard and learned valuable lessons before returning home. That’s an important word here: home. Just like most other humans, Americans tend to have personal and profound roots on native soil. Sooner or later, the chance comes along to work in their chosen craft, with decent wages and ambitions and in closer proximity to loved ones. Sooner or later, most set aside the myriad stresses and strains of working abroad to come home and reap the benefits of soccer’s growth here.

As Chicago-area youth coach Ken Sweda (@Zone_14) noted on Twitter, Bradley is a pioneer – and that’s a key role. The “settlers” that follow tend to be just as crucial in the overall process.

It’s tricky to quantify the cost of something that isn’t happening. We can argue for days about whether US soccer’s continued progress hinges on exporting more coaches. Or just how much of a disservice we may be doing to our players by not setting our expectations as high for our coaches. As in other walks of life, globalization looks like a tough train to derail. The wider coaching world has turned its attention to these shores. Tata Martino’s arrival at Atlanta United is a prime example.

If more of our coaches can’t find a way to escape the domestic bubble, they may also find the security of home less and less certain with the passing of time.